Life was not a walk in the park in previous centuries. Unless you were born into the landed & wealthy classes, chances are you’d spend most of your life hand-to-mouth, earning today what you needed to survive today – and maybe half of tomorrow. Those of us enamoured of history tend to forget this, seeing as most historical reading focusses on those who did have, such as kings and nobles. Why? Because we know more about them than we do about little Dan who lived and died in the muddy alleys of medieval London, or Carmen who died at fifty-two after spending her entire life washing the rich folks’ linen in the scummy waters of the Guadalquivir.
Anyway; if you were poor and aspired to more, you had to be creative. If you dreamed of laying the world at your feet, you had to live on the razor’s edge, adding a titillating whiff of risk to your life. One such dreamer was Robert Cadman, born at the beginning of the 18th century. Our Robert was not among the poorer of his time. He had a profession – he was a steeplejack – and brought in good money when he was working. For those who don’t know, a steeplejack is a person who does not suffer from vertigo, seeing as these intrepid men clamber about on spires, towers – well, any buildings that rise towards lofty heights – to repair them or construct them.

People don’t build spires all the time, nor is there always a tower in need of maintenance and repair, so in between doing his real trade, Robert also did some rope-sliding, eg he was an early form of tight-rope artist, walking on a rope and performing various tricks several metres above the ground. By all accounts, he was good at this, earning good money with his shows, thereby supplementing his income.
Now, as any good entertainer will tell you, the crowds are a demanding task master. What had them going “ooo” and “aaa” one day, will have them yawning a few weeks down the line, so our Robert was always working on improving his show, a fine balancing act (see what I did here?) between adding more titillating risk without actually breaking his neck. 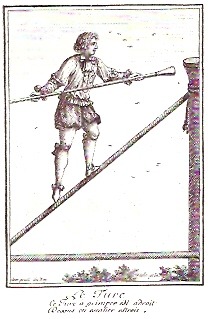 Robert lived in Shrewsbury. In Shrewsbury there was a church with an impressively high spire, named St Mary. Robert was well acquainted with this spire, having been involved in repairs at some point or other. Now, if you were up on St Mary’s spire, you could see straight across the Severn to the meadows on the other side, and one day Robert had this great idea. He would tie one end of a rope to the top of St Mary’s spire, the other he would anchor to the ground on the meadows, and then he’d perform by walking up the rope – across the river. No one had ever done anything like this before in Shrewsbury, and people were suitably impressed when he carefully walked up the sloping rope, all the way to the top.
Mind you, he did this not only in Shrewsbury, but also in other towns he visited to repair a steeple or two. To vary his act, he did odd things like hanging from his feet (I imagine he flexed them) while talking to people twenty odd metres below him. A good act, was Robert Cadman, but after he’d done that like five times, people wanted more.

Robert thought about it for a while and ended up constructing something that looked like a wooden breastplate with a deep groove in it. Once he got to the top of the spire, he slotted the rope into the groove, placed himself on his belly, and proceeded to “fly” downwards along the rope. Sort of like airborne skeleton… (and as an aside, I simply cannot consider it a sport to lie down, head first, and throw yourself down icy slopes on a little sleigh. It’s more of a suicide mission.) Not only did this require quite some balancing so as not to fall off, but there was also the added risk of fire – the friction between rope and wooden breastplate generated quite some heat.
Robert was not the only man to do a flying act. There was a gentleman who performed in Hereford despite having a wooden leg, and stunts like these were popular on the continent as well. In fact, in Venice they’d been doing “spire climbing” since the 16th century, so nothing of what Robert did was truly innovative – but people loved it anyway.

You see, earthbound man has always wanted to fly, so the audience expressing their delight with a sequence of “ooo”s and “aaa”s – no matter that they’d seen him do it before. Plus there was that titillating fact that Robert was risking his neck every time he did this (he refused a safety rope). I imagine Robert’s wife did not find it titillating – rather the reverse. Our steeplejack chuckled and told his wife not to worry. He knew exactly what he was doing, and while it looked dangerous, it wasn’t, seeing as the deep groove held the breastplate very steady. Besides, he added, they were raking in money. Yes, yes, they were, wife said, but she didn’t like it. “What if…”
“Shhh,” Robert said, placing a firm finger over her mouth. “No need to tempt fate, sweetheart.”
On a February day, 1739, Robert yet again affixed his ropes. His wife wove in and out of the assembled people, cap in hand to collect whatever coins they thought it worth to see a man defy death by hurtling towards the ground along a tautened rope. Robert was probably enough of a showman to take his time getting up to the spire, building some tension along the way, I imagine, by pretending to slip on the rope or something. The odd female spectator squeaked and hid her face against whatever male chest was available. The men laughed. Robert Cadman had done this before, they told their lady companions. Likely he’d go on doing it many years more, a man lucky enough – and brave enough – to experience some seconds of exhilirating flight.
At long last, Robert had reached the spire. I imagine him waving to the crowd below. Maybe he blew a kiss to his wife. Maybe. (I must learn to curb this romantic streak in me! Most probably he did not blow her a kiss. He was concentrating on his upcoming flight number.) As he had done numerous times before, he settled himself on the rope, ensuring the groove in the breastplate was properly in place before sliding off, downwards, towards the distant Gaye Meadows.

People cheered, Robert spread his arms for balance, looking verily like a bird. And then the rope snapped, and for some instants Robert did truly fly, soaring upwards for some instants before plunging helplessly towards the ground – and his death. As per early depictions of this tragedy he was “dashed to pieces” and his distraught wife rushed towards the heap of tangled, bloodied limbs that some seconds ago had been her breathing, living man. Now he was neither alive or breathing. Now he was dead, and she must have fallen to her knees beside him, not knowing quite where to touch him. His body would still have been warm. Maybe he twitched, and then he was truly gone, and his widow knelt beside him and wept, while the recently so rowdy crowd fell silent, the only sound that of more coins joining what Robert’s wife had already collected.
What became of Robert’s wife and children, we do not know. How they survived – if they survived -without his income, we do not know. All we know is that once upon a time, a young man dazzled his contemporaries with his daredevil ropesliding. Like Icarus, he aimed too high. Like Icarus, he plummeted to the ground and was no more.
On St Mary’s church in Shrewsbury there’s a commemorative plaque:
Let this small Monument record the name
of Cadman, and to future time proclaim
How by’n attempt to fly from this high spire
across the Sabrine stream he did acquire
His fatal end. ‘Twas not for want of skill
Or courage to perform the task he fell,
No, no, a faulty Cord being drawn too tight
Harried his Soul on high to take her flight
Which bid the Body here beneath good Night
Feb.ry 2nd 1739 aged 28
Had it not been for that plaque, I would never have heard of Robert Cadman. In fact, had he not died as spectacularly as he did, we would never have known he existed, he’d just have been one among the many, many anonymous people who were born, lived, and died without leaving any trace behind – beyond their offspring. I’m thinking his wife would have preferred that scenario.