Let’s face it: for women, things went decidely downhill with the advent of Christianity. Take, for example, my northern corner of the world.  Viking women had always had a strong position in society, in many ways considered equal to any man. A woman could raise rune stones – she could build bridges, run farms, inherit property, decide who’d inherit her property, have a say in her marriage, tell Mr Abusive Husband to sod off – an early version of “walk out the door, don’t turn around now, I don’t need you anymore“. A Viking woman was considered an adult, with similar rights as a man had.
The same thing goes for Anglo-Saxon ladies. Not much given to retiring like shy violets, these were strong independent women, snickering at such idiotic ideas as wifely obedience. Well, we all know what happened to the Anglo-Saxon ladies: the Normans – and in their wake came an army of determined priests, with the objective of wiping away any remnants of the old pagan society, such as the lunacy of assuming women were equal to men.
Some of those early Church fathers really had it in for women – misogynists, one could almost call them, except that they’d disagree, having no understanding of the term as such. Plus, they’d hasten to point out, their opinions of women were based on facts – such as it being Eve who yanked the apple off the Tree of Knowledge, stupid git that she was. (Alternatively, she was one bright girl, eager to know more) No, St Thomas and St Augustine would say, probably quoting St Paul, “man was not created for the sake of woman, but woman was created for the sake of man”. Alternatively, they’d throw in yet another quote from Corinthians: “man is the head of woman”. 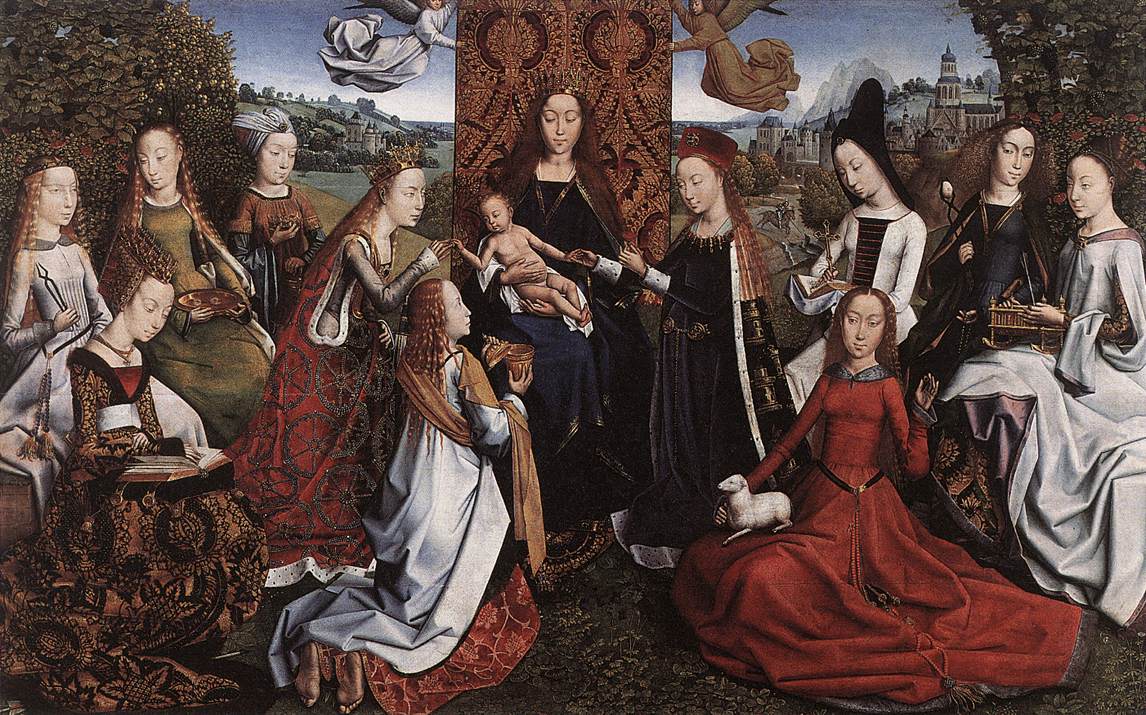 Christianity in its early forms was virulently patriarchial, which clashed with societies in which women were considered just as capable as any man when it came to managing property. Uh-uh, the Church argued, property was best managed by men, and if the woman in question stood to inherit, it was best that someone else – a man – managed it for her. Woman was reduced to a chattel: either she belonged to her father or brother, having little say in her affairs, or she belonged to her husband – having even less say in her affairs. This, of course, was not always valid. Strong women – and especially those with substantial wealth – have always managed to carve themselves an exception to the rule, but for most girls in the Middle Ages, it was very much about duty and obedience.
It wasn’t only those ancient Catholics: Church leaders, throughout the ages, have repeated ad nauseam that woman is weak, woman is defective, woman must obey. Legally, woman was compelled to obey – in some Western countries well into the 20th century, in other places she is still relegated to being a second-class citizen. At best. 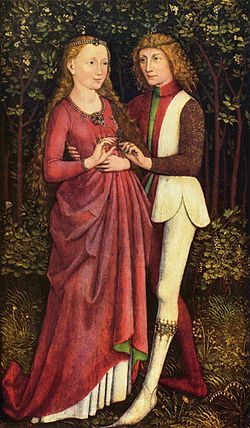 Anyway: back to the Middle Ages. A girl was born, she was married off, she had babies – and in many cases she died having babies – and then she died. If her husband predeceased her, she could, as a widow, experience a degree of freedom she’d never had before. A widow was allowed to manage her own affairs. I’m thinking there was a lot of high-fiving going about among widows…
For most women, they passed from being the property of their fathers to that of their husbands on their wedding day. A momentuous occasion, to be sure, and I do hope some of those brides skipped to church, elated at being joined in matrimony with the prince of their hearts. Many did no skipping. Marriage was a business transaction, a young fertile womb traded for influence, a rich dowry for an illustrous name. But on the wedding day as such, our little bride was the queen of the day, decked out in as much finery as her father could afford.

In some countries, brides wore crowns. Heavy wedding crowns were kept in various churches, and the brides could borrow them for the day. These crown were in gold or silver, some were massive, some were dainty. Whatever the case, they underlined the fact that on this day – this day alone – the bride took centre stage.
Often, the bridecrowns were the ones that normally adorned the statues of Virgin Mary. This led to expectations on the brides wearing the crowns. They had to be pure and unmarried. Should a little baby make its entrance into the world too soon after the wedding, questions would be asked, and heavy fines imposed on a bride who’d worn the crown while no longer virgo intacta.

In Sweden, the tradition with bridecrowns took off AFTER the Reformation. (What can I say? Not a nation of early adopters – at least not back then.) Yet again, there were expectations that any bride wearing a crown came to the marriage bed “untouched”, and as the ancient tradition of betrothal here in Sweden quite often allowed consummation prior to the wedding, one would have thought the number of young brides wearing crowns would have been low. The Reformed Swedish Church had a solution: couples who were betrothed were no longer allowed to sleep with each other. See? Easy-peasy.
Now, a virgin bride would enter the church with her hair hanging loose. This would be the last time anyone would see her hair like that, and I assume ample care was taken to ensure the hair shone with health. Once a married woman, our young bride would be expected to hide her hair permanently from view (in some cultures, the long hair was cut off – this was the case in some parts of Sweden, well into the 20th century) but on this single day in her life she was allowed to show off her crowning glory, atop which might have perched a real crown.

Not all crowns were made of silver or gold. Already in the Middle Ages, alternative crowns were made with myrtle. Why myrtle, one wonders, and I suppose the easy answer is that myrtle is associated with Aphrodite, goddess of love. The other, somewhat obscure reason, is that myrtle was once seen as a contraceptive herb. By wearing a myrtle crown, the bride was telling the world that so far she hadn’t been sipping myrtle tea, ergo, she was as pure as they came. Hmm.
Here in Sweden, myrtle crowns were all the rage in the 19th century and onwards. Mothers would plant a myrtle tree on the day of their daughter’s baptism, and then sprigs from those myrtles would be used in the future crown. I have two myrtles, purchased when beloved daughter was a baby. Myrtles are sensitive creatures requiring a lot of TLC, so chances are they won’t survive unscathed to her wedding day, but if they do, they will definitely adorn her – I hope.

To this day, some Swedish brides wear crowns – as a tradition, not as an indication of purity. Some families have crowns that have been handed down for generations – my mother-in-law wore the Belfrage crown on her wedding day, an experience she summarised as “extremely uncomfortable”. But she did look rather spectacular, IMO, regal almost.
These days, most brides do skip on their way to church. They have chosen their groom, they have hopes and dreams of a Happily Ever After with the prince of their heart. Divorce statistics of 40-50% indicates that HEA is rather elusive – or maybe expectations are too high, who knows? Our medieval bride had few illusions. She knew her duty, she knew her place – beneath her husband. Did she aspire to HEA? Rarely. Did she hope for contentment? Possibly. But on that day, her wedding day, she was, for one brief moment, a queen.
This post has been written as part of a bloghop celebrating the publication of the second volume of Customs Castles and Kings: True Tales by English Historical Fiction Authors edited by Debra Brown and Sue Millard.
Click here to read the other posts! Everything from “Deadly Cat Customs” to “Harvest Moons and Customs”… 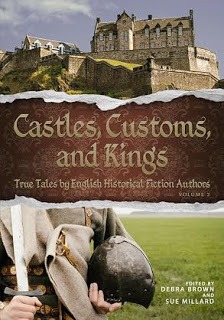 An anthology of essays from the second year of the English Historical Fiction Authors blog, Customs Castles and Kings: True Tales by English Historical Fiction Authors transports the reader across the centuries from prehistoric to twentieth century Britain. Nearly fifty different authors share the stories, incidents, and insights discovered while doing research for their own historical novels.
From medieval law and literature to Tudor queens and courtiers, from Stuart royals and rebels to Regency soldiers and social calls, experience the panorama of Britain’s yesteryear. Explore the history behind the fiction, and discover the true tales surrounding Britain’s castles, customs, and kings.
Amazon US
Amazon UK