I’m having an identity crisis. Not an exactly novel experience, as I’ve had them now and then throughout the years. As a child, it was more along the lines of not wanting to be who I am – what fun and adventure was there in being a 20th century person when one could have been born in the 17th century? Or in the 12th? (This was prior to fully comprehending just how wonderful such things as hot showers and washing machines are)
As an adolescent, I struggled with the visible changes to my body – didn’t like them one bit as it is darn uncomfortable to play rugby or football with budding breasts. Okay, so this doesn’t qualify as a full-blown identity crisis, and by then I’d given up on sitting in the dark of my wardrobe in a witch’s circle and attempting to travel back in time. (I blame the inefficacy of my attempts on the lack of cat)
Since then, there have been various moments in life when I’ve sort of had to take a step back and look at myself dispassionately (well…) and decide what I am. Career focused high-flyer or mother? Ambitious CFO or wife?
Fortunately, one can combine various parts of one’s personality, and since several years back I’ve managed to balance the mother in me with the wife and the drattedly ambitious career person. Plus, of course, as icing on my multi-faceted cake, I am also a writer.

This writing thing is similar to an addiction. It grows exponentially on you, even more so when your characters start taking on face and form, start expressing opinions about your previously so neat plot line. You see, I mostly start out with a plotline. Not necessarily all that detailed, but still, there’s a planned structure to the novel, a defined starting point and a defined end. Somehow, my characters and I do make it to the defined end, but the route to get there is often entirely different from my original plan – a case of reality being nowhere close to the map, except of course that it isn’t reality, it’s all make-believe and STIll it doesn’t conform to the make-believe map. Gah!
One would have thought by now I’d given up on plot outlines. Nope. The structural fascist in me – a side to my personality that has been nurtured through years and years working with finance – will not give up. Heck, my plot outlines are great, a balanced mix of action and introspection, love and hardships. The end result is, strangely enough, generally just as balanced, except that things happen in a different order. 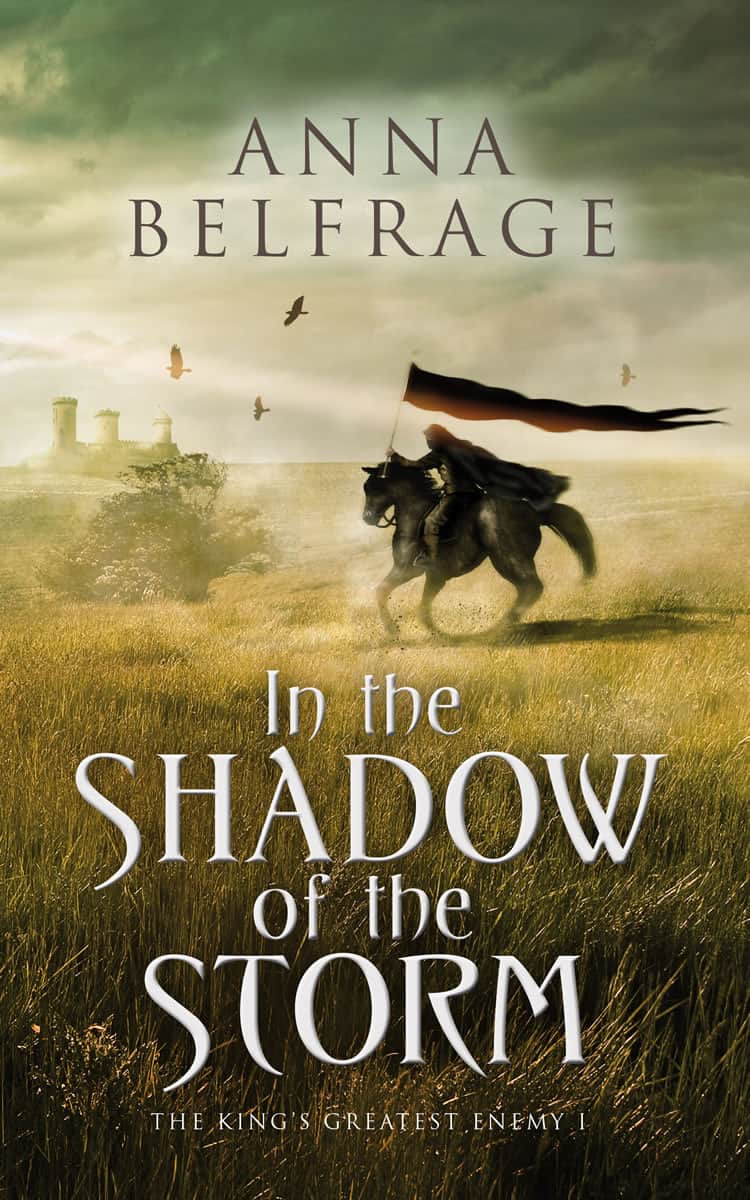 When writing historical fiction in which real people play a role, I can’t allow my invented characters to go all wild and crazy.
“Why not?” Adam de Guirande scowls, testing the heft of his broadsword. “Would the world truly be a worse place if I just offed Lord Despenser now?” Adam has valid reasons to hate Hugh Despenser, but In the Shadow of the Storm ends while we’re still in 1323, and so our Hugh has a number of years of life left to him.
“Yes. You’d be tampering with history.”
“History?” Adam limps over to me. “History? This is my life! Look at what he did to Kit, look at…” He chokes.
I decide this is not an opportune moment to remind me that he is only alive because I’ve invented him – and actually, that probably means he isn’t alive at all, even if both Adam and I are firmly of the opposite opinion.
Anyway, in this particular case, I cannot allow Adam to tamper with the outline.
Same thing happens in To Catch a Falling Star.
“He’s too young to die,” Alex Graham tells me, her mouth softening into a tender smile as she studies John Graham, a.k.a. Viscount Dundee, at present fast asleep at her kitchen table. “Too young, too vibrant, too…” She wipes at her eyes. “Can’t you just have someone whack him over the head and he can suffer a bout of amnesia and then we can send him off to France or somewhere?”
“You know I can’t do that. His death is a historical fact.” I share a look with Matthew Graham, leaning against the opposite wall of the kitchen, arms crossed over his chest. My leading man is less than comfortable with his wife’s obvious affection for Dundee. In fact, he’s jealous – but not to the point of suggesting I kill Dundee off before his time.
“But you’re the author! Do something!” Alex twists her hands together.
Beyond changing the book into alternative history, there’s not much I can do, I try to tell her, which just makes her give me a frigid look as she reminds me that I do take certain liberties, don’t I? After all, Alex Graham herself was born in 1976.
“That’s different,” I say.
“Really? How?”
“You’re not real.”
Need I say that resulted in several days of radio silence from Alex? Took me ages to cajole her back into speaking to me…
To me, of course, they’re all real: Adam and his wife Kit, my Alex and her Matthew, enigmatic Jason and his vibrant Helle. At times – like right now – I feel as if my brain is playing multiple movies at the same time:
I have Adam staring down at the lifeless body at his feet, while from outside the chapel comes the sound of booted feet, approaching fast. If they catch him…
There is Alex, overcome by grief at yet another loss, and Matthew is crouching beside her, trying to heal that which cannot be healed with his presence and warmth.
And Jason has just been shot, so there’s too much blood, and Helle is crying and wiping at her face with blood-streaked hands.
All of them are looking to me. All of them expect me to somehow move them on, save the day. Thing is, it is up to them. I just write what they tell me to write. After all, once they’ve meddled with my plot line, they’d better sort things out themselves.
After writing this post, I realise I am not suffering yet another identity crisis. Phew! After all, by now I should know who I am, right? No, what I am suffering from is an excessive bout of creativity, resulting in a head thronged with snippets of conversation, fragmented images and all my wonderful characters. And despite what I said to Alex, I do consider them to be real. As real as me and you, as loved as my family and friends – which of course begs the question whether I might be borderline delusional. If so, allow me to let you in on a secret: all writers are – more or less.

8 thoughts on “Of identities, delusions and a fertile imagination”