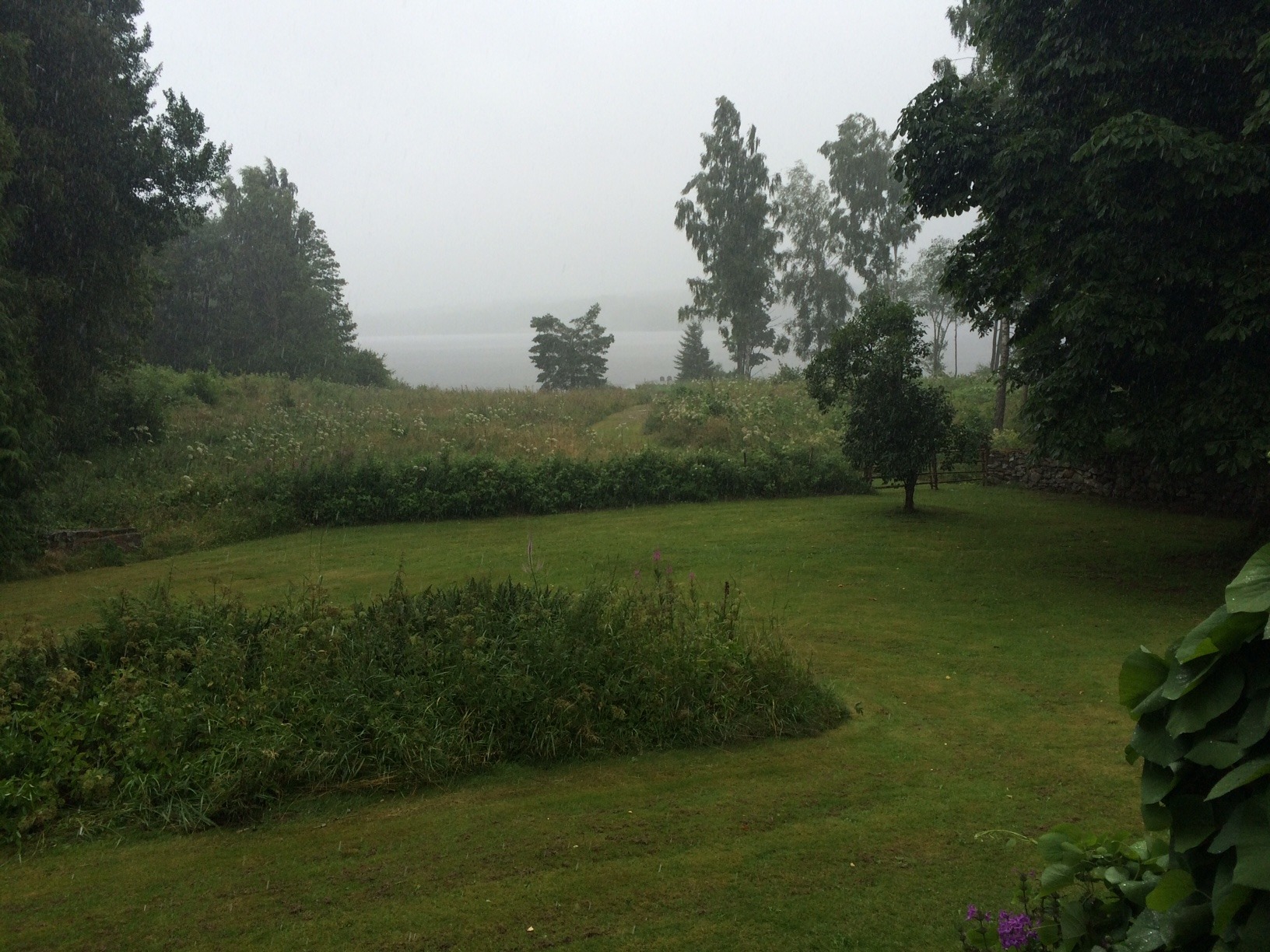 So far, this summer isn’t exactly hitting top of the pops when it comes to the weather. June disappeared in rain. July has mostly been the same, except for a week of heat. For those of us on summer vacation – and us Swedes have a religious approach to our four weeks of statutory vacation – this means more time spent indoors than outdoors, and yes, some of us complain. A lot.
This is when yours truly clears her throat. (Yours truly doesn’t much mind the rain, but that is neither here nor there) To have your vacation rain away is an irritant. No more, no less. And, yours truly adds with some severity, imagine what it was like for our poor forebears, say two centuries ago. A summer like this was not an irritant. It was a promise of famine come winter, of having to bury the babies and the old ones.
In the second half of the nineteenth century, weather conditions throughout northern Europe were pretty dismal. Sweden was to experience the worst years ever in the late 1860s, one year after the other of failed harvests. One year farmers could survive. Two were a stretch – parcels of precious land had to be sold, the plough horse ended up on the table. Third year, and the children started dying.
Now when the crops rot in the fields, when entire families are left without sustenance, those who have sufficient funds – or strength – take off. The rest die – or are reduced to menial servitude. In Sweden, family after family made their way down to Karlshamn and the waiting ships, hoping for a better life on the other side of the Atlantic. Years of seeing their harvest rot on the stalk, of too much rain, too little rain, had left them thin and hollow, sinewy people who had nothing left to lose.
Did they want to leave? To judge from letters, not really. Most of them left under duress, what future they’d had here wiped out by bad luck and rainy summers. Some left due to religious persecution – Sweden was very big on ensuring people conformed to the Swedish Lutheran Church, well into the late nineteenth Century. All of them left because they had to. All of them left family behind, people they would never see again, at most exchange an annual letter with. It was a painful severing of roots, ancient family structures rent apart. And still they went, clinging to the dream of better tomorrows.

The Swedish authorities were less than pleased. They needed the farmers to remain, yoked to their lands. Strong able-bodied men were needed in Sweden’s embryonic industries, they were the backbone of the agricultural system whereby farmers were obliged to work certain days for free on the fields of the rich landowners. The priests offered long and fiery sermons, attempting to dissuade their parishioners from leaving. God would be displeased, the priests said, God did not like it when the order of things was questioned. Sitting silent and hungry in their pews, the people listened. Some quailed and lost their nerve. Some became even more determined to leave, tired of tugging at their forelock whenever their betters rode by.
By the 1860s, almost all Swedish people could read. Mandatory school had been implemented in 1842 (for both boys and girls) most of the time at school spent learning the Bible, the glorious (and censored) history of Sweden and a dutiful approach to your elders and betters. No languages other than Swedish were taught. As a consequence, the people leaving for the beckoning shores of North America knew no English, would be incapable of communicating in their new home. Silent Swedish men became even more silent, nervous Swedish wives wondered how on earth they would survive. And still they went…
Immigrants gravitate towards landscapes that remind them of home. The Swedes were no exception, happy to disappear into the forests that covered large parts of present day Minnesota and Illinois. They were familiar with the hard work involved in clearing land, of uprooting tree stumps and shifting rocks. It suffices to study the landscape of Southern Sweden to realise just how much rock Swedish farmers had moved over the years.
These our forebears (well, not mine. Mine stayed put in northern Sweden, half-dead of starvation but so poor a ticket to the New World was an impossible dream) worked their butts off in their new homeland. No vacations for them, no matter the weather, but at least they were taming land with their name on it, building a better future for their children.

Hard work was never an issue for the Swedish immigrants. They bowed backs and shoulders, added more and more land to their holdings, and the letters back home spoke of endless fields, of land there for the taking. What was only a dream in Sweden could become a reality in America, and young Swedish men left by the boatload, eager to carve themselves a new life.
It is estimated close to a million Swedish people left Sweden during the last decades of the nineteenth century. Close to 25% of the population up and left – a veritable exodus – and by the end of the century Chicago was the second largest city in the world when it came to Swedish speakers. Over a couple of decades, Sweden was drained of people – mostly the ones visionary enough, determined enough to try again, elsewhere.

For many of them, their journey started because of a summer like this. Days of rain, of seeing the barley flattened in the fields, the potatoes rotting in the ground. Some despaired, fell to their knees and prayed for divine intervention. Others pulled themselves together, light eyes lost in the western horizon. A new life, a new home – right at the end of the rainbow.

14 thoughts on “The historic consequences of rainy summers”