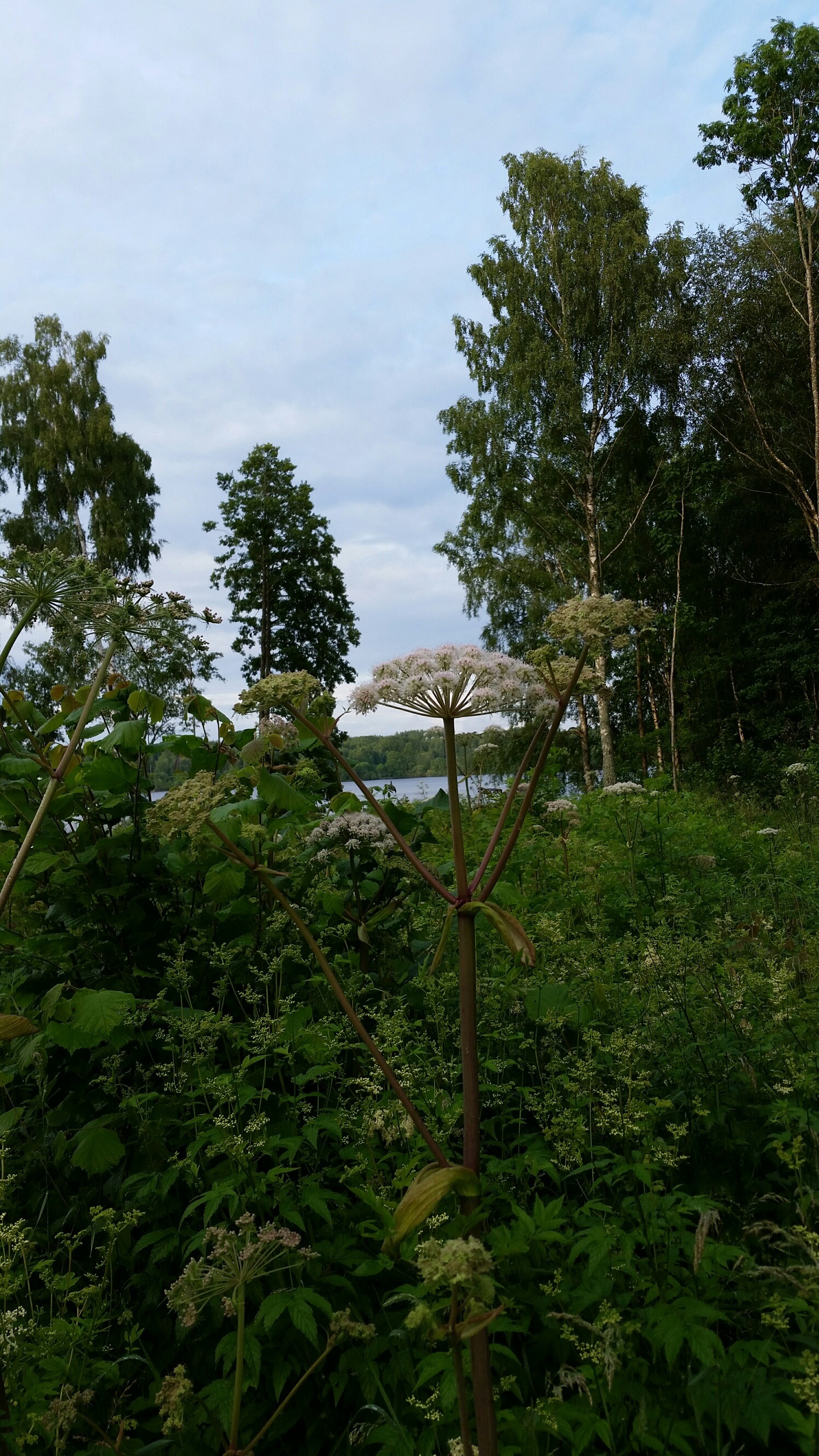 This time of the year, I spend a lot of time outside. Other than weeding my few flower beds and calling down eternal curses on those foolish monks who decided to introduce ground elder in Scandinavia (it’s edible – but it’s also wildly invasive) I rather enjoy studying the plants that grow on our meadow.
I love our meadow. Our sons were all for converting it into a football field, but I have adamantly refused, citing such things as plant variety in my defence. These days, my boys have resigned themselves – plus I suspect they’re pretty much in love with the beauty of the meadow, even if they don’t admit it. That’s guys for you…

Part of our land is borderline marshy, and at this time of the year this means a dipping sea of meadow sweet flowers, the plant itself standing well above my waist, the heavy cluster of miniature white flowers brushing my shoulders. Meadow sweet smells of almonds – or rather of newly baked almond cake. It is one of the more versatile medicinal plants around, can be used for everything from disinfecting open wounds to alleviating pain. In fact, meadow sweet is a natural source of aspirin, and in dire need one can dig up a piece of the root and eat it to bring that galloping headache back in control. My dear friend Nicholas Culpeper (well; that may be an exaggeration, seeing as Nicky boy has been dead these last three centuries past) has the following to say about meadow sweet:
“It is an excellent medicine in fevers attended with purgings, and may be given to the quantity of a moderate bason full, once in two or three hours. It is a good wound-herb, whether taken inwardly or externally applied. A water distilled from the flowers is good for inflammations of the eye.” Up here in Scandinavia, we also know this plant does wonders with acidic stomachs – and its roots are a natural source for black dye.
Second son, who is a fount of knowledge on everything from wormholes to Roman Emperors, would add that meadow sweet has also been used since time immemorial to clean out the vats prior to setting a new brew of beer or mead. Actually, the plant served dual purposes: first it was used to disinfect the vats, then it was added to the brew, an elegant little whiff of almonds accompanying the finished product. Seeing as second son has a major interest in brewing, this counts as a point in favour for our plant of the day.

These last few years, second son has been experimenting with various concoctions, all of them with the purpose of achieving an alcoholic beverage that is
a) cheap
b) potent
c) drinkable.
In this, he takes after his father, who drove me crazy with his youthful attempts to make something resembling wine from rose hips. When second son started talking about making sherry from carrots, I was therefore somewhat skeptical, and after two years of watching this potent brew bubble and darken I can report that carrot sherry fulfills two of the above. It also looks very nice, a deep golden brown colour that brings to mind high end whiskies. That’s the only resemblance it has with whisky, high-end or otherwise. On the other hand, compared to his father’s efforts he is one up: hubby barely achieved a) above with his hip concoction.
Second son, however, is not easily discouraged. Being of a scientific bend, he analyses the results, compares outcome with expectations, and sits down to consider just what in his brewing process he needs to tweak so as to achieve his goals. His friends cheer him on, no doubt very keen on the a) and b) part above. Seeing as his friends have downed sizeable quantities of that carrot sherry, we know for a fact they are less concerned by such aspects as taste. Anyway, I cheer second son on too, because his experiments expand beyond the realm of alcoholic beverages, and so it is second son who will surprise us with jars of homemade strawberry jam – or who fills the entire house with the delicious smell of baking bread.
Last year, second son developed a fascination with meadowsweet. Personally, I think he’d overdosed on Amaretto, which was why he hovered like a drunk bumblebee round the flowering almond-scented plants.
“A cordial,” he said, “wouldn’t that be wonderful?”
“Hmm,” I replied. A cordial? Yeah, right!
“A cordial,” he told his sister, “What do you think?”
“Hmm,” she said. “Stick with the elderflowers.”
He gave her a disappointed look. “People like you don’t drive evolution forward.”
Being the big sister, she just raised an eloquent brow.
Anyway, to make a long story short, second son made cordial. The kitchen smelled of almonds, the entire house smelled of almonds. The cordial smelled of almonds and was quite, quite undrinkable. As per second son, this was just a matter of not having set it to brew. With a hopeful look at me, he suggested mixing his cordial with more sugar and leaving it all to bubble along happily in a nice secluded corner of the country house. Did not happen.

This year, second son is back to hovering around the meadow sweet – in between crouching in front of one of our impressive stands of bog-myrtle and sighing happily. Bog-myrtle is an excellent flavouring in schnaps. Excellent. Once upon a time, it was mixed with yarrow and rosemary and used to flavour beer – before people caught on to hops. It is also a fantastic midge repellent, good for combating fevers, stomach aches, pulmonary infections and unwanted pregnancies. In fact, bog-myrtle is almost as useful as meadow sweet – but it is nowhere near as pretty.
Not that second son cares about such superficial things as beauty: no, second son inhales the scent of crushed bog-myrtle and turns to beam at me.
“Pretty much a miracle, huh?” he says, gesturing at the meadow sweet, at the bog-myrtle. “Two plants – weeds, almost – and they’re more or less a complete pharmacy.”
“Yup.” A miracle indeed. I hunker down beside him, and there we sit, two people with wide smiles on their faces as we inhale the scents of our magic meadow. It makes me think of Ferdinand the Bull – you know, the bull who preferred flowers to fighting.

3 thoughts on “The miracle plant – of medicines and alcohol”