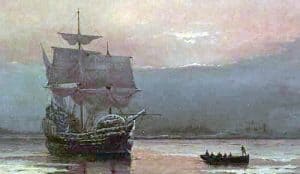 Many of the early settlers in the American Colonies emigrated due to religious issues. Interestingly enough, while the English government had little tolerance for Puritans, Quakers, Catholics, Presbyterians and what have you back home, they seemed not to have minded overmuch when these people settled in the faraway colonies – still English dominions, but at a sufficient distance to allow the heart to grow (somewhat) fonder. Or maybe this tolerance rather reflected the government’s interest in increasing their fiscal income. Or maybe it was as simple as “out of sight, out of mind”, because seriously, who in Bristol or York would be all that bothered by what happened on the other side of the world?

The young colonies were no more tolerant than England – but with different religious preferences. Virginia quickly became an Anglican stronghold, further reinforced during Sir William Berkley’s long tenure as governor. Massachusetts was firmly in Puritan hands – strong, capable and somewhat sombre hands – a few colonies didn’t care one way or the other, and then there was Maryland, where for the first time in history an Act of Toleration was implemented in 1649. (The fledging Rhode Island passed a series of laws in the 1630’s that protected religious freedoms, but nothing as explicit as Maryland’s Act.)

Let us take a step back, and consider just how turbulent the 17th century was from a religious perspective. The Reformation movements of the 16 th century spilled over into the new century, and with the Protestant view that man was fully capable of reading the Bible and understanding it all on his own, the door was opened wide on multiple interpretations, resulting in a plethora of Protestant orientations, all of them with their own distinctive set of beliefs. At one end of the spectrum was Calvin and the Presbyterian school of thought, at the other the far more moderate (lax in the eyes of the more rabid reformers) Church of England.

Ultimately, the unrest of the 17th century was never about faith as such; it was about power. The Thirty Years’ War was clad in the guise of defending the faith, but was about expanding the power base and wealth of certain states (such as Sweden) while curtailing that of others, notably the Hapsburg Empire. How else to explain the interesting fact that Catholic France bankrolled a substantial part of Protestant Sweden’s war efforts?

Inconsistency was rife: on one hand, France allied itself with Sweden, on the other it viciously oppressed the Huguenots, this culminating in the Huguenot revolts and the Anglo-French War. England had to retreat from the war due to Charles I’s increasing problems at home (he had his own vociferous religious protesters), leaving France’s Protestants to their fate.

In England, the Church of England – and the government – was distrustful of all religious faiths outside the Anglican Church. Catholics were hounded, would continue to be hounded for decades. Puritans were seen as dangerous dissenters and were forced to flee in large numbers, first to the welcoming Dutch States, eventually to Massachusetts. When the situation for Catholics (or ‘recusants’) became intolerable, many of them opted to go overseas as well, and fortunately for these papists there was a small colony in America that opened them with open arms, namely Maryland.

Maryland at the time was a private possession. It was owned by Cecilius Calvert, a Catholic peer, and as such it welcomed Catholic immigrants with open arms. Actually, the colony welcomed immigrants of any Christian denomination with open arms, and as a consequence the colony’s population very quickly came to be dominated by Puritans.

Calvert was set on creating some sort of safe haven for his co-religionists, and he quickly concluded that persecution of non-Catholics was not the right way to go about it – after all, Maryland was the colony of a Protestant country. Besides, Calvert seems to have been a wise man, who urged all his colonists to set their religious rivalries aside and concentrate on building a prosperous new country – which of course benefited Calvert financially.

Maybe those early colonists were tired of strife. Maybe Calvert’s urgings had them rubbing along equably. Already in 1639, the colony passed an ordinance that had a generally word comment as to the rights of man, but when the English Civil War broke out, the underlying religious differences surged to the surface, and for a couple of years Maryland was under Protestant dominion before the Calvert family regained  control. Worried by the violence that had erupted in his colony, Lord Calvert drafted an Act of Toleration, not only to protect the Catholics but also to assure the recent Puritan colonists in Providence (Annapolis) that they would have freedom of worship.

The Act of Toleration is in many ways a precursor to the First Amendment in the American Constitution. In a world full of religious strife, it was an innovative attempt to heal rather than breach. In many ways it was imperfect, granting freedom of worship only to Trinitarian Christians. To deny the divinity of Jesus Christ could lead to execution, thereby closing the gate in the face of Unitarians and Jews. The colony’s Puritans chafed under some of the wordings, made uncomfortable by accepting a law drafted by a Catholic. (To them, swearing fealty to Calvert was to indirectly swear fealty to the Pope, who according to Puritan tenets was anti-Christ. Interestingly enough, those early Puritans found a way of accommodating this conundrum within their conscience)

What is of particular interest in Calvert’s Act is that it contains the first attempts to curtail hate speech. As per the Act of Toleration, the word “heretic” and religious insults in general were forbidden. Well before the rest of the world woke up to the need to reinstate civility in religious discourse, Calvert attempted to draw up a framework of rules that would force people of different convictions to treat each other with respect.

In 1654, the Act of Toleration was repealed. Two years earlier, Calvert’s government had been overthrown, the colony seized by Protestant forces loyal to the new Parliamentarian Government in England. The Puritans went on a spree once the Act was repealed. Catholic churches were burnt, Catholics were persecuted and forbidden to practise their religion. All in all, not at all a godly behaviour…

Fortunately, Calvert regained control, and in 1658 the Act was once again passed by the colonial assembly. This time, it would survive until 1692, when the Maryland Puritan Protestants overthrew Calvert’s rule yet again. And this time, the Act was permanently abolished, Catholicism was banned and the Church of England became the colony’s official church in 1702 – something that can’t have pleased the Maryland Puritans all that much.

Not until the American Revolution would freedom of worship be reinstated in Maryland, but when the Founding Fathers of the United States drew up their documents, they clearly found some inspiration Maryland’s Toleration Act. I think Lord Calvert would have been pleased.