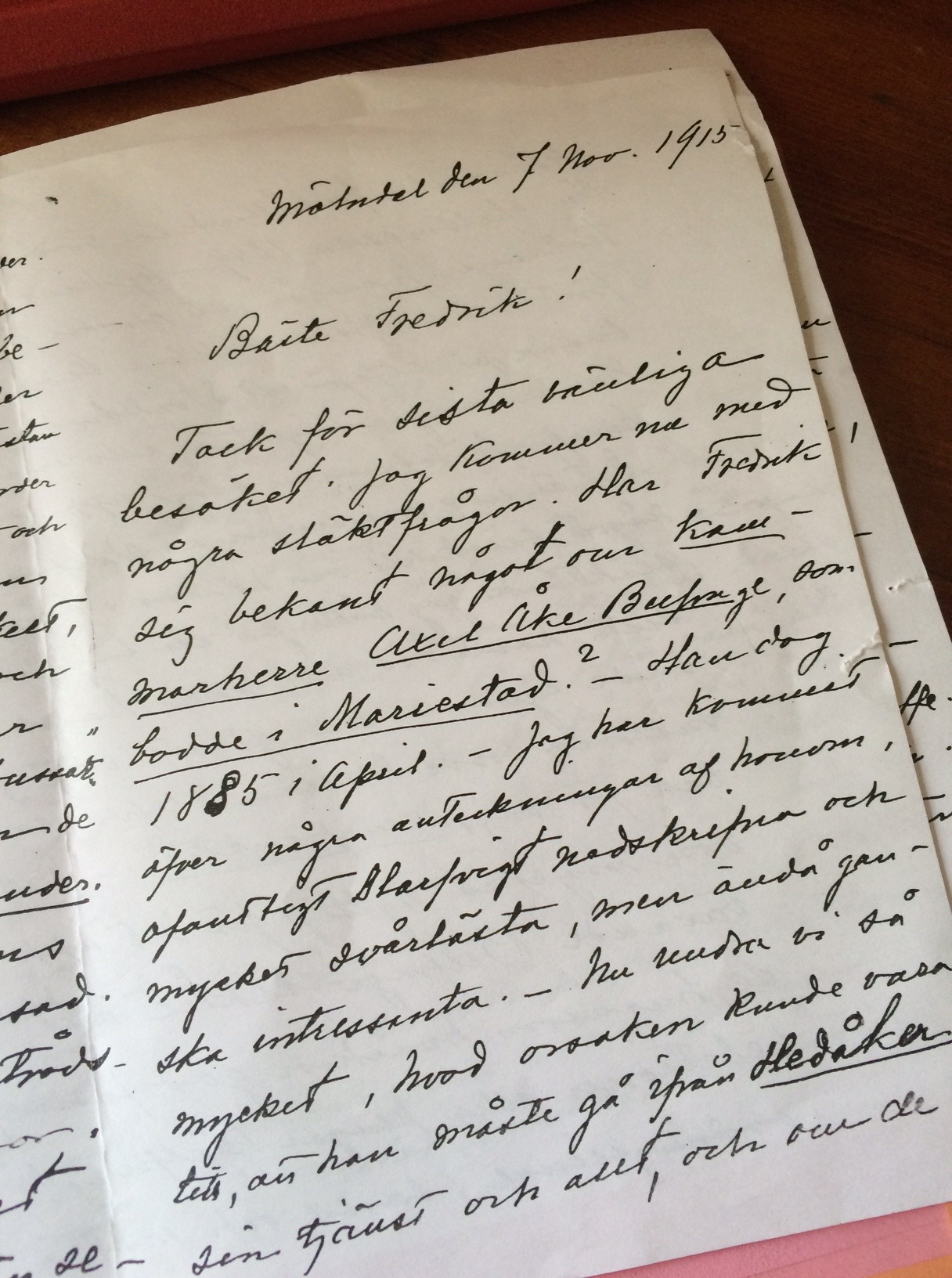 We found a letter in an old storage box. The old, hand-written type, with the odd little splotch of ink. The letter writer was accustomed to writing in longhand, made evident by the consistency of the writing over the six pages, and now and then she underlined certain words so as to really get her point across. It is dated November of 1915 – almost a hundred years ago. She was writing in Sweden, to a person in Sweden, and the first few pages are gossipy, with her obsequiously asking for his help in finding some information. You see, the lady was writing a book – about his family. So she started by sharing a little anecdote about a good-for-nothing relative – thankfully dead since some thirty years – who lost home, fortune and marriage. This, says our writer, would be an excellent example of how worthless such things as breeding, contacts and money are if there is a lack of common sense and structure. True then, true now.
Further in, our writer expanded her chest to boast about her son, her brave soldier Carl. I stopped reading, trawling through my mind to see if I could recall any Swedish involvement in World War I. Nope. It transpires our young hero Carl was fighting for the Germans, as per his proud mother “he fights like a man, honouring his family and his country”. What struck me is how dispassionately our writer went on to detail her son’s adventures. He was somewhere on the Western Front – and here I yet again had to take a break, thinking of that unforgettable book, All is Quiet on the Western Front by E M Remarque. Except, of course, that it was never quiet on the front – not unless you’d died and gone to heaven.

Carl was too young to be fazed by the ongoing war – or maybe he was determinedly cheerful when writing home. “It’s all rather easy,” he said “it’s either win or die.” And Carl, so far, was on the winning side. Proud Mama described a recent situation in which Carl had been forced to step forward and take command, seeing as all communication with his commanding officer was down: his men had been shelled for two days straight, the trenches were filled with mud and gore, and the defences they’d put up had been reduced to rubble, and yet they refused to give up, defending their trench until other German troops could come and relieve them. “I was simply doing my duty,” Carl wrote to his mother, “as would any other man of honour.”
Mama went on to tell the recipient of her letter that for his valour, her Carl had received the Iron Cross. Pride leaked through in every pen stroke… The writer added a number of further anecdotes from her son, this as she knew the recipient would understand just what a parent felt when reading about a son’s bravery on the field. “After all, you also have a son in the army,” she wrote, and I realised she was referring to my husband’s grandfather, who spent his entire life as a professional officer, but never saw any real action. The unfortunate man died of a severe attack of gall stones a decade or so after WWI.
Carl, however, lived right on the edge. Life at the Western Front was a sequence of days in the trenches, the constant artillery fire becoming no more than a backdrop of distant noise against which the whistling bullets, the odd scream and suppressed gasp stood in stark contrast. Even when they were granted a few days of rest, the noise continued unabated, Carl explained, but it didn’t matter, because the moment they were out of the trenches, he and his men collapsed to sleep, exhausted after days in the mud and the cold. “It’s no big thing,” he’d written to his mother, “to take over an enemy trench once it has been bombed to pieces. It’s just a matter of running like a hare over the twenty metres that separate us from them.” Twenty metres – easy throwing distance with a tennisball…

I wonder if he ever told his mother the truth. Did he ever share the horrors of mud and cold, of living off cold coffee and dried lard? Did he tell her how the shelling never stopped, an incessant carpet of background sound, day after day, night after night? Did he describe the consequences of dysentery, or the constant fear of gas? Did he share his fear of dying, no matter how gloriously? I think not. It would have been a sign of weakness, and no true warrior of the times would burden the gentler sex with the harrowing details of war, this most manly of pursuits.
Carl went on to be awarded a second Iron Cross, this time first class. He was hailed as a hero, a young man standing side by side with our German brethren. A true paragon, a representative of all that is good and noble – except by the time the war ended, he probably didn’t believe in good and noble. War does that to you – it sort of knocks all those concepts of glory on the head. Even worse, by the time the war ended, Carl was on the losing side, the German Empire reduced to rubble, the hitherto so proud German army severely decimated.
In Sweden, sentiments would remain pro-German for some more decades. After all, the cultural ties between Sweden and Germany were strong, the well-educated spoke German as their second language, and many were the Swedes who studied in Germany, bringing back German values. When the consequences of the harsh and humiliating peace accord in Versailles finally exploded into the Second World War, most Swedes were still rooting for the Germans, even if the more intellectual among us had started questioning certain aspects of Hitler’s policies. Even in the Second World War, many hundreds of young Swedish men fought with our German brethren, no doubt wanting to honour their family and their country.

Here and there in the letter, the motherly concern leaked through. Like when she admitted to having spent multiple hours trying to work out just where on the Western Front her Carl might be fighting – and no matter that she described her conclusion as being “something of a hot spot, a chance for further glory”, it is apparent she is worried. Like all mothers, she wanted her son home in one piece.
Carl did come home. Whether in one piece yes or no, I don’t know. All I do know is that he never married, he never had children, seemingly living an increasingly reclusive life before he died in 1950. By then, it had become unwise to admit to having fought on the German side – whether in the First or Second World War. By then, the Germans had been permanently tainted by the atrocities committed in their name by a madman and his cronies during the Second World War. The two Iron Crosses probably rattled unseen in a little box, Carl’s moments of heroism reduced to collaboration with the powers of evil.
The Germans in the First World War were no more evil than the English or the French or anyone else. This massacre of an entire generation of young men was the consequence of ancient conflicts and modern politics merging into an explosive mix. Both sides committed atrocities, neither side was blameless, and ultimately this bloody conflict which cost more than 16 million people their lives, resolved nothing. Twenty years later, the bubbling resentment engendered by WW1 would erupt into WW2, and an inconceivable 85 million lives would be lost to that deadliest of human pursuits: war.
We found a letter – a little glimpse into life as it was one hundred years ago. The letter writer published her book – and I have a copy of it – her son came home, and for a while things returned to being almost like they’d been before the war. Almost. Conflicts on that scale don’t only scar the individuals that participated – it shakes the foundation of the world. At the beginning of World War 1, the German Empire, the Hapsburg Empire, the Russian Empire and the Ottoman Empire still existed. By its end, they were all gone. Not that our letter writer cared all that much about the larger political picture: she just wanted her “warrior hero” to be safe.

6 thoughts on “His mother's hero – of an old letter”