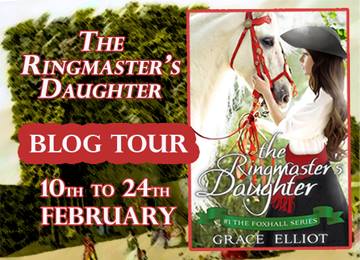 When I was a child, I dreamt of becoming either a medieval knight or a veterinary. One dream fell flat on its face due to having been born in the wrong time and of the wrong gender, the other burst apart when I realised I faint at the sight of blood. Not a good thing if you’re a vet, I would imagine….

But today I have the pleasure of welcoming the real-life vet AND successful author, Grace Elliot to my blog. She has recently released a new book, The Ringmaster’s daughter, and I can assure you animals play an important role in it – as does romance. Unbeatable combo, that…True to her profession, Grace offers us a post about the rather barbaric practice of setting animals on animals that was so popular in previous centuries. So, without more ado, I give you Grace Elliot

Just because something is popular doesn’t mean it’s in good taste and when it comes to entertainment what appeals to one person can be repulsive to another. This is certainly true of the 18th century craze for animal baiting, which from the distance of the modern day most right-minded people find disgusting. 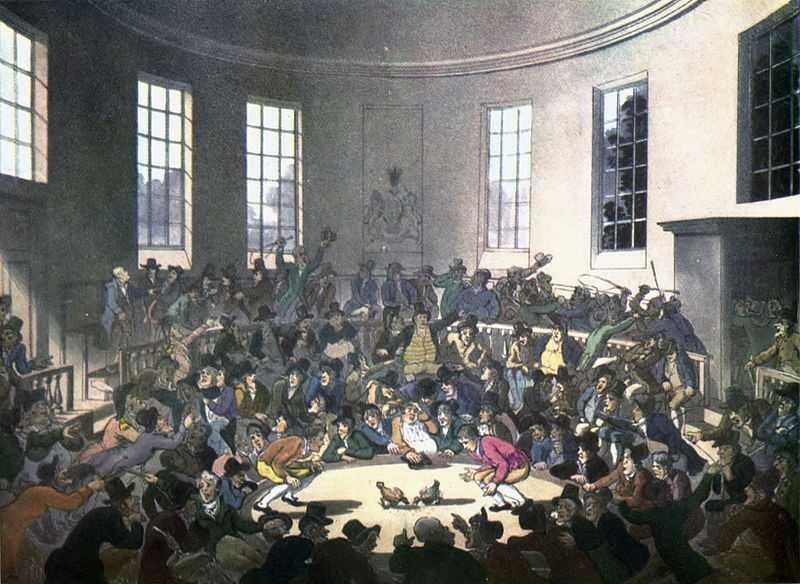 Baiting involved forcing animals or birds, to fight one another, often to the death. The most ancient form was cockfighting which has also been suggested as one of the world’s oldest spectator sports, going back over 6,000 years to ancient Persia. Roman mosaics exist that show two cocks squaring up for a winner’s purse. In 17th century Britain the ‘sport’ was so popular and widespread that the term ‘cockpit’ (the pit in which cocks fought) was in common parlance to mean a place of entertainment or frenzied activity and in Tudor times, Whitehall had its own permanent fighting arena – the Cockpit-in-Court.

Cocks were pitched against each other because of their natural aggression to other males and James Boswell noted in 1762 after attending a fight how the birds fought with ‘amazing bitterness and resolution’ to the end. It took until 1835 for cock-fighting to be banned but the legislation did not have sufficient ‘teeth’ and amazingly the activity continued in a widespread manner until the 1911 Protection of Animals Act made it illegal to prepare a place for cock-fighting. (Anna’s comment: Sadly, cock-fighting is still alive and well in other parts of the world)

The bear was another animal used for baiting and the ‘sport’s’ exponents included King Henry VIII, who had a special bear pit constructed at Whitehall, as well as Queen Elizabeth I. Tudor attitudes were very different to the modern day when such cruelty is to be abhorred, indeed Elizabeth even over-ruled Parliament when they tried to stop bear-baiting taking place on Sundays. Elizabeth’s court favourite, Robert Dudley, Earl of Leceister, regular hosted bear baitings, one of which is described below by Robert Laneham (1575). 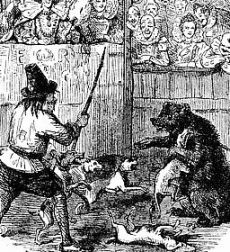 “Thursday, the fourteenth of July, and the sixth day of her Majesty’s coming, a great sort of bandogs [mastiff] were then tied in the outer court and thirteen bears in the inner . . . It was a sport very pleasant, of these beasts, to see the bear with his pink eyes leering after his enemies approach, the nimbleness and wayt [wait] of the dog to take his advantage, and the force and experience of the bear again to avoid the assaults. If he were bitten in one place, how he would pinch in another to get free, that if he were taken once, then what shift, with biting, with clawing, with roaring, tossing and tumbling, he would work to wind himself free from them. And when he was loose, to shake his ears twice or thrice with the blood and the slather about his physiognomy, was a matter of goodly relief.”

Incredibly, this cruel activity only started to die out, in the 18th century, because bears which were extinct in Britain, also became rare in Europe and therefore too costly to import. 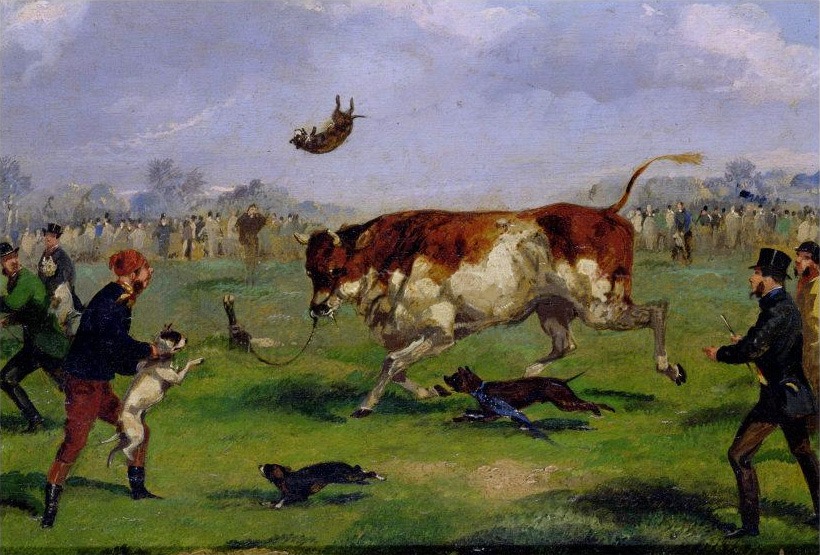 Another example is bull-baiting. The bull was tied to a stake on a tether with a 30 foot radius. The idea of the ‘sport’ was for dogs to immobilize the bull. This was part justified on the rather thin belief that baiting improved bull meat. Indeed, some towns had bye-laws stating meat from a bull could not be sold unless the animal first been baited. In the early 19th century social attitudes began to change, but when the topic of banning bull-baiting was debated in parliament, the future prime minister Sir William Pulteney argued that:
‘The amusement inspired courage and produced a nobleness of sentiment and elevation of mind.’
An example of the wide spread nature of bull-baiting is found in the name of the main commercial area of the city of Birmingham, UK – which is called the Bull Ring (or Bullring in the modern day). The ‘ring’ refers to the hoop of iron to which the bull was tethered for baiting prior to slaughter. [It is perhaps testament to the British love of tradition that the 21st century contraction of Bull Ring to Bullring caused anger amongst the locals who looked on the former as the true, historic spelling.] 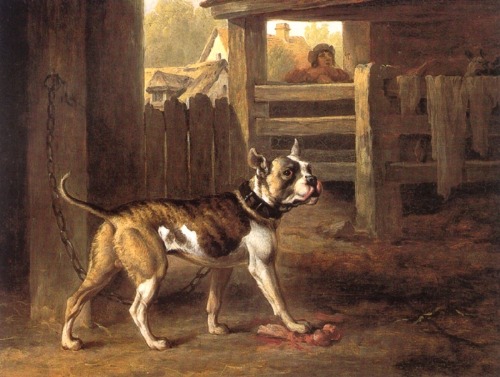 And finally…the dogs used in the vile activity of bull baiting were bred for purpose and when bull-baiting was banned, the numbers of these dogs fell dramatically. Around 1865 dog fanciers worried about the breed going into decline set about breeding the remaining animals together so as to preserve the breed. It is from these dogs that the British bulldog was derived – that national symbol of determination and fighting spirit! 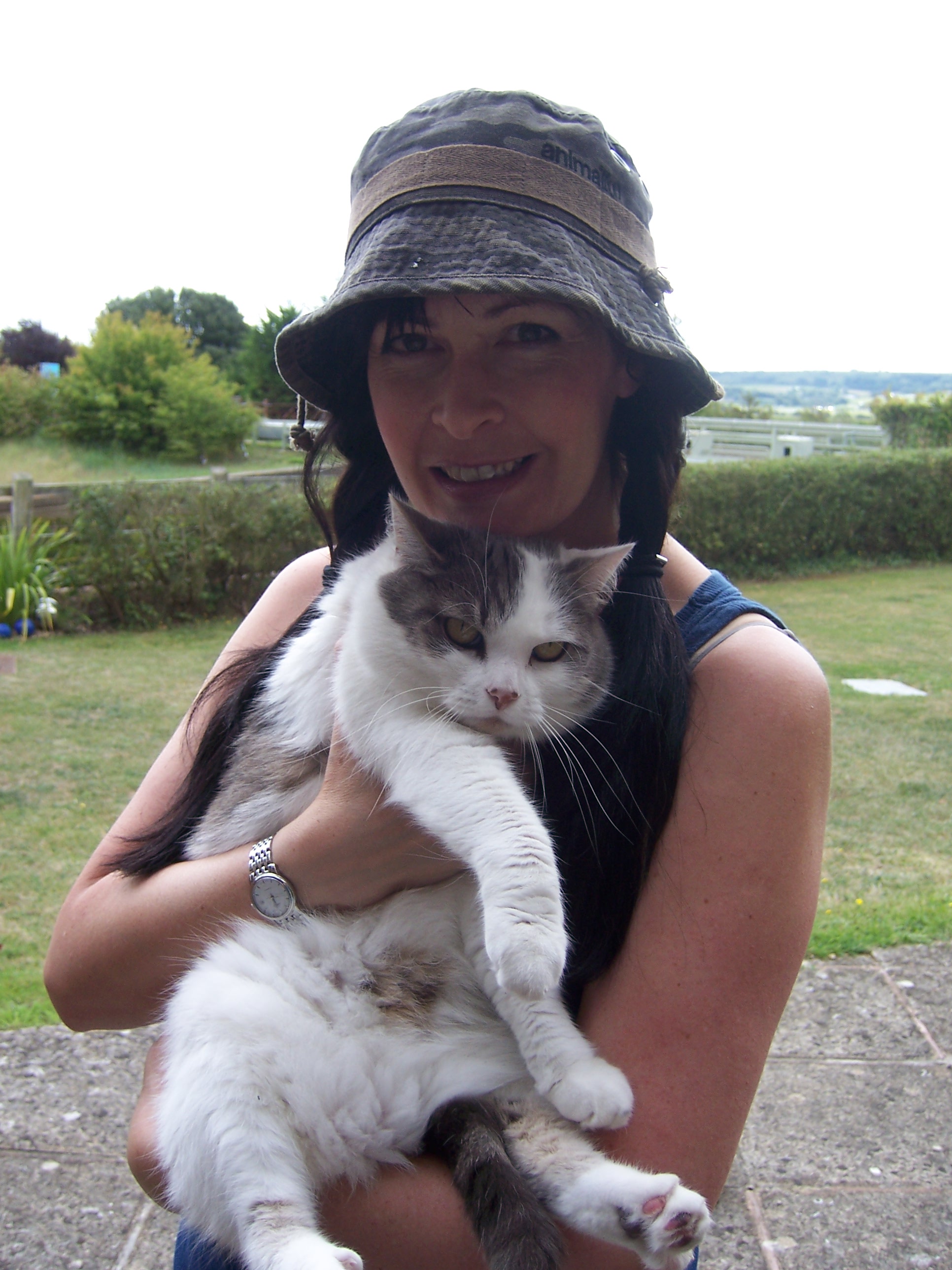 Grace Elliot leads a double life as a veterinarian by day and author of historical romance by night. Grace lives near London and is housekeeping staff to five cats, two teenage sons, one husband and a bearded dragon.

Grace believes that everyone needs romance in their lives as an antidote to the modern world. The Ringmaster’s Daughter is Grace’s fifth novel, and the first in a new series of Georgian romances. 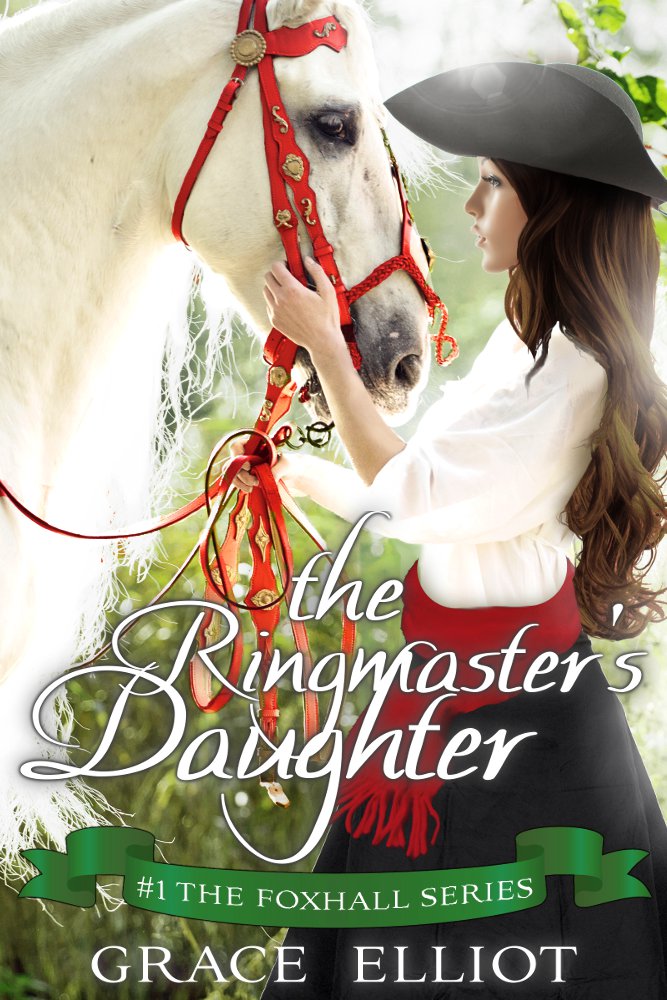 The ringmaster’s daughter, Henrietta Hart, was born and raised around the stables of Foxhall  Gardens. Now her father is gravely ill, and their livelihood in danger. The Harts’ only hope is to convince Foxhall’s new manager, Mr Wolfson, to let Hetty wield the ringmaster’s whip. Hetty finds herself drawn to the arrogant Wolfson but, despite their mutual attraction, he gives her an ultimatum: entertain as never before – or leave Foxhall.

When the winsome Hetty defies society and performs in breeches, Wolfson’s stony heart is in danger. Loath as he is to admit it, Hetty has a way with horses…and men. Her audacity and determination awaken emotions long since suppressed.

But Hetty’s success in the ring threatens her future when she attracts the eye of the lascivious Lord Fordyce. The duke is determined, by fair means or foul, to possess Hetty as his mistress – and, as Wolfson’s feelings for Henrietta grow, disaster looms.

Want to see more of Grace?