In my recent post about St Birgitta, I mentioned in passing the Swedish queen, Blanka. According to Birgitta, this French sissy had none of the spiritual backbone required of a queen, and besides, she was French…

As for Blanka, I suspect St Birgitta was not on her Top Ten most favourite people list – especially after the future saint accused the queen of adultery, going so fas as to insinuate that Blanka’s eldest son, Erik, was a cuckoo in the royal nest. 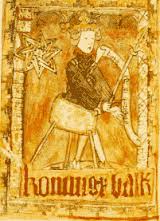 Blanka was born in Namur, in present day Belgium. Her father was a count, life was probably good and comfortably civilised. What the poor girl must have thought when the dashing young king of Sweden popped by to ask for her hand is unknown. Why the dashing young king, Magnus Ericsson, decided to take a jaunt all the way down to Namur for his bride is also unknown. Had someone sent him a picture via dove? Was the young woman so beautiful as to have her name spread far and wide? Well, we will never know, but for some reason the young king had set his heart on the teenaged girl, and at the tender age of fifteen or thereabouts Blanka was betrothed to him in Namur, arriving in Sweden in 1335 there to be properly wed and installed as queen.

The cultural shock must have been enormous. From well-organised feudal societies, with castles and manors surrounded by well-tended lands, to a country in the making – a country that, BTW, never did the feudal thing, having more than its fair share of vociferous yeomen farmers who had no intention of kow-towing to some poncy noble or other. Swedish yeomanry paid their taxes and did their military service when required (even if they were most inventive in trying to find excuses not to) but considered themselves in all other matters to be on par with the nobles, far above the sorry tenant farmers.

Neither here nor there, but where Blanka was accustomed to a life of afluence, a life where now and then a pomegranate or an orange could end up on her plate, Sweden rarely saw much of anything as frivoulus (and potentially sinful) as a pomegranate.Blanka did her duty as a wife, presenting her husband with two healthy sons, Erik and Håkan, and a number of daughters. Sadly, all the daughters died young. The sons, however, prospered until the eldest succumbed to the plague, and then there was the unfortunate issue with Håkan’s rebellion against his father. By then, Blanka was dead, having died in her early forties. Why we don’t know, just as we don’t know where she is buried.

In actual fact we know very little about Blanka – except for the persisting rumours that she was very beautiful. Today, all Swedish children have heard of Blanka, not because she was our queen, but because there’s a nursery rhyme in which her name is mentioned. “Rida, rida, ranka, hästen heter Blanka” which VERY roughly translates to “Ride, ride fast, your horse’s name is Blanka”, this said while you balance the child in your leg and move it up and down as if it were a trotting horse.

The nursery rhyme is actually a song, a rather sad song where the rhyme recurrs in the chorus, but where Blanka fears the day when her little prince will reach manhood, having then to deal with sorrows that she, as his mother, will not be able to help him carry.I guess all mothers, throughout the ages, have had similar concerns. Whether a prince or a peasant, one day your baby will have to face the world alone, without his mother by your side. Scary thought – at least for a mother.

4 thoughts on “Made immortal by a nursery rhyme”