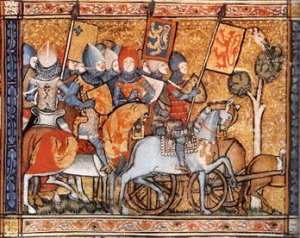 My husband’s family has a coat of arms. His family goes back for yonks, and he can count both the Stuarts of Scotland and the Vasas of Sweden among his ancestors. Not sure the Vasa strain is all that much to brag about, given that his family is related to Erik XIV of Sweden, a king with serious mental issues (see more here) By now, all this royal blood has of course been severely diluted, and due to his family’s slide from well-to-do peerage to insignificant peerage, it isn’t as he has any material benefits due to his old and most illustrous name. (And yes, a number of his ancestors have been illustrous, brave officers in the royal Swedish armies) But he does have that coat of arms. I don’t have one.
My family is obviously as old as his is, but as I am descended from tenant farmers and miners on my father’s side and somewhat more well-to-do farmers on my mother’s side, these preceding generations haven’t left much of a trace except for the standard notations in the church ledgers, whereby one can glean birth, confirmation, marriage, children and death. An eternal cycle, one generation seguing into the other with very little fuss.
Back to the coat of arms. Now, when someone tells me they have a coat of arms, I imagine something colourful with a rampant heraldic beast on it. A lion, an eagle, a griffin, maybe a leopard or a unicorn. Even a horse will do. Or a stag, a dragon, a wolf… My husband has beavers. Beavers, I tell you. Three in total, their brown heads silhouetted against a silver background. (Strangely enough, one doesn’t see their teeth as much as one sees their whiskers) 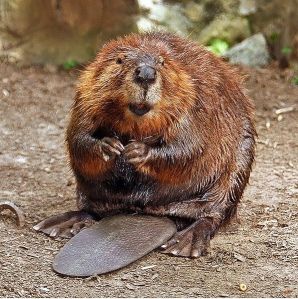 Don’t get me wrong. I like beavers – well, theoretically, seeing as I’ve never met one face to face so to say. But having read the Narnia books over and over again, I am sure beavers in general are honourable and brave – if somewhat stodgy. The beaver is also to some extent an apt animal for a nobleman to have as his badge. After all, beavers don’t live in lairs or messy nests, beavers live in lodges. How fancy does that sound, huh? All the same, beavers on a coat of arms make me smile rather than gape in awe.

First of all, I am very confused by the presence of beavers from a geographical perspective. Were there beavers in Scotland back then in the 14th century? Umm, says my husband, going on to mutter something about his family having even more ancient roots in Flanders, and maybe that’s where they had the beavers. Sounds plausible. 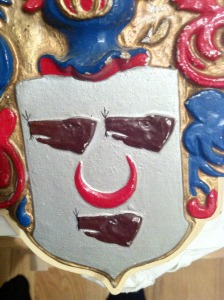 Secondly, I’m not quite sure what values the beaver represents. Brave like a lion, deadly like a dragon, fast like a horse, proud like an eagle and ????? like a beaver. The only word I come up with is industrious, and now that I think about it, that’s not a bad characteristic, is it? Besides, it definitely fits my husband, who is incapable of sitting and relaxing when he could instead be chopping wood, or repairing stone walls, or cutting back the saplings, or harvesting late raspberries, or… You get the picture, I presume.

The beavers on my husband’s coat of arms have half open mouths, as if they’re about to bite someone. Maybe these are very ferocious & martial beavers, fully capable of holding their own in a pitched battle. If nothing else, they can scurry among the horses’ legs and bite them – or chew off the Achilles tendon of the men-at-arms.

Finally, I wonder how the person first awarded with his coat of arms reacted.
“And you, Sir Robert, you get… beavers!”
“Beavers?” (Sir Robert goes puce) “Why beavers, my lord?”
“All the other animals were taken – well, except for the eels. You want eels instead?”
Hmm. Given that choice, maybe Sir Robert’s decision to stay with the beavers is understandable. Anyway, to cheer Sir Robert up, he was also given a crescent moon with which to decorate his heraldic banner. Like a curved scimitar, the blood red moon promises dire death to whoever impugnes the family’s honour. Which is why I generally don’t mention the beavers 😉