“If I had two heads, I would gladly give him one,” Christina of Denmark is supposed to have quipped, when Henry VIII was proposed as a future bridegroom. This particular young woman had no desire to end up as one of the English king’s discarded wives – especially not as so many of them ended up dead.
Whatever Christina’s opinion in the matter, Hans Holbein was dispatched to do her portrait so that Henry could peruse her likeness. It is said Henry was quite taken by little Christina – as was most of Europe, Christina was considered quite the beauty. Fortunately for Christina, her uncle, the powerful Hapsburg Emperor Charles V, was not all that keen on the match. After all, he already had one female relative who had suffered at Henry’s hands – Katherine of Aragon. (Not that he expended all that much effort in trying to help his aunt)

Christina was the daughter of Isabella of Austria and Christian II of Denmark – a man who led a rather turbulent life. Isabella was sister to Charles V, and had been raised in the Netherlands, at the sophisticated and international court of her paternal aunt Margaret of Austria. While her sisters were sent off to Hungary and Portugal, lucky Isabella ended up destined for Denmark – which to her must have been the equivalent of an exile into the frozen wilds. I don’t think Isabel was all that thrilled with her match (even if she was quite taken with her prospective bridegroom), but being a princess came with obligations, first and foremost that of marrying whomever her family wanted her to marry. The value of this particular alliance went down the drain when Christian was deposed in 1523, and so Isabel was suddenly relegated to the not so desirable position of ex-queen.

However, her husband being deposed carried the benefit of allowing Isabella to leave Denmark and return to her native Netherlands, there to raise her children. Except that Isabella died a couple of years later, leaving her three surviving children motherless and in the care of their father. The Holy Roman Emperor was less than pleased with this state of affairs. Christian II of Denmark was dabbling in heresy, what with his leanings towards Lutheranism, and so Charles V decided to take the children from him, turning them over into the capable hands of his sister, the dowager queen Mary of Hungary. Christian was not in a position to protest. He needed Charles’ support if he was to reclaim his throne, and once he had bettered his ways and returned to the folds of the Catholic church, Charles V sent him off to Scandinavia, wishing him the best of luck. Unfortunately, Christian ended up a prisoner of his cousin, the new Danish king Fredrik I, and lived out the remainder of his life in captivity.

All of this meant Christina spent most of her childhood motherless and fatherless. As she grew older, Christina developed into quite the beauty – and her Hapsburg blood made her an attractive prize on the marriage market. After considering his choices, Charles V married her off to Francesco Sforza, Duke of Milan, a man 26 years her senior. Obediently, little Christina, at the time only twelve, married the duke, but two years later Sforza was dead and Christina was sent back to the Netherlands, there to kick her heels while a new marriage was arranged for her. Which is when Henry VIII, recently widowed, set his beady eye on her.

Had Charles V decided there was an advantage in securing a match with Henry VIII – and no doubt there were moments when he considered this, given his constant feud with Francis of France. Henry VIII could therefore be a valuable ally – Christina would have been dispatched to England, no matter that only one head graced her neck. And had Charles V decided to do so, Christina would have had no choice but to make the best of things, a bit like poor Anna of Cleves had to do. Christina being Christina, I think she would have had a fair chance of succeeding in her role as English queen, but I imagine the young woman nearly fainted with relief when she heard the match was off. Henry VIII had a reputation viler than Bluebeard’s among the royal houses of Europe at the time, and then there was the matter of his breach with Rome, a most serious matter for a member of the Hapsburg family.

Instead, Christina was married to Francis, the future Duke of Lorraine. It was a fruitful marriage – three children in four years after which Francis died, leaving Christina as regent of Lorraine. This was a position Christina was fully capable of filling. Since childhood she’d been surrounded by strong women who did the ruling on behalf of their brothers or nephews or sons, and she took to her new political role with gusto – so much, in fact, that the French king invaded the duchy in 1552, took her son husband and forced Christina to flee back to the Netherlands and the welcoming arms of her aging aunt, the dowager queen Mary of Hungary.

At the age of thirty plus, Christina had developed a taste for power, and so when Mary died, she put in a bid for the regency of the Netherlands, attempting to strong-arm her cousin, Margaret of Parma, out of the running. Didn’t work very well – Margaret was the illegitimate daughter of Charles V and ended up the winner. These two women were of an age, both well-educated, both of them multilingual – and both of them perceived as extremely capable by their male relations. As a consolation prize, Christina was given the opportunity to return to Lorraine, there to support her released son, and then, of course, there was Denmark.

Christina had been a toddler when her family was forced to flee Denmark. She had no personal ties to the country, no fond childhood memories, no Danish friends. This was, as per Christina,  irrelevant. Through her veins coursed the blood of the Oldenburgs, and upon Christian II’s death in 1559, Christina brought forward her claim to the combined Danish, Norwegian and Swedish throne, conveniently ignoring that Sweden had its own king and that her cousin was firmly entrenched on the Danish throne. Details, schmetails, in Christina’s opinion – and she somehow seems to have decided to overlook that she had an older sister with an even stronger claim. (Except that Dorotea could count with zero support from the Hapsburgs, what with her husband embracing the Protestant reformation)

Christina didn’t just claim the throne: she worked actively to win it, supporting various endeavours to overthrow her second cousing, Fredrik II. All of them failed – it was probably difficult to raise popular support for a claimant who had last trod Danish soil as an infant. Not being one to give up easily, Christina then tried to reinstate her family in Denmark by marrying her daughter, Renata, to Fredrik II. That didn’t work either – maybe Fredrik was disinclined to marry the daughter of a woman who’d tried to actively dethrone him. Whatever the case, I think Renata was lucky not to marry him: Fredrik was an impetuous, hot-headed man with a fondness for wine – too much wine – and war.

Once Christina realised Fredrik had no intention of considering a marriage with her precious Renata, Christina attempted to marry her daughter to Erix XIV of Sweden. For whatever reason, that alliance didn’t happen either – luckily for Renata, as Erik had mental issues and would end up deposed and imprisoned (for my post about Erik, go here).  After a number of years and frustrations, Christina gave up on her hopes to become ruling queen of Denmark. Instead, she retired to Italy, where she died in 1590. 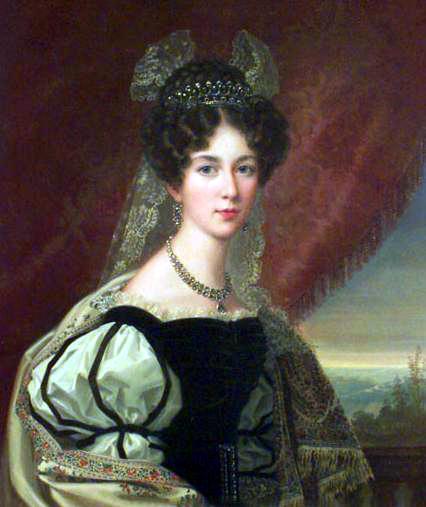 Several centuries later, Christina’s claim to the Scandinavian thrones would to some extent come to fruition. In May of 1823,  Josephine of Leuchtenberg married Oscar Bernadotte, the Swedish Crown Prince. Josephine was a descendant of Renata of Lorraine, and when her eldest son, Charles XV, ascended the Swedish throne in 1859, there were at least some drops of Christina’s blood coursing through his veins. I’m not sure Christina was in a position to care by then, but if she was, I’m sure she’d be doing cartwheels of joy. Or maybe not. Christina does not seem the type to do cartwheels. Instead, she would duck her head and smile enigmatically.

Today, the Danish, Swedish and Norwegian royal families are all descended from Josephine, and therefore from Christina, a woman who badly wanted a crown, but not sufficiently to risk her single, precious head.