Except of course, that beauty is generally quite subjective isn’t it? Where some go “oooh” and “aaah” while gaping at the Grand Canyon, others may be quite unmoved – or battling vertigo. Beauty in human beings is not only subjective, it is also fashion driven, so that what might be the hottest of looks in one age is simply not cool a few decades further down the line.

In the fifteenth century, high foreheads were in, and women plucked their hairline and eyebrows to create a domed forehead that went all the way up to their headwear. To us, the serious ladies that gaze down at us from Flemish paintings of the times look somewhat … eh, exaggerated? 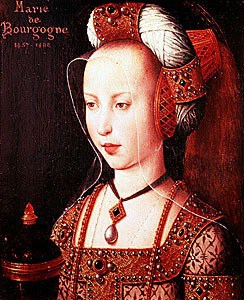 Mary of Burgundy. Behold the long dome of her plucked forehead.

However, to judge from portraits might be a tad dangerous. One might end up with the impression that England was chock full of red-haired women in the late nineteenth century, women with alabaster skin, long manes of fiery hair and an ethereal look to them that had the pre-raphaelite painters swooning with joy. (Not. Some such gorgeous creatures existed and were gracious enough to model for quite a few of the painters in question) 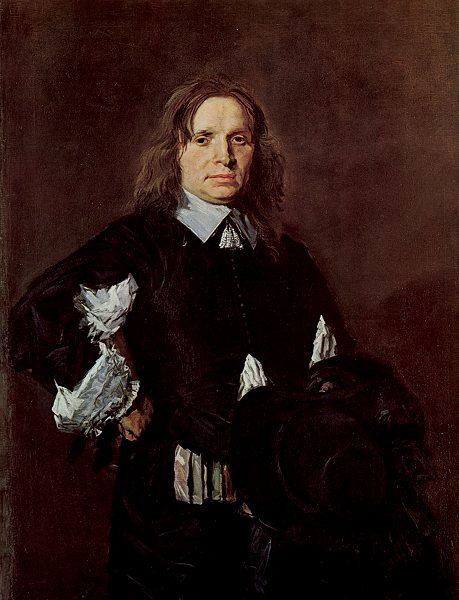 Black and sober, but rather dashing (Frans Hals)

And if we’re to summarise the fashions of the mid seventeenth century on portraiture alone, we might end up believing that everyone in Cromwell’s England – or the Dutch States – went about in stark black. Not so, rather this reflects the fact that black cloth was EXPENSIVE, and when you’re sitting for your portrait you want everyone to see just how rich you are. Also, it was probably politically prudent to present a serious, somewhat austere façade to the world at large. A few decades on, and the portraits would go wild and crazy with pastels, with women wearing rustling silks and pristine linen, their cheeks rosy, their hair uncovered and wild. Once again, it was fashionable to be painted as a lounging lady in deshabillé. And it was politically prudent to represent yourself as anything but serious and austere …

Throughout these rather tumultuous decades in the seventeenth century, normal people would have waked about in homespun, dyed brown or green or mild yellow. Much more becoming in many ways, but definitely not top of the list when people dreamed about sartorial elegance, oh no, people wanted black –  delicious silks in shades of pinks or lavender were so far beyond their means they didn’t even qualify as dreams.

It’s interesting with black; in Sweden people of the working class would have worn a black dress for their marriage well into the twentieth century, and the dress – as well as the matching black suit worn by hubby – would be reused at christenings, confirmations, other weddings, one dress to see you through all of the important events in life. Dresses were let out, taken in, hemmed upwards, downwards, little modernising details such as a new collar, maybe a belt would be added, but ultimately it was always the same dress, so carefully preserved.

Even today, black is always right – well, except at weddings. Women finger little numbers in black that will showcase whatever it is they want to showcase, combine them with black hose, black heels, and they’re ready for more or less anything.  Men saunter into board rooms in three piece black suit, polished black shoes, and every thread covering their body yells “power” – assuming they’re not wearing a cheap suit that wrinkles at the back of the knees and along the back.

I love black. Some years back it was almost always black, until the day I was at one of those colour analysts who looked at me, tilted her head and smiled.
“You’re an autumn,” she said, shaking her head so that the strawberry blond tresses gleamed in the overhead light.
“Ah,” I said, not at all sure what that meant.
“So am I,” she went on. Well bully me; the girl in front of me was utterly gorgeous, so this could be my lucky day and any moment now she’d wave a wand over my head and hey presto I’d transform into a glittering autumnal beauty. Not so. Instead she leaned forward and quickly described the standard characteristics of an autumn type, ending by sitting back with a sigh.
“The black has to go,” she said. “It makes you look old, and your skin looks grey.”
“Oh.” (Not my normal gregarious self) I tugged at the sleeve of my – in my opinion – very nice black jumper.  Somehow it didn’t feel like the right moment to tell her all I owned was black.
“You should wear rusty reds, mild oranges, mustard yellows and olive greens,” she went on. Of course, she was in a olive green jacket over a cream shirt.  I had nothing in those colours…
Okay, so I tried. I bought things in green and brown, in muted red and dull yellow. I put them on. I twirled. I took them off. I guess I’m a black autumn – or maybe I just like looking old and grey. Or maybe I have looked too much at portraits from the seventeenth century and gotten stuck on the Puritan look… Or maybe I just can’t be bothered. And hey, at least my boots are red.

Someday, people in the future will study the photographs/portraits of today. Given the prevailing definitions of beauty, thin women consisting of too much eye and far too little flesh will stare back at them. There will be a lot of bare skin, a lot of what might look of serious malnutrition. I wonder what they’ll make of it, those future people. Will they conclude that we had a fetish on skinny, exhibitionistic  women and hunky men? Will they think that class and wealth depended on (small) size? Or will they dismiss those glossy photographs of doe-eyed overly slender women as being nothing but an impossible ideal?

Whatever the case, this much as I know; as time passes so do our concepts of beauty, the florid voluptuous women in a Rubens painting contrasting just as much with the Roman matrons staring down at us from restored frescoes as with the laughing dancers of a Toulouse-Lautrec painting. Stylish Ancient Egyptian women jostle with the daintiness of a Japanese geisha, the rosiness of a water nymph in a painting by Zorn has very little in common with the languid looks of the naked Maja depicted by Goya. In their own way, I find them all beautiful.

“A thing of beauty is a joy for ever.” Too right! And now I aim to spend the rest of the evening contemplating my own personal piece of joy. What this might be? Go figure!

9 thoughts on “A thing of beauty is a joy forever…”