I don’t think Mrs Cavewoman paid all that much attention to what she was wearing – at least not for the first ten thousand years or so. Or maybe she did …
“Why can’t you kill me a nice leopard for a change, huh?” Mrs C glares at Mr C over dinner. “Look at her, at pretty little Ms Fancypants over there, her man makes sure she’s dressed nicely, doesn’t he?” She uses the half chewed bone to point at Ms Fancypants, a rather attractive brunette thing that is sporting a nice spotted fur, draped seductively over a large, well-rounded bottom.
Mr C stares, mouth falling half-open. “Ow!” he exclaims when his missus clobbers him over the head.
“What are you staring at her for?” she demands.
“But you said …”
Let’s leave them to their little quarrel. And yes, Mr C will within a week or so come home not with a leopard but with a very dead, black panther, and voilá, a foundation to all future fashion has been laid.
“So becoming, isn’t it?” Mrs C purrs, stroking the silky black fur that now adorns her posterior and most of her chest. She chuckles. “Spots are so vulgar, don’t you think? Us classy women, we wear black.”
Ms Fancypants pouts, and three nights later she steals the black fur and … No, no, no. That is a far too long and far too messy little story.

We leap forward in time. In the fifteenth century, high foreheads were in, and women plucked their hairline and eyebrows to create a domed forehead that went all the way up to their head wear. To us, the serious ladies that gaze down at us from Flemish paintings of the times look somewhat … eh, exaggerated? (And BTW, note that Van Eyck’s painting below, the man is wearing … yupp, black. I do love his hat…) 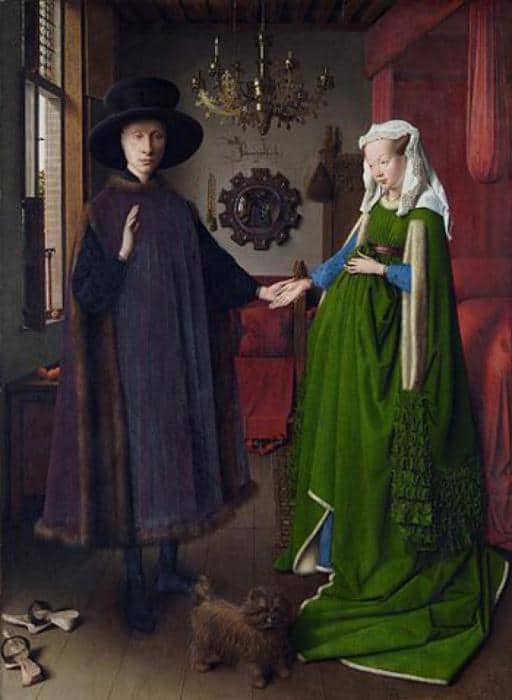 However, to judge from portraits might be a tad dangerous. After all, if we’re to summarise the fashions of the mid seventeenth century on portraiture alone, we might end up believing that everyone in Cromwell’s England – or the Dutch States – went about in stark black. Not so, rather this reflects the fact that black cloth was EXPENSIVE, and when you’re sitting for your portrait you want everyone to see just how rich you are. Also, it was probably politically prudent to present a serious, somewhat austere façade to the world at large. (A few decades on, and the portraits would go wild and crazy with pastels, with women wearing rustling silks and pristine linen, their cheeks rosy, their hair uncovered and wild. Once again, it was fashionable to be painted as a lounging lady in deshabillé. And it was politically prudent to represent yourself as anything but serious and austere …)

Throughout these rather tumultuous decades in the seventeenth century, normal people would have waked about in homespun, dyed brown or green or mild yellow . Much more becoming in many ways, but definitely not top of the list when people dreamed about sartorial elegance, oh no, people wanted black – deshabillé and delicious silks in shades of pinks or lavender were so far beyond their means they didn’t even qualify as dreams.

It’s interesting with black; in Sweden people of the working class would have worn a black dress for their marriage well into the twentieth century, and the dress – as well as the matching black suit worn by hubby – would be reused at christenings, confirmations, other weddings, one dress to see you through all of the more important events in life. Dresses were let out, taken in, hemmed upwards, downwards, little modernising details such as a new collar, maybe a belt would be added, but ultimately it was always the same dress, so carefully preserved.

Even today, black is always right – well, except at weddings. Women finger little numbers in black that will showcase whatever it is they want to showcase, combine them with black hose, black heels, and they’re ready for more or less anything. In some cases, this borders on the ridiculous – I don’t know how often I’ve groaned when one of Mr Bond’s playmates sets off at a gallop in six inch heels with the baddie quickly gaining.
“Kick your shoes off!” I yell, which makes my family fall over laughing (I always do this, just as I always, always, cry my eyes out when watching Lord of the Rings and Sam is dragging/helping Frodo up to Mount Doom. There’s one particular place where I always say “You know boys, it’s Sam who’s the real hero” except that nowadays I never get to say that as my dear sons will beat me to it – once again laughing their heads off.)
But seriously, Ms Agent; if you’re being chased by someone who has the obvious intention of killing you, get rid of the heels.

Being of a somewhat rounded shape, I have for years believed in the slimming effects of black. Also, in my line of business, power suits tend to be black, giving an adequate impression of gravitas. Since some years back, I rarely do suits, and when our auditors come to visit – most of them in black suits – I am mostly relieved that I no longer have to wear them, having reached an age and position where I damn well dress as I please.
Don’t get me wrong; I love black. It used to be I almost always wore black, until the day I was at one of those colour analysts who looked at me, tilted her head and smiled.
“You’re an autumn,” she said, shaking her head so that the strawberry blond tresses danced in the overhead light.
“Ah,” I said, not at all sure what that meant.
“So am I,” she went on. Well bully for me; the girl in front of me was utterly gorgeous, so this could be my lucky day and any moment now she’d wave a wand over my head and hey presto I’d transform into a glittering autumnal beauty. Not so. Instead she leaned forward and quickly described the standard characteristics of an autumn type, ending by sitting back with a sigh.
“The black has to go,” she said. “It makes you look old, and your skin looks grey.”
“Oh.” I tugged at the sleeve of my – in my opinion – very nice black jumper.  Somehow it didn’t feel like the right moment to tell her all I owned was black – well, with the odd dash of daring red.

Anyway, since then I’ve implemented a few variations to my previously so monochrome wardrobe. I have blue, deep green, more reds and yes, there’s a brown (so right for us autumn blondes) as well. But when it’s time to dress up out comes the black. I have black silk, black wool, black cotton, and glory of glories, a brand new black velvet dress. I totally agree with Mrs Caveman: us classy ladies, we wear black!