Every now and then, I sit down to have a serious one-to-one chat with yours truly. Okay, so the conversation is generally one-sided, as I haven’t progressed to doing different voices for different sides of my personality, but the purpose of these little tete-a-tetes is to remind myself why I write. Primarily for me. You see, sometimes I forget that my main source of inspiration and energy is the desire to write what pleases me.

These meetings tend to be quite the hub-bub. Some of my more vociferous invented characters will take the opportunity to remind me that very much of what I write affects them – and they really want a say in it. Not about to happen, I remind them. After all, life is usually a long sequence of surprises (big or small) no matter if you’re living in the real world or in between the pages of my novels. Except, of course, that Alex Graham is of the firm opinion she exists well outside my writing. (She does. She swishes around in my head more or less all the time) Matthew Graham merely smiles. He knows this particular lady (me) has a crush the size of an elephant on him, and ergo, where I go, he goes. But I don’t tell Alex that. She isn’t good at sharing…

All of the above probably has the more pragmatic among my readers rocking back in their chairs. What, she admits to having conversations with her characters? Huh. I would argue all writers do. We need that spark of life from our characters to properly flesh them out, develop them into tangible beings. Things do, however, become problematic when they start expressing opinions about everything in my life – but I’m not going there. At least not today.

So, where was I? Oh, yes: a writer writes to please himself. A painter, I presume, paints to please himself/herself. Nah-nah-nah, some of you say, reminding me that many are the artists and writers who have sold their talent for commercial rewards. Even that star among artists, Michelangelo, painted and sculptured on commission. Yes, he did. But somehow I don’t get the impression Michelangelo did much compromising on quality – or on being true to his ideals. I truly believe he was proud of his work – you see, it pleased him. (And in his case, if it lived up to his own exacting standards, he assumed the rest, maybe with the exception of Raphael, would like it as well, but then Michelangelo never liked Raphael – professional jealousy, one presumes)

I realise that Michelangelo is not perhaps the best example to bring forth. The man was a genius, his talent so bright no one in their right mind would attempt to interfere with his creative process. Many, many more artists (and writers) are far from geniuses, and somewhere along the line the artist who wants to eat may have to compromise. The portrait painter in the 17th century who survived from commission to commission was not about to risk his future by depicting Mr X (a rather ugly man) as he was. After all, Mr X had requested a portrait of himself because at some level Mr X was convinced he would look good hanging on a wall for all eternity. So the artist had to do some magic – a tradition that has survived most hale and hearty all the way to us, when Photoshop allows must of us to look great, even if we don’t.

I guess it all comes down to how dependent you are on your creative efforts to feed yourself. If yes, of course the artist must compromise to keep his children in food – but I suspect many such artists have felt physical pain at doing so. I am fortunate in that I don’t need to write to feed my kids. (And three of them no longer live at home) I write, as I remind myself, to please myself. Except I don’t. Not only. If I only did it for myself, why go through all the angst of publishing? No, it is time to come clean and admit I write to please myself AND my potential readers. Many, many readers, preferably.

My father was an accomplished amateur painter. He would stand for hours before his easel and consider just what shade of green he wanted for that specific leaf. Or he would hum happily to himself as he created a new collage. For him, painting was about escaping. Every Sunday, he would allow himself some hours in which he lost himself in his creative efforts, no longer the efficient business man, no longer the man who put the bacon on the table, but simply Ingvar, a man who once dreamed of becoming an artist but who got caught in the hamster wheel of life. Don’t get me wrong; I don’t believe he was unhappy with his choices – he loved his work – but sometimes the dream reared its rosy little head inside of him.

My writing started out as something similar. Hours in which I escaped into a world where I called the shots. This was before Alex and Matthew  grew into such formidable presences as they are today. Before Adam de Guirande popped up in my head, with his slow smile. Before that endearing Hannah Carolina and her sticky fingers, and definitely before Jason and Helle, torn apart by fate. These days, I have resigned myself to not calling the shots. I’m some sort of glorified secretary at times, fingers going numb in my effort to keep up with all the whispered suggestions from my characters, all the images that flash through my head. BUT. My writing is still an exquisite pleasure, moments in which I no longer think about the more mundane aspects of life, concentrated as I am on creating. 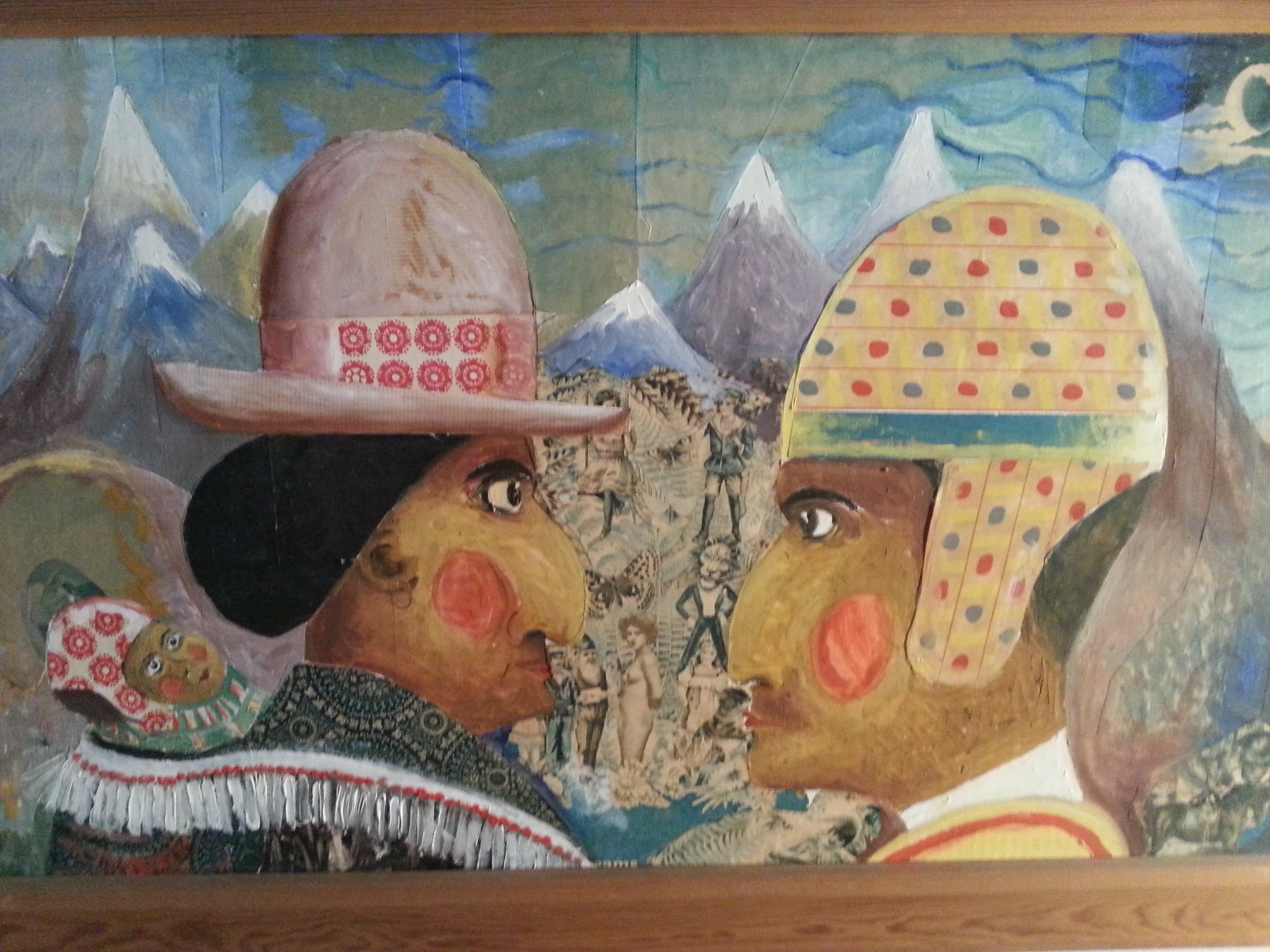 My father once expressed that his painting helped him develop professionally. Seeing as he was the CEO of a company, it is sort of difficult to see how his painting could impact his work life – or at least that was what I thought, until now, close to forty years later, when my writing most definitely has a positive influence on my daily work. You see, since I started investing serious time in my writing, my creative processes have improved. I trust my instincts more, and as to thinking out of the box – well, if you write about time travellers and reincarnated souls and more or less develop friendly relationship with real people who died seven centuries ago, thinking out of the box very much becomes the norm.

Likewise, the structure I implement at work (thinking out of the box is all very fine, but in some areas, such as accounting, it is definitely frowned upon) helps me in my writing. I may be wildly creative, have tons of little post-its lying about, but once I sit down to properly write, I adopt a serious approach, staring with a thorough structuring of my research. (Research sounds so dry. In reality, I wallow in lovely, lovely books about people and times I want to know more about. Lucky me!)

At one point in time, I dreamed about being a full-time writer, bring the world to its knees with my sweeping masterpieces. My father, in a surprisingly gentle manner for a man as rational as he was, reminded me that dreams are dreams. With a wry little smile, he told me that some things in life are best kept as precious bubbles, stolen moments in time uniquely our own.
“You’re too conventional to handle the harsh reality of surviving on your art,” he said, “as am I.” Hard words to hear when you’re twenty something – after all, what young person wants to be defined as ‘conventional’?

Many years have passed since then, and these days my father isn’t around. But whenever I sink into the world where my creative juices flow unhindered, I swear I can feel him at my side, a proud gleam in his eyes. And he was right, of course. I’ve never had to compromise to eat, so my writing remains a passion, an urge. It flowers as it pleases me – and my voluble characters – and quite often what pleases me pleases my readers. And if it doesn’t, well then I must remember that I’m mostly doing this for me.
“And for us,” Alex Graham says, sweeping her arm in a gesture to encompass all my characters, presently ranged around tea and scones (I do have a very roomy brain, okay?). Yes, of course for them, for the imagined people who have become my beloved friends and constant companions. “Sheesh,” Alex mutters, using her apron to dab at her eyes, “you really do have a way with words, don’t you?” Duh!

1 thought on “When the creative juices flow”