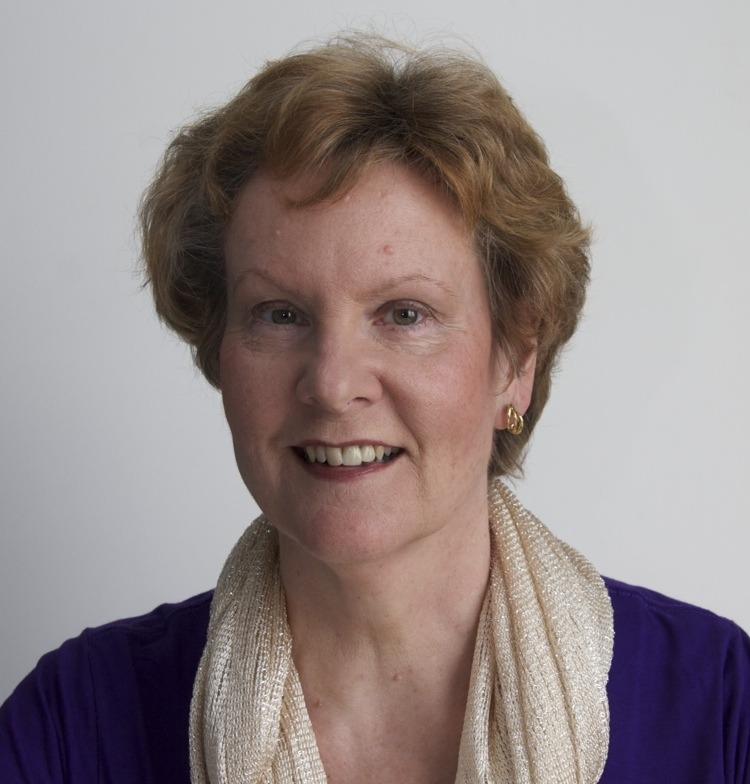 I have developed something of an addiction for Alison Morton’s books. If you haven’t read them yet, I can assure you you’re in for a great read, even if my adrenaline levels still have to drop after my recent read of the third book in the series.

Anyway; today, Ms Morton – as kick-ass in her own way as her heroine, Carina Mitela – visits my blog to discuss trilogies – and I am rather happy to read she is expanding her trilogy into a series. As a writer of a series myself, I can only agree with most of what Alison shares below. Just like Alison, I strive to make my books stand-alone while retaining the continuity of a series, and for me Alison’s first point – to know the entire plot in advance (or think you do; as Alison points out, sometimes things happen as you write) is fundamental.

The one thing I would add to Alison’s excellent post is that as a writer of a series one had an obligation to the readers to keep the books coming at a reasonably regular pace. Waiting years for the next instalment is somewhat of a downer – at least for me.

Now, that is enough from me. Instead, I turn you over into Alison’s very capable hands!

The strangeness, and freedom, of writing a trilogy

This month, the third book in my Roma Nova thriller series, SUCCESSIO, is out in the world. But as I raise a glass of bubbly with friends, fans and fellow writers to celebrate, I can’t help but smile. 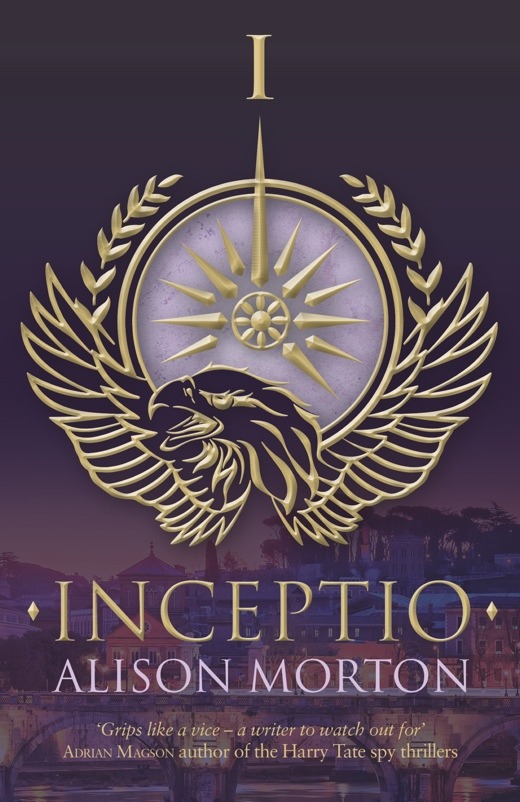 When I started my first novel, INCEPTIO, I had no idea what I was doing – it was an impulse after seeing a dire film and thinking I could write something better. Not even halfway through the first draft, I realized I had a far bigger story than I’d anticipated. So I decided to do the classic thing – it was going to be a trilogy.

While I was scribbling book 1, my focus shifted to planning book 2, which was going to be the pivot for 1 and 3. Some trilogies develop from book 1 and the original story widens out into an almost impossible sprawl in order to make each book more exciting than the previous. I wasn’t having any of that!

Although I saw it differently at the time, the eighteen months of rejections of book 1 gave me an invaluable period in which to plan, draft and hone the whole trilogy. I blush at what INCEPTIO would have been like without that maturation.

So what did I learn and what would I pass on to other writers?

1. Work out the entire plot in advance.

All three of my books are set in an imaginary country, Roma Nova, and follow the same heroine, from when she (and the reader!) discovers Roma Nova to sixteen years later. And, of course, she will save the world and hopefully herself. But that’s too vague. Each book needs its own story, but one which contributes to the overall plot arc of the trilogy.

Crudely speaking, book 1 sets the scene, introduces the world, the ‘rules’ of that world and the main characters. Book 2 consolidates, widens and sets the ground for the final reckoning in book 3.

It’s a good exercise to jot down a few notes about the first and last scenes of each book as beginnings and endings set up/resolve/link points in the bigger story and keep from wandering off the overall story arc. But don’t be surprised if the larger story does change with the telling of the first instalment…

However, each book must stand on its own as a complete story. A reader may pick up book 2 first and while they may become eager to find out what went before and what happened afterwards, they must have a satisfying read from the book they bought. So you have to drip in enough backstory to bring the new reader up to speed without boring the established fan.

2. Know your characters in advance.

Adding a whole load of new characters in each book is tempting. I confess to a lot of characters, but my excuse is that Roma Nova operates on collectivities like families, military, even criminal organisations. One of the core themes running through all the books is the conflict between actions of the individual and the requirements of the collective.

Recycling characters in each book not only helps eliminate ‘additional character creep’, but is a pleasure for both writer and reader as we see each individual develop their own story.  However, you do need to introduce new people now and again and however reluctantly, you should kill off one or two or you risk making your world too much like Shangri-La or Pleasantville. 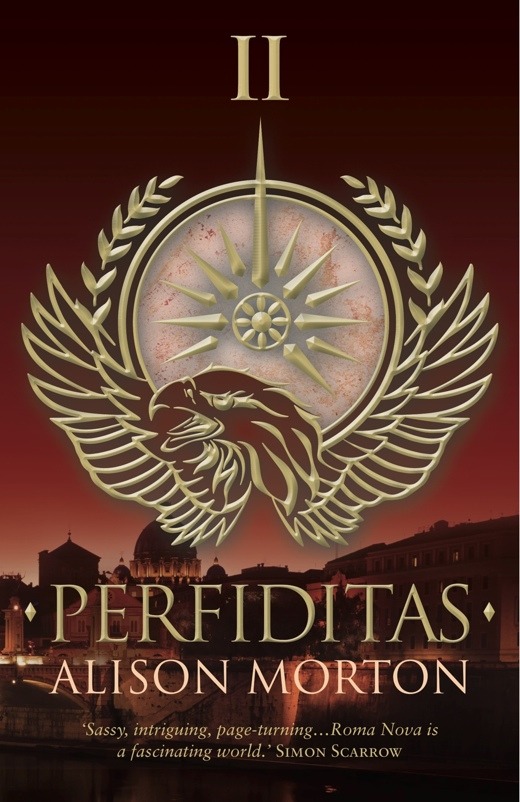 3. Work out big secrets in advance and scatter little ones throughout all the books.

As a reader, I like a good surprise or heavy drama at the end of books, or at least a ‘twist in the tale’. And writers should give little hints about this throughout the book – that’s good writing craft. But as a writer, I love laying little ‘Easter eggs’ in one book that hatch in another. I was lucky that I was able to do this with INCEPTIO, PERFIDITAS and SUCCESSIO as I had all first drafts done before INCEPTIO finally went to print.

I use a timeline grid for all my books and jot down a few notes about what happened in each chapter/scene and the timing. Not only do I then have an index of events for each book, but I can see when and where to lay these ‘eggs.’

4. Intrigue by revelation over a longer stretch

With a trilogy, you have the advantage, and fun, of being able to reveal backstory and other facets of your characters over a longer span than one book. This needs to be done carefully and not be an excuse for padding. In an epic, saga or high concept story, this adds and rounds out. We all love ‘deep lore from the past’, hidden family secrets or a forbidden passion. Revelations at the proper time strengthens the bonds between the books as well as giving the reader an insight into a character or event.

Your head may be completely stuffed with information about your setting, you may have notebooks or files full of research or you may just live in your books’ world. But there’s no escaping the need to have consistent information to hand on the internal values and culture, governmental, societal and economic structures, geography, including agriculture, history, sources of income, education, food, religion and, of course language.

I don’t have a map, but I do know where Roma Nova is and that Castra Lucilla in to the south of the city and Aquae Caesaris and Brancadorum are to the west and east.

I maintain a list of characters – you find a ‘dramatis personae’ in each book. You have to remember, though, that characters change job, get promoted and move on. And something I’ve found indispensable is a spreadsheet of ages, i.e. who is what age when something happens. This is essential, especially if you are writing a trilogy or saga that spans time and refers to past events. You can’t really have somebody leading a charge in a battle if they are only three years old!

The very worst thing? I’m speaking as a reader here. I nearly throw the book on the floor when something pops up like a deus ex machina (‘alien space bats’ in science fiction speak) in a sequel or directly contradicts something in a previous book and there has not been the least hint about it. Even if you as a writer think up the cleverest idea in the world for your current book after the first has gone to print, don’t do it! Star Trek fans will cringe at the memory of the controversy over the changed Klingon physical appearance. One character told the humans not to ask – it was a Klingon-only secret – and another said it was due to a terrible disease in the past. Hm.

The trilogy in evolution?

Well, SUCCESSIO, the third Roma Nova thriller, sets off into the world this month and I think Roma Nova fans will enjoy it. But it doesn’t end here – readers are clamouring for further Roma Nova stories and I have plenty more to tell. So now I’ve turned the trilogy into the start of a series. I have at least three more planned around a significant secondary character and then, who knows? 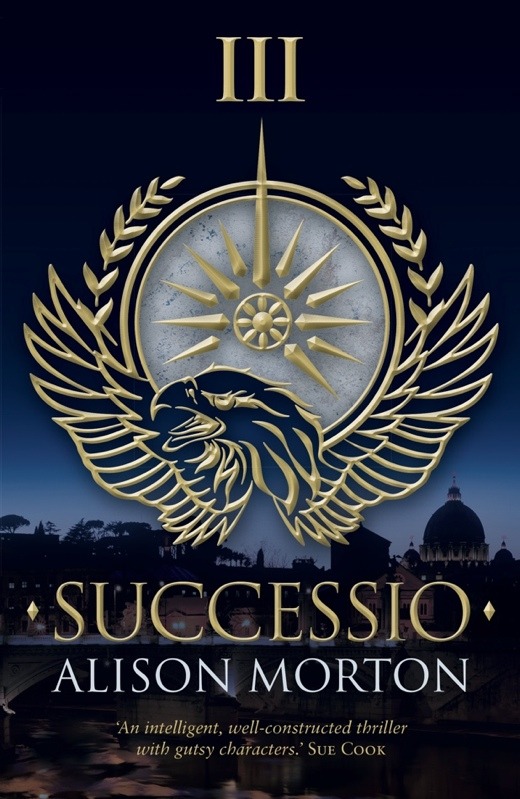 So what’s the third book, SUCCESSIO, about?

Roma Nova – the last remnant of the Roman Empire that has survived into the 21st century – is at peace. Carina Mitela, the heir of a leading family, but choosing the life of an officer in the Praetorian Guard Special Forces, is not so sure.

She senses danger crawling towards her when she encounters a strangely self-possessed member of the unit hosting their exchange exercise in Britain. When a blackmailing letter arrives from a woman claiming to be her husband Conrad’s lost daughter and Conrad tries to shut Carina out, she knows the threat is real.

Trying to resolve a young man’s indiscretion twenty-five years before turns into a nightmare that not only threatens to destroy all the Mitelae but also attacks the core of the imperial family itself. With her enemy holding a gun to the head of the heir to the imperial throne, Carina has to make the hardest decision of her life…

Connect with Alison on her blog http://alison-morton.com/blog/

6 thoughts on “The kick-ass lady is back!”