Hands up those that go sort of weepy when they watch John Smith romance Pocahontas in the Disney movie named after the Indian princess. No one? Ha, not quite sure I believe you… Anyway, apart from being a beautiful movie with some great music, Pocahontas as per Disney is also a historical mess.

Did Pocahontas exist? Yes. Did John Smith exist? Absolutely. Was John Smith a brave and intrepid adventurer who more or less singlehandedly established the colony of Jamestown? Umm… well, John would probably say “yes”. John was an early believer in self-promotion, and wrote a lot of books about his adventures. To be fair, John Smith was instrumental in keeping the fledging colony alive during the first few years and was an avid explorer. 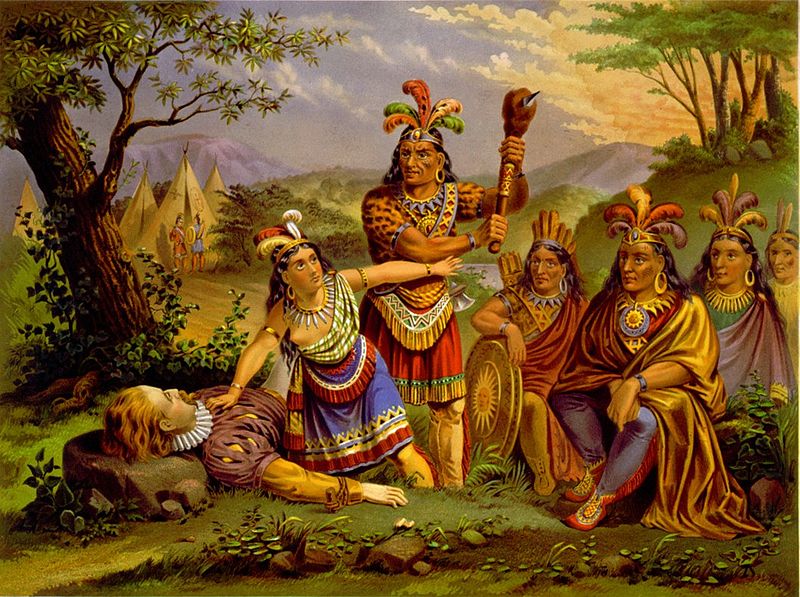 Did Pocahontas and John Smith meet? Yup. According to John, the adolescent Pocahontas threw herself over him to save him from certain death. Very brave, don’t you think? Whatever the case, John did interact with Pocahontas’ tribe, and as she was the daughter of the chief, chances are they would have met. Maybe she was curious about this man, so different from her own people. Maybe his eyes lingered a bit longer on Pocahontas than on other Indian girls, but from there to the full-blown love story described in Disney’s movie, it’s a looong stretch.

John Smith left Virginia in 1609, when Pocahontas was about fourteen, and never returned. She, on the other hand, was captured by the English in 1613 (hostilities between her people and the colonists flared up as regularly as clockwork) and was held prisoner for two years. After her captivity, she converted to Christianity and married John Rolfe, a prominent member of the Virginia colony. John Rolfe, by the way, was the man who brought the tobacco to Virginia, thereby converting the struggling colony to one of the richest places in the world.

There is no record of Pocahontas and John Rolfe running hand in hand through the woods while singing about the colours of the wind – even if I hope they did, accompanied by a raccoon or two. Rather, their marriage seems to have been an attempt to establish some sort of treaty between her people and the colonists, and for a short period it worked. Pocahontas gave John a son and then she embarked with him to England, where she sickened and died of a mysterious ailment.

This sad and premature death is something Pocahontas shared with many, many of her brothers and sisters. Upon the white man’s arrival to the North American shore, there were approximately 7 – 10 million Native Americans. A century later, the numbers had been reduced by 40-80% depending on the region, and most of this decimation was caused by the diseases the Europeans brought with them, notably measles and smallpox. 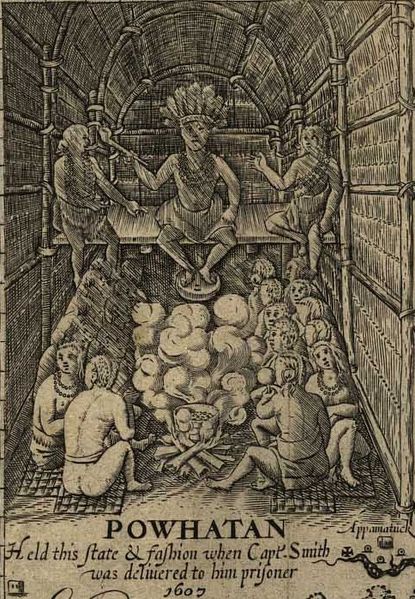 Pocahontas was a Powhatan, a confederation of tribes that had their powerbase in present day Virginia. Over time, these tribes would be more or less wiped out due to a combination of epidemics and hostilities with the white settlers. Many more Indian tribes would succumb to the same deadly combination, and in my book A Newfound land, the Indians in question are Susquehannock, northern neighbours of the Powhatan.

The Susquehannock were to suffer a similar fate to that of the Powhatan. Disease and warfare – both with their fierce cousins the Iroquois and the white settlers – would leave a once flourishing nation near on extinct. In fact, today we have no idea what these Indians may have called themselves, because there is no one around who speaks their language anymore. Once a language dies, the culture that flourished with it dies as well, and so we have no idea as to what beliefs, what myths the Susquehannock held dear. It’s almost as they never existed – well, apart from the odd artefacts that are presently displayed in one or other museum.

But the Susquehannock did exist, a power to be reckoned with, masters over a large swathe of land that stretched from Delaware, through parts of Pennsylvania and into Maryland. They were one of the people visited by John Smith as he went exploring along the Chesapeake Bay, but from this encounter there are no anecdotes of pretty girls protecting John with their own bodies. Maybe there was no need for such drastic measures, as the Susquehannock were friendly towards the white men. John Smith was very impressed by the Susquehannock, claiming they went around dressed in wolf and bear pelts and were all of them big and strong, fully capable of beating the brains out of a man. Despite these ferocious qualities, for the first few decades of their co-existence both the Susquehannock and the colonists prospered – a win-win situation for both.

In the 1670’s, the constant skirmishes between the Powhatan and the Virginia colonists escalated into open warfare, and through a series of unfortunate events, the Susquehannock were dragged into the conflict. A decade later, the once so mighty Susquehannock had ceased to exist. Their wooden forts had been razed to the ground, their men had been slain, their women enslaved, and what few remnants remained had fled due north-west, seeking the protection of the Iroquois.

Some Susquehannock made it over to Pennsylvania and founded a community there, Conestoga Town. There they eeked out a living far removed from their former life, hiring themselves as labourers to adjoining farms. But in 1763, the last three dozen or so of true-blooded Susquehannock were massacred by the Paxton Boys, a militant group of white bad boys that killed whatever Native Americans they could get their hands on in retaliation for the recent French-Indian war. Less than two centuries after their first contact with the European settlers, the Susquehannock had ceased to exist.

Qaachow in A Newfound Land is a Susquehannock. He shares his name with one of the victims of the 1763 massacre (one of the few lists we have of Susquehannock names), and sometimes I worry that the little boy so brutally murdered in the 18th century is a great-great-grandson of my fictive Qaachow. But my Qaachow is not a defenceless boy, he is a leader of men, a chief, a man who views the white settlers on lands that were once his with more curiosity than ill-will – at least initially.

Qaachow is my homage to a people that no longer is, to a people that extended their hands in generous welcome to the palefaces that landed on their shores – a gesture they were to bitterly regret. As Qaachow says to Alex, “We should have listened to our wary brethren of the north and pushed you back into the sea.” In retrospect, of course they should. But then, most of us don’t know today what tomorrow’s consequences of our actions will be. That’s probably a good thing, I think. Just as it is a good thing if people do extend a helping hand to those that need it. Sadly, I’m not sure the restless shades of the Susquehannock agree. The price they paid was way too high.

9 thoughts on “All those fading colours in the wind”