Some weeks ago, I had the great pleasure of reading Cathie Dunne’s book about Poppa of Bayeux and her hubby Hrolfr, a.k.a. Rollo (To us Swedes, he is Gånge-Rolf, so named because he was so big and strong no horse could carry him, hence he had to walk. Gånge means walker)

Anyway: I realised I was woefully ignorant about Poppa, and so I reached out to Cathie and asked her to pop by and educate me – and, per definition, all you lovely peeps. Cathie leapt to, and below is her introduction to a lady from the very shadowy past.  Enjoy!
*************

Who was Poppa of Bayeux?

The recent emergence of popular Viking themes in television and literature has brought one (in)famous Northman to the attention of viewers and readers: Rollo the Viking.

In a combination of strategic attacks and political cunning, Rollo (aka Hrólfr) was responsible for laying the foundations that later formed the basis for the duchy of Normandy. However, contrary to some so-called ‘sources’, he never held the title of ‘Duke of Normandy’, nor did his son and successor, William Longsword.

Following his attack on Bayeux, then in the north-western Frankish region/county of Neustria, he married Poppa ‘in more danico’, the Danish custom – by handfasting, and not by a Church blessing. We must not forget that, at that time, Rollo was still a Pagan in the eyes of the Church.

But who was this young woman, Poppa. And why was she important to Rollo?

Today, a pretty statue reminds visitors to the picturesque Normandy town of Bayeux of Poppa’s existence. But as with Rollo, her background consists of many theories and guesses.

Dudo of Saint-Quentin asserts she was the daughter of Bérenger, a Frankish Count of Rennes and Bayeux, or was he perhaps Count of Neustria? Hmm.

Or was her father one Guy de Senlis who, otherwise, does not appear in any records?

To me, the link to Bayeux seems the most likely scenario, as it was there that Poppa appears to have met her future spouse, but it is still unconfirmed. Correct accounts are scarce, even if genealogy sites seem to favour certain versions. Those sites are, of course, to be used with much caution.

For my novel, Ascent, I have chosen for Poppa to be the daughter of Count Bérengar of Bayeux and his diseased wife. I dispensed with his other potential titles, as I deemed them confusing for readers. The title places her firmly in Bayeux, her home, where she would run Bérengar’s household. 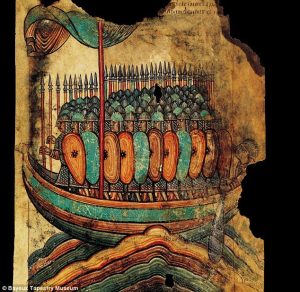 Bayeux was a small Frankish settlement in Neustria, just inland from the coast. It’s located in a strategic position, with easy access to the coastline with not only rocky outcrops, but also useful landing bays for ships – bays that were perfect for a small Viking attack from the sea.

We do not have Poppa’s year of birth, as records vary, but it appears she was still a very young girl when she was wed to Rollo. It would have been a strategic match, so her exalted status as daughter of a count is highly credible.

In the early medieval area, marrying at such a young age was not unusual, as many marriage agreements were reached by parents, but the attack on Bayeux meant that her situation was different.

Did her father arrange for her to marry Rollo, perhaps as compensation, or to save lives? Or was her father killed, and she was left defenceless, at the mercy of the raiders? In any event, Rollo the Raider found her to be in a useful position for his future plans.

Their wedding was recorded as ‘in more danico’. In a Frankish region, this was unusual, as the Franks had, by that time, fully embraced Catholicism. Another point that appears to confirm that their marriage was of some political importance.

Then, Rollo appears to travel a lot. He is recorded to have been in various parts of Francia, most notably the Seine estuary which he knew from the days of the Siege of Paris. But he was also potentially in England, where one or both of their surviving children were said to have been born. By that time, Poppa was of age, and I’ve been wondering about his heading off to do some raiding and negotiating, leaving his young bride to grow up. What she was doing in that time, we don’t know, but my guess would be that she remained in charge of her manor at Bayeux, with the help of his men to keep it safe from Frankish or Breton attacks.

It would also hint at him waiting for her to be of age, before embarking on having children.

Now, this may be a modern perception, I admit, but not all medieval men were into seducing child brides. Maybe it was simply the case that Rollo preferred grown-up women (which could mean age 13 onwards, of course, in those days).

It has been alleged that Rollo was a bigamist – in the modern sense – as some records hint at a marriage to an illegitimate daughter of King Charles of the Franks, with whom he reached an important accord in 911. The treaty marks his ascendancy in Neustrian politics, and the beginning of Normannia/Northmannia. He was likely appointed as ‘jarl’, at least in his circles, and the name of the region begins to shift at that time.

But there are no official records of Gisela. This in itself is not surprising, as in those days births of daughters were often omitted from the records. Some were merely noted down as ‘a daughter’. But given her prominent role as a supposed wife of a powerful Pagan who turned Christian as part of the agreement, I’d have expected some mention.

Or was she invented later, perhaps to give Rollo and his descendants a hint of legitimacy? Hm…

Poppa, meanwhile, would have been cast aside during that time, and, again, not much is known.

But whatever Rollo’s marital status, the fact that Poppa’s son, William, remained Rollo’s heir, is of great importance. Had Gisela existed and given Rollo a son, surely William, as an illegitimate child, would have been side-lined.

Whatever the truth was, it was Poppa, and no Frankish princess, who is the matriarch of the house of Normandy. She and Rollo created a dynasty whose influence and power grew with each subsequent generation.

I believe Poppa must have been a formidable woman, one caught between two worlds: the Christian Franks and Pagan Norse. She needed wit, strength, and probably much patience to deal with her adventurous husband and his various exploits.

For me, Poppa of Bayeux is the ultimate early-medieval heroine, and I’m thrilled to have begun my new series of the House of Normandy with her. Her legacy lives on.

Thank you, Cathie for that excellent post. And the book that tells Poppa’s story is Ascent. As I mentioned above, I really enjoyed it, so here comes my review: 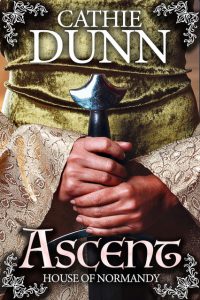 Set in the years round 900 A.D., Ascent is the story of Hrolf, pillaging Norseman who somewhere along the line decides to settle and concentrate on becoming a power to be reckoned with in northern France, more precisely Normandy.

To consolidate his position, Hrolf handfasts with Poppa, daughter of the count of Bayeux. She isn’t all that thrilled. At only fourteen, she views her twice as old heathen husband with some trepidation. And while he wants the political benefits of the union, he isn’t exactly taken by his very, very young bride, which may be why he decides to go off to Rouen and take control of that town, an endeavour which keeps him away from Poppa for so many years she finally loses patience and goes to him in Rouen.

Suddenly, Hrolf realises Poppa is no longer a child. The marriage is consummated, and a year or so later they are forced to flee Rouen when they’re attacked and take refuge in East Anglia, where Hrolf spends the next few years serving a local king while longing to return to “his” Rouen.

They do return, and over the years, Hrolf fulfils his ambitions to expand his territory, At one point, such expansion requires a marriage, and as he has never formally married Poppa, he converts to Christianity and marries Gisela. Poor, poor Poppa, I say.
She retreats behind her dignity.
He misses her.
Gisela hates her.
Things become very, very infected before it all explodes.

Ms Dunne has spun an intriguing and gripping story based on what little fact we have of the period and its principal players. She creates characters who are relatable, despite the divide of more than ten centuries—especially Poppa, who manages to be true to herself no matter the situation. In actual fact, after having met Hrolf and Poppa, I find myself thinking that surely their great-great-great-grandson William the Conqueror must have had some redeeming qualities, some aspects of his personality that reflect on his ancestors.

An enjoyable read—and especially for those intrigued by the years when the Norsemen played such a fundamental part in the shaping history. Warmly recommended. 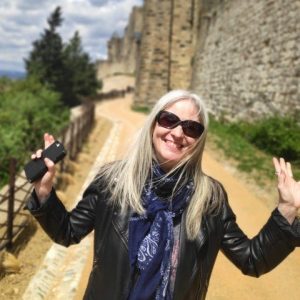 At the moment, Cathie is working on two stories: Treachery, #2 in the House of Normandy series, about Sprota the Breton, handfasted wife of William Longsword, Poppa and Rollo’s son; and The Alchemist’s Daughter, #2 in the Affair of the Poisons series. She also continues to plot a medieval murder mystery series set in 13th century Languedoc at the height of the Cathar persecutions.

When she doesn’t write or coordinate blog tours, she loves researching for her novels, delving into history books, and visiting castles and historic sites.

Cathie lives in the south of France with her husband and two rescue pets.