In 1328, the very young Princess Joan of the Tower, Edward II’s and Isabella’s youngest daughter, was wed to the even younger Prince David of Scotland. Two small children, speaking vows they’d rehearsed but probably didn’t understand. Not exactly unusual in medieval times, but even by those standards Joan and David were very young. Once the ceremony was concluded, little Joan was carried off to Scotland to be raised by her in-laws. 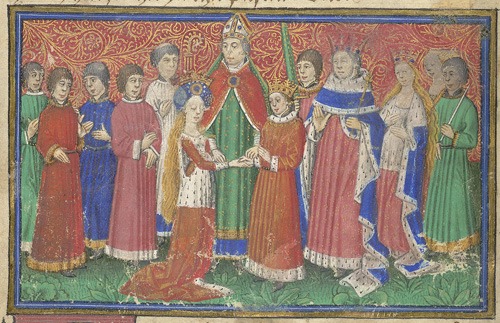 The wedding between the two children sealed the treaty between England, as represented by Queen Isabella and Roger Mortimer, and Scotland, represented by an aging Robert Bruce. It was the culmination of negotiations that began already back in 1326, when Mortimer and Isabella reached out to the Scottish king to ensure he and his men stayed well away from England while Isabella and Mortimer invaded to depose Edward II. Mortimer preferred fighting one enemy at the time, and having to deal with both Edward II’s troops and the Scots would have been too much.
In the event, Edward II never mustered his troops. He fled west, mostly because his dearest friend and councillor, Hugh Despenser, begged him to. The ordered troops under Mortimer’s command (nominally they were under Isabella’s command) found little resistance, and come November, Edward II was a prisoner and Despenser was dead.
So why did the Scots not take advantage of all this upheaval and raid the north? Isabella and Mortimer dangled the promise of a permanent treaty, formally recognising Robert Bruce as king. This would go a long way to stabilise things in the north, and Robert wanted nothing so much as to be able to hand over a peaceful kingdom to his son. So Robert held back and waited for the promised treaty to be delivered. Except it wasn’t. Isabella and Mortimer had other, more immediate concerns, such as pushing through Edward II’s abdication and crowning young Edward III instead.
Midway through 1327, the peace negotiations between England and Scotland broke down. To force the issue, Robert Bruce sent men into the north of England to do some harrying. These men were led by Sir James Douglas and Thomas Randolph, and for a number of weeks they left a trail of destruction in their wake. Unacceptable, according to the very young but bellicose Edward III, and so the English army rode out to defeat these wily Scots and were utterly humiliated by James Douglas at the Battle of Stanhope Park.
Robert Bruce’s tactics worked. The negotiations were resumed, despite the young English king’s insistence that there should be no truce with the Scots. And, once an agreement had been reached, the Treaty of Northampton was sealed by the wedding of Joan and David in Berwick. Edward III did not attend.
In England, this resulted in Joan acquiring a new epithet: Makepeace. She was too young to care, I suspect, but her big brother didn’t like it at all that his baby sister was to be sent off to be raised among the wild Scots. Especially as he didn’t want peace with the Scots. He wanted revenge for Bannockburn and was as eager to hammer the Scots into obedience as his grandfather, Edward I. But for now, Edward III had to bide his time. In his kingdom, his dear mama and her constant companion called the shots. For now.
At the time of her wedding, Joan was all of seven. David was just four, and I can imagine just how disdainful she’d have been of her little groom. “He’s just a baby,” she might have whispered. Did she fully understand that once she and David were joined in matrimony she would be separated from the family and people she knew and loved to be raised in Scotland? Probably not—at least not until the moment came to say her goodbyes. I think it was a sad little girl who rode north.
Robert Bruce did not live for long after acquiring his precious treaty. In 1329 he died, and a boy of five became the new king. A year or so later, David and Joan were crowned, thereby making Joan the first Scottish queen to be crowned. However, not all Scots considered David to be their rightful king. After all, Robert Bruce won the crown by conquest, and one of the other claimants, Edward Balliol, was still around. So the moment Bruce was dead, Scottish unity fell apart—especially as such notables as Thomas Randolph, Guardian of the Realm, and Duncan of Mar died soon after.

In fact, by 1332 the Balliol side had the upper hand—and the support of Edward III. After a devastating defeat at Halidon Hill, Balliol claimed the crown. Little David and his wife were sent to France for safety. From one day to another they went from king and queen to destitute supplicants. Fortunately for them, King Philippe VI of France was more than happy to welcome them, if nothing else to spite Edward III.
We know little of the David-Joan match. It does not appear to have been a passionate affair, in fact some go as far as describing it as loveless. This does not necessarily indicate active dislike, and seeing as they were to spend so many years together, I hope they were at least friends of sorts.
In France, Philippe offered them Chateau Gaillard as a residence. A somewhat big and sprawling place for a ten-year-old boy and his somewhat older wife, but it’s not as a medieval king travelled all on his lonesome.
Joan would spend close to eight years in France. Formative years, years in which she grew from girl to woman. To some extent difficult years, Joan probably being one of the few people in her present surroundings who had any sort of fond feelings for Edward III—especially after the young English King proclaimed his intention to seize the French crown in 1337, thereby initiating The Hundred Years’ War.
Things did not go so well for Edward in the initial stages of his war with France. Also, our gallant and ferocious English lion was strapped for cash, so when he decided to attack France he could no longer afford to offer Balliol support. Those Scots who wanted David back did not hesitate to act and by 1341 David and Joan were back in Scotland.
By now, Joan was pushing twenty. So far, there had been no child. Whether this was due to not trying or not conceiving I have no idea, but I hold it unlikely that David and Joan wouldn’t have consummated their marriage—after all, the purpose of their union was to produce a healthy heir or two.
Anyway, once back in Scotland, David stepped out from under the shadow of his seniors and began to rule in his own name. In 1346 he rode with his armies into England, this to offer help to the French who were presently battling the English in Normandy. Unfortunately for David, there were enough men left in England to offer a spirited defence, and at the battle of Neville’s Cross, the Scots were defeated and David was taken prisoner.

Initially, Joan seems to have remained in Scotland. In fact, she may have found herself in the uncomfortable position of being something of a hostage, a not-so-subtle reminder to the English king that he might have the Scots king, but they had his sister. We know from safe-conducts issued that Joan was invited to visit her husband. Edward even allowed conjugal visits, but whether Joan utilised them is unknown. She did, however, travel to England. One assumes that she must at least have popped by to say hello to her husband, but she also spent considerable time rebuilding her relationship with her mother.
David’s captivity was relatively comfortable. So comfortable that he had opportunity to meet and woo a new love interest, a certain Katherine Mortimer. Who this lady was is still something o a mystery. Given her name one could guess she was related to Roger Mortimer, but if so it must be very, very distantly. What we do know is that David professed he loved her more than he had ever loved a woman—including his wife.

Joan may not have been passionately in love with her husband (casual affection seems more probable), but that doesn’t mean she was all that thrilled at discovering he’d found a mistress. Maybe this was the straw that broke the camel’s neck, because when Edward decided to release David in 1357—in return for a huge ransom to be paid in annual instalments—and allow him to return home (with Katherine in tow), Joan apparently chose to stay in England.
While they did not part on the best of terms, Joan and David remained in contact. As Queen of Scotland, Joan could intercede on behalf of her husband and she did so with quite some success a few years later, thereby negotiating an extension on the annual payments of David’s ransom.
Joan Makepeace died in 1362, just 41 years old. She’d been married for 34 years and a crowned queen since the age of eight, but neither crown nor marriage had brought her happiness. Instead, she’d had a life marked by the constant conflicts both within her husband’s kingdom and between Scotland and England.
David was to outlive his wife by close to ten years. Not so his Katherine who was brutally knifed to death in 1360—the Scottish nobles did not like this foreign lady and her influence over their king. David soon found comfort elsewhere and not long after Joan’s death he married his current mistress, Margaret Drummond. He would never sire a child, and when he died in 1371 the crown passed to his nephew Robert Stewart, the first in a very long line of Stewart/Stuart kings.

4 thoughts on “The peace bride”