In 1327, a very young Edward III mustered his forces and rode north. He had had it with the Scottish rogues who were ravaging the land, and all of Edward’s adolescent body quivered with anticipation at seeing the Scots eat dust.

Thing is, other people in high places—notably the king’s mother Isabella and her lover and co-regent, Roger Mortimer—weren’t all that keen on a full out war with Scotland. In fact, Mortimer and Isabella had treated with Robert the Bruce prior to invading England in 1326, and what they’d dangled before the nose of the wily Scottish king was a permanent peace treaty—assuming Bruce did not take advantage of the turbulent situation caused by Isabella and Mortimer ousting Edward II and his favourite, Hugh Despenser.
Robert the Bruce wanted peace. His country needed peace. So Robert held his horses and watched from afar as Mortimer and his paramour forced through Edward II’s abdication and then rapidly crowned the boy-king.
Obviously, finalising the treaty with Scotland was not the first item on Isabella’s and Mortimer’s agenda. They had a kingdom to heal, an administration to put in order, muttering barons to be put in their place.
On the other side of the border, Robert the Bruce grew impatient. (He was getting on, all of fifty-three, and wanted to leave things in order, which included said peace treaty) When the negotiations were yet again put on hold – or broke down, depending on whose POV you applied—the Scottish king decided to do some serious prodding. He ordered his two captains, James Douglas and Thomas Randolph to invade northern England and create some havoc. A lot of havoc, as it turned out, the raiding Scots leaving burned farms and destroyed villages in their wake.
Which is why, in July of 1327, Edward III did all that mustering. Okay, if we’re going to be correct, it was not the fourteen-year-old king who called to arms, no matter how eager he was to teach those dastardly Scots a lesson. Rather, it was his Regents who came to the reluctant conclusion they had to do something to contain the Scots, albeit that they still hoped for a diplomatic solution.
Anyway: an impressive English army took the field, lead by the Earl Marshal of the realm (Edward’s uncle, the earl of Norfolk), the earl of Kent (Edward’s other uncle) and the earl of Lancaster (much, much older cousin to the king). Roger Mortimer was there as well, and while not given an official command, I think it’s a safe bet to assume he was very much on top of things—it sort of went with his nature.

Edward was of the firm opinion that Scotland was his kingdom. Bannockburn was but a minor setback, and now he was going to teach these Scotsmen a lesson. The fact that not one single Scot agreed with this interpretation was neither here nor there according to our young hero.
Edward had his forces ride under the cross of St George, bright red crosses flapping in the wind as the English army advanced. As an aside, Edward III had a serious thing about St George, whom he considered a far more appropriate saint for his bellicose ambitions than Edward the Confessor. This is why he founded a college dedicated to St George at Windsor (which then sort of took over the chapel previously dedicated to St Edward) and why the red cross is part of the insignia for the Order of Bath. Right: not today’s topic.

James Douglas was just as canny, just as capable, as any of the commanders on the English side. This hero of the Scottish people had stood by his king through thick and thin and would continue to do so as long as he had breath in his body. He had only one objective with his raiding: to force the English back to the negotiation table, there to recognise Scottish independence and Robert the Bruce as Scottish king. It made Edward almost choke just to think of doing so. His grandfather had fought long and hard to bring the Scots to bay, and our Edward was not about to give back what he considered his.
So off the English army went, eager to corner the Scots and force them to fight. Douglas was having none of it. His mounted men easily outpaced the English army, and so it was that as Edward and his men rode one way, they’d see fires burning in the other direction. If they turned towards the destruction, chances were new fires would spring to life behind them. Very frustrating. I imagine Edward took every opportunity offered to call these elusive Scots craven and misbegotten creatures.
The Scots were neither craven or misbegotten. After some weeks of playing the scarlet pimpernel with the English (you know: they seek him here, they seek him there, the Frenchies seek him everywhere. Is he in heaven or is he in hell, that demned elusive pimpernel) Douglas found a nice, strong position and set up camp. He also had one of his English captives released, ordering the man to find Edward and tell him the Scots were waiting to do him battle.
“Yes!” Edward punched the air upon hearing this. His commanders were less delighted, and in particular Mortimer had far too much respect for Douglas to believe Sir James had set himself up as an easy kill. He hadn’t. Douglas had chosen his position carefully. A hill, defended by the river Wear and steep slopes, with Douglas’ colours—three silver stars on a blue background—flapping lazily in the wind. Mortimer groaned inwardly—even more so when Edward started talking about what strategies to use to pulverise the Scots. (As yet another aside, Mortimer and Edward shared a fascination for new technology, so on this campaign they’d brought along some rather primitive versions of the cannon. Ergo the pulverisation above)
“You can’t fight them up that hill,” Mortimer told his young king.
“Of course, I can. But I’ll start by inviting him to come down and meet us on the flat ground, prove he is as brave as they say.”
“He’s brave, not an idiot,” Mortimer probably replied. “What commander worth his salt would give up that position?”
Mortimer was right. Sir James politely declined Edward’s invitation to come down from his hill, and Edward decided it was time to show the Scots just who had the upper hand. He ordered his archers to advance—the English (and Welsh) archers were the best in the world, and as soon as they came within range, they’d fill those dratted Scots with more arrows than a hedgehog has spines. Douglas was fully aware of how deadly the English archers were. He waited until they were wading the river, or making a hesitant approach up the slopes before attacking them. Soon enough, there were dead archers everywhere, making it very clear Edward had no hand at all—not in this game of war poker.
An exhausted and dispirited English army settled down for the night. Weeks of chasing the Scots, of more or less constant rain, of insufficient food, had left Edward’s men weak and grumpy. Their Scottish foes were made of sterner stuff: no sooner had the summer night begun to darken, but the Scots began an all-night party, blowing horns and clashing swords against shields. Impossible to sleep in, so to all their other woes, Edward’s men could now add sleep-deprivation. 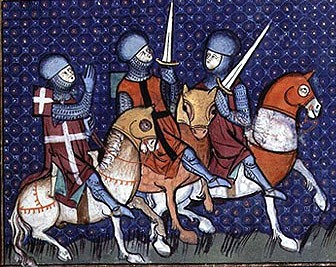 Come morning, a host of pale and shivering men did their best to look intimidating and warlike, all of them probably hoping there wouldn’t be a battle this day. There wasn’t. James stuck to his hill, and come nightfall the Scots repeated last night’s procedure. Blaring horns, steel against steel, and the English tossed and turned, further plagued by the drifting scents of roasted meat.
A couple of nights of this, and then suddenly, just before dawn one night, the Scots went quiet.
“Finally!” the English exclaimed, sinking into blissful oblivion. When they woke, it was to discover Douglas had sneaked off, leading his men to a new position, if possible even more impregnable.
Edward spent some time cursing the Scottish dogs to hell and back. Didn’t help much. He ordered the English army to follow Douglas and set up a new camp.
For a change, that August day was a nice day. No rain, and once the tents had been set up and the fires lit, the English had yet another pleasant surprise: the Scots were obviously too tired to repeat the hullabaloo of the preceding nights, and so the summer night was fragrant and wonderfully silent.
The king and his earls had supper with Mortimer. Plans were drawn up for the next day. Some wine, some good food and they took to their beds—as did the rest of the men. Which is when some of them registered the sound of many horses, approaching at a gallop.
Out of nowhere—or so it seemed—came the Scots. Armed with torches and spears, they charged through the English camp. Some wielded swords to cut the guy ropes, thereby causing the tents to collapse. Others set fire to the tents, or skewered the people trapped within on their spears. Chaos. Fear. Screams. Blood. Smoke.
Like witless hens, the English ran before the Scots. Some emerged with sword in hand and began to fight back. Others died. Quite a lot of others. The Scots thundered on, making for the tent flying the royal colours. Swish, and the guy lines were cut. Like a cut soufflé, the tent fell together, trapping the young king inside. He was helpless, the Scots were only moments away from abducting him, but here came Edward’s men, here came Mortimer, sword aloft, and the Scots backed away. A horn blew. Douglas, calling for help. The horn blew again, and the Scots rode to their lord’s defence. Some moments later, they were gone, leaving a trail of carnage behind them.

Next morning, Douglas and his men had left, riding hard for Scotland. Standing in the shambles of his camp, the young Edward had learnt a valuable lesson: never underestimate your enemy.
Several months later, a treaty with Scotland was concluded, sealed by the marriage of Edward’s little sister, Joan, to Robert the Bruce’s little son, David. Edward didn’t want the treaty. He wanted Scotland. But other than never to underestimate, he had also learnt another lesson: bide your time. So he did. For now.