From where I am sitting on this cold winter day, I can see a stand of snowdrops. Puny little things, giving little reassurance spring is anywhere close. Unfortunately, no matter how I look, I cannot find the pointy narrow green shoots that presage my favourite among spring flowers, the crocus. But seeing as I am desperately longing for spring, I’ve decided a little excursion into the wild and exciting life of the crocus might be just the thing.

Okay, so crocuses have little of excitement in their lives. Up they grow, and once the spring sun is warm enough, they open their faces to the sun, presenting us with a colourful display that ranges from the most pristine of white to the explosive compo of deep purple and bright, bright yellow. After some days, they’re so exhausted by all this show-casing that they wilt. In truth, a brief display of beauty – and not at all exciting.
Crocuses are among the oldest of our flowers. The name must have very ancient roots, and whether in Sanskrit or ancient Hebrew, English, German or Spanish, the flower’s name is very similar. And it was obviously a very appreciated little flower, what with it being mentioned in the Song of Solomon and depicted for posterity in ancient frescoes found in Santorini.
The reason for its popularity was not the modest flower. No, the crocus was precious because of saffron – yet another word that sounds more or less the same in most languages, indicating just how ancient our relationship is with this particular spice. Personally, I prefer azafrán, the Spanish word that still clings to its Arab roots.
Saffron is a very, very expensive spice. One gram costs approximately two pounds (three dollars), and as always when it comes to pricing, this reflects just how restricted the supply is versus the demand. Harvesting saffron must be one of the most labour intensive jobs in the world, and it takes approximately 250 000 flowers to generate 1 kilo of saffron. Why? Because saffron consists of the three stigma a crocus plant produces, bright red lightweight things that look like short treads. 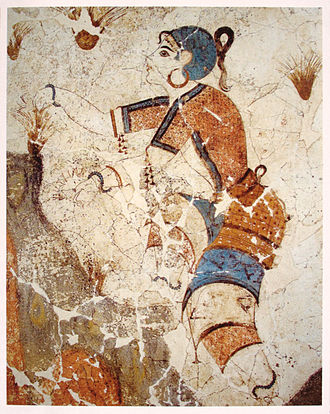 No one really knows where the saffron crocus originated, but as shown in Minoan pottery and frescoes, well over three thousand years ago people were picking the delicate threads. We know the Assyrians held saffron in high regard, as did the Egyptians. After all, saffron is a versatile product, as useful as a spice as in medicine and in colour production. It was also considered an aphrodisiac, and Cleopatra sprinkled her bathwater (or should that be bathmilk? Although as I hear it, it would take a veritable army of donkeys to fill a bath tub with their milk…) with saffron to increase the pleasures of lovemaking. (Which requires yet another parenthesis as we ponder whether this is lovemaking in the bath or after the bath. Well, we will never know, will we?)
In difference to most other crocuses, the saffron crocus flowers in autumn. Bright purple flowers open to capture the rays of the autumn sun for one day, and the pickers must be quick to harvest the stigma – even more so as almost all the crocuses flower within the same week or so. As a word of advice, don’t go around assuming all crocus look-a-likes that flower in autumn are saffron crocuses. Chances are you’re looking at what is called meadow saffron (or naked lady), an entirely different genus to crocuses – and very, very poisonous with no known antidote.
Right: so now you know more than you necessarily feel you need to know about saffron crocuses – except that there is one crucial part missing. You see, the saffron crocus is sterile, so the only way to propagate it is through the corms. This makes it more difficult to cultivate, which of course was great news for whoever already had a nice little saffron plantation going, not so great for those who wanted to enter into competition. A so called high-entry barrier market…

In medieval Europe, saffron was the thing. Even more so as it was disgustingly expensive, a way to shout to the world just how rich you were. Throughout the ages, rich people have shared this little idiosyncrasy, that of having to ascertain everyone else knows just how loaded they are, whether it be by driving Aston Martin DB9’s (yes, please!) or by having a couple of houses more than they need, or buying Crystal champagne by the crate, or, in medieval times, by splurging on saffron. Somehow, saffron consumption seems quite low-key in comparison.
The saffron prices sky-rocketed in the 14th century in the aftermath of the Black Death, as saffron was a recurring ingredient in all the potions and salves produced to ward off the pestilence. A ship loaded with saffron was hi-jacked by a nobleman and triggered a two week war; Venice imported as much saffron as it could find and sold it at exorbitant prices. Being a saffron-pirate was, for a short time, a lucrative profession. In brief, people went a bit wild and crazy.

Now, with such a profitable commodity, many were tempted to cheat – to cut the saffron, so to say, by mixing it with other stuff. This was not approved off. In 15th century Nürnberg, a man was burned at the stake for doing this. Some years later, two men and a woman were buried alive for the same crime. Clearly, tampering with saffron was considered a very bad thing to do.
Even more were tempted to steal some of the precious corms. After all, once you had some, you could relatively quickly (like over 3-5 years) develop bulbs. Obviously, those that had saffron bulbs and corms weren’t about to give them away. What was required was an intrepid and brave undercover agent to somehow infiltrate the crocus fields and dig up the prize. Even more importantly, the corms had to be smuggled out of whatever territory they might be in, as controls were rigorous.
As per legend, the English had one such agent. I have no idea what he might have looked like, but suspect we are looking for a person who blended in well, ergo was rather non-descript and who definitely didn’t make a nuisance of himself by ordering “stirred, not shaken” hippocras. The gentleman in question toddled off to the Holy Land, and I hope he took the opportunity to combine his botanical espionage with some serious pilgrimaging. Some years later, the man returned to England, safe and sound. The pilfered corms were hidden in his walking staff.
Edward III was probably very pleased – finally, England was on the road of self-sufficiency when it came to saffron. His secret agent was dispatched to Essex and an anonymous little place. Over time, this place was renamed as Saffron Walden – no need to explain why, methinks – and for the coming centuries or so, saffron was cultivated in various parts of England, contributing to the relative wealth of the saffron farmers. 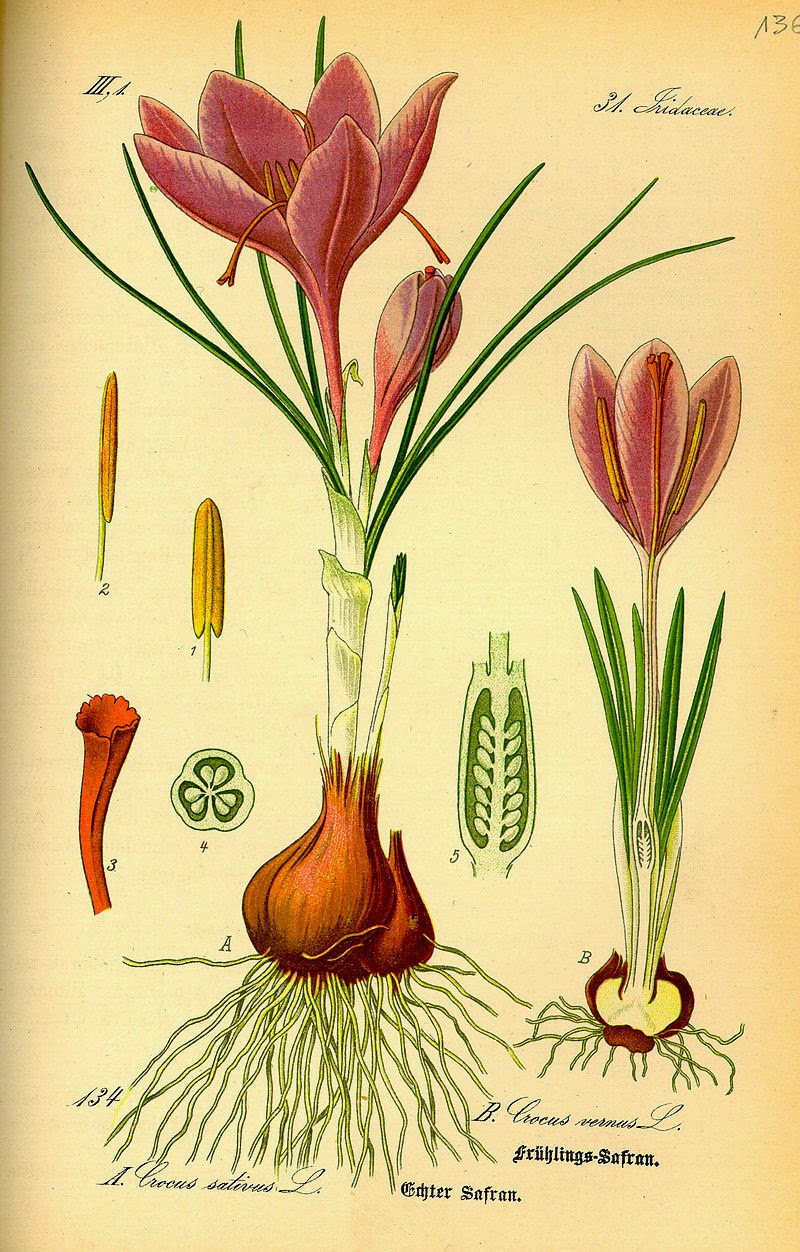 Things rarely remain the same. At the dawn of the Early Modern Age, England was inundated by new spices, new commodities. Tea and coffee, chocolate and spices from the New World – they all supplanted saffron as the next hot thing in cooking. English saffron farmers went out of business, and after several centuries of home-grown saffron, English saffron addicts now had to depend on deliveries from Spain.
These days, Iran is by far the largest producer of saffron. Spain comes in as a steady number two, delivering approximately one ton of saffron per year to the market. That, ladies and gentlemen, is not all that much – not when you’re the world’s second largest producer. I guess it reflects the fact that over time the saffron crocus hasn’t changed. Just as it did in the distant past, it produces only three stigma, precious red threads that have to be harvested by hand. And just as in those long gone times, saffron remains the most precious of spices – well worth it, if you ask me, seeing as I am about to dig into a delicious fish soup, in which saffron and cream combine into a golden, fragrant dish.

3 thoughts on “A priceless treasure – of crocuses and saffron”