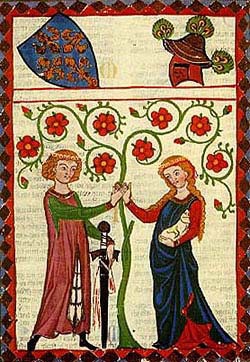 I have a good friend who has a most prosaic approach to life. On one occasion, we were discussing marriage, and my friend causally said that he was convinced a successful marriage had more to do with how you approached it than who you were married to.
“Eh?” I said, somewhat taken aback.
“I’m just saying I could probably have had as good a life with another woman – and you with another man.”
“I love my husband,” I said – rather stiffly.
“And I love my wife.” He smiled slowly. “But I could have loved another wife just as much.”
Well, the conversation degenerated into a heated discussion for a while, but by the time we’d finished our respective tea and coffee, I had to grudgingly admit he was right. There is no single Mr Right or Ms Right for any of us. There are multiple alternatives, and it is how we work with our relationship that will define its long-term viability – however unromantic that sounds.
Of course, most of us prefer to see marriage/relationships as something pink and fluffy. Us modern Western people are suckers for romance and therefore marry for love. Us modern Western people divorce each other when the love runs out – not an option only some generations back. 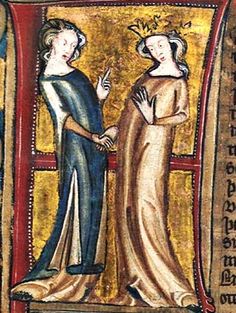 If your expectations of marriage include sizzling passion and everlasting romance you will obviously be disappointed three years into your relationship when hubby clambers into bed with his socks on, mumbles “God, I’m tired” for the eighth night in a row, and turns his back on you. (Contrary to some beliefs, men are just as good as women at complaining about “headaches”) As a modern person who considers love and passion to be a mandatory ingredient in your relationship, chances are you’ll feel seriously short-changed. Chances are you’ll conclude the love is gone and so the relationship is terminated. Onwards and upwards to new, greener pastures… Good luck!
Historically, those new greener pastures were out of reach for most people. And if you belonged to the noble, wealthy classes no one would consider love a relevant aspect when discussing a marriage. Children – both sons and daughters – were useful assets to cement alliances and increase wealth. To us, this all seems very dreary. I am sure it could be, but I am also certain quite a few of these arranged marriages were quite happy. After all, it is all about expectations – and your approach to things.

One example of an arranged marriage that by all accounts developed into a strong, loving relationship is that of Edward I and Eleanor of Castile. They were wed for political reasons – Henry III needed to shore up his Spanish alliance – and no one was all that concerned about the feelings of the fifteen-year-old groom or the thirteen-year-old bride.In this case, the bride and groom took a liking to each other, and over the thirty-six years of their marriage were rarely apart – Eleanor accompanied her husband wherever he went. While fortunate in love, they were less fortunate when it came to their children. Eleanor was brought to bed of fourteen to sixteen children, of which only six reached adulthood, five daughters and one son.
His own happy marriage should have made Edward eager to consider such things as compatibility and potential for future happiness when arranging his daughters’ marriages. Not so much. Like his contemporaries, he used his daughters to create relevant alliances. 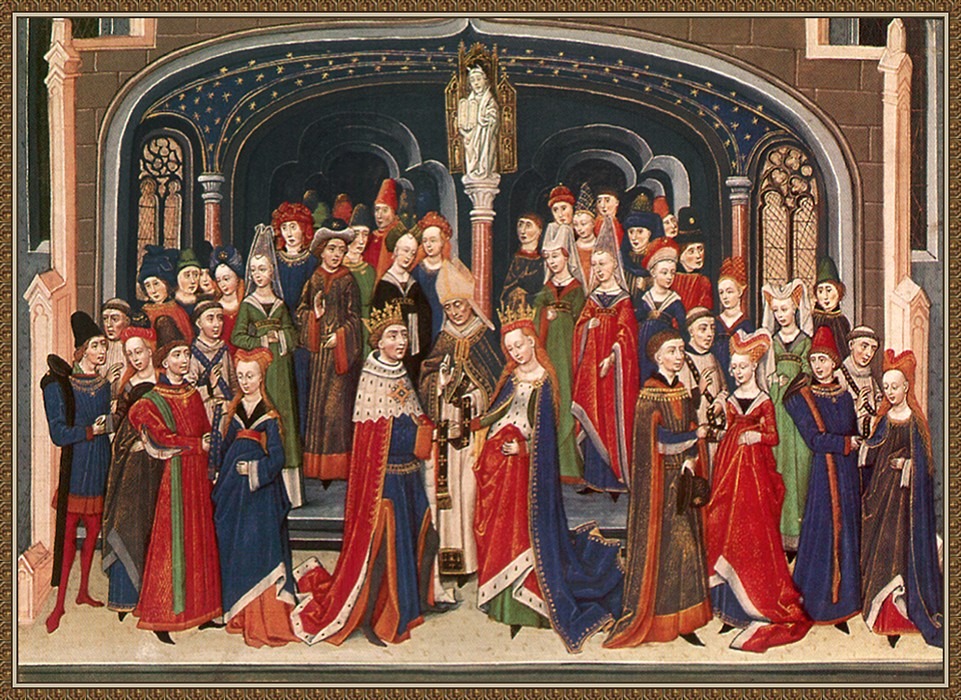 One of his daughters, Joan of Acre, he married off to Gilbert de Clare, earl of Hertford and Gloucester. The earl was one of the richest and most powerful men in England, and Edward hoped to tether him to the throne by wedding him to his daughter. That Gilbert was thirty years older than Joan was neither here nor there – at least not to Edward. What Joan thought of all this we don’t know, but Gilbert seems to have gone to some lengths to woo his young bride.
They were married in 1290 – the bride was eighteen, the groom pushing fifty. Five years and four children later, Gilbert was dead. Joan, however, had done her duty, giving her husband a precious son and heir as their firstborn.
One would have thought Edward would give his daughter a break: recently widowed and with four young children, maybe she could be allowed to find her second spouse on her own. Edward did not agree. Joan was still young and obviously fertile, which made her even more of a marital asset. Edward cast a beady eye over the prospective suitors and nodded approvingly at one Amadeus, Count of Savoy, a man more than twenty years Joan’s senior.

Joan, however, had other ideas. A year or so after her husband died, she found herself attracted to a certain Ralph de Monthermer. Ralph was no great catch, he’d been one of Gilbert de Clare’s squires and had no major future prospects. But he was only two years older than Joan, young and fit, and I dare say she preferred the idea of wedding him to being sent off to please Amadeus of Savoy. Besides, it didn’t matter that Ralph was poor. Under the marital contracts drawn up between Gilbert de Clare and Joan, Joan was more than well off, Countess of Hertford and Gloucester for life.
Edward, unaware of his daughter’s infatuation with strapping Ralph, continued with his negotiations. A marriage date was tentatively set for March of 1297. Somewhat desperate, Joan decided to preempt her father, and after convincing him to knight Ralph, she married her newly-belted knight in secret. (No matter how in love, it seems Joan had certain standards: her husband had to be at least a knight. At least) 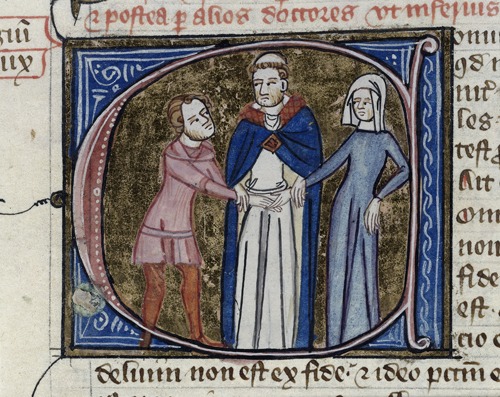 To marry without the king’s approval was not wise. To marry without the king’s approval when said king was presently negotiating your marriage with someone else was more along the lines of crazy. I guess Joan felt she had no choice. What Ralph felt I had no idea, but there must have been moments when his guts tied themselves into knots. Edward I was not exactly known for his mild temperament.
Meanwhile, Amadeus expressed he was more than happy to wed Joan and Edward was thrilled at how the negotiations were proceeding, so I imagine he decided to inform his daughter that soon enough she’d be the new countess of Savoy.
“Umm,” said Joan, “thing is, I can’t marry him.”
“Don’t be silly, of course you can. You’ll take to your new country like a fish to water.”
“Err…Well…Papa dearest, promise you won’t be mad, but…umm…I’m already married.”
Explosion. Major, major explosion. It probably did not go as far as having Edward frothing at the mouth (so undignified!), but I dare say his droopy eyelid twitched like mad. In his rage, Edward stripped Joan of her lands and threw poor Ralph into Bristol Castle. This beautiful love story seemed headed towards a tragic ending – not that Edward cared. On top of having to deal with his rebellious daughter, he suffered the humiliation of having to apologise to Amadeus. The Count of Savoy, however, was not one to dwell on lost opportunities and I am happy to say he found another bride within some months. Whether the bride was as thrilled I have no idea, being yet another of those young girls of impeccable lineage married to a man decades her senior.
Fortunately for Ralph and Joan, Edward calmed down. Besides, Joan was already pregnant, and several people urged him to be lenient. So in August of 1297 Ralph was released from Bristol Castle and reunited with his happy wife, by then big with child.
Joan and Ralph went on to have four children together. The relationship with Edward I was never to rise above lukewarm, but Ralph proved himself capable and loyal, qualities Edward valued. There is, however, a little anecdote regarding Ralph that I do not thing Edward would have appreciated: it is said that in 1306, while Robert de Bruce was at the English court, Edward planned to arrest the Scotsman. Ralph overheard something and chose to warn Robert by sending him 12 silver pennies and a set of spurs (and it is dead obvious that this means “Flee! Ride like the devil for home!”) Robert set off at speed, which is why he was around to crush the English at Bannockburn in 1314. Somehow, this little story has Ralph climbing high in my affections – and Robert obviously agreed, seeing as when Ralph was captured at Bannockburn he was invited to dine with Robert before being released with no demand for ransom.
Back to our heroine of the day: In 1307, Joan died, not yet thirty-five. Ralph would go on to marry again, this time the sister of a certain up-and-coming Hugh Despenser, Isabel. Interestingly enough, this was also a clandestine marriage. Yet again, Ralph would be on the receiving end of a king’s anger for wedding without royal permission, but seeing as this king was Edward II, I dare say his displeasure was easier to bear. 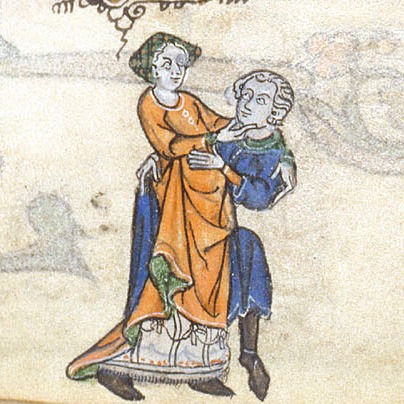 Joan’s son with Gilbert de Clare died young at Bannockburn. Her sons by Ralph were not exactly long-lived either. And as to Joan’s many daughters, they would, just like their mother, be married off as it best suited the interest of their relatives – in this case the English king. In difference to their mother, none of them would contract a second marriage based on such an irrelevant aspect as love. Poor them.

14 thoughts on “Pulling the wool over Papa's eyes”