Today I am more than happy to be hosting a stop on The Coffee Pot Book Club’s blog tour for Traitor’s Knot by Cryssa Bazos. I read this book some years ago, and I am happy to report that while Ms Bazos is relaunching the book under a new cover, the content remains unchanged. Fortunate, that, as Ms Bazos gives us quite the exciting tale, set against the first few years of the Commonwealth. Not a happy time for England: the Civil War was supposedly over, the young king and his royalist followers had fled into exile, and the Parlamentarian faction was tightening its hold on the country. Ms Bazos delivers an excellent, action-driven story (with a lovely love story) set against an impressively vivid historical setting. Definitely a highly recommended read! 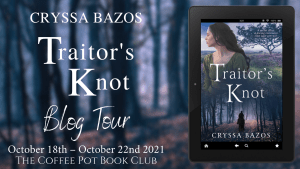 Excerpt
From nowhere, a racing black horse flashed past her window, the rider passing close to the carriage. Startled, Elizabeth craned her head, wondering at his reckless pace. Without warning, the coach veered off the road and pulled up, throwing her onto the floor. The others shrieked and braced themselves. They heard panicked shouts from the driver and the deep, jarring voice from another.
“Stand and deliver!”

Elizabeth heard the measured clopping of a single horse drawing close and the nervous shifting of their team. She crept to regain her seat. Mistress Pritchett shook with terror, and Elizabeth reached out her hand to reassure her.
“One inch more and your brains will lie in a pool at your feet.” They heard the click of a cocked pistol.
Elizabeth froze, fearful that he spoke to her. But with his next words, she knew that he still dealt with their driver.
“Toss your musket over the side.”
“You’ll have no trouble.” The driver’s voice cracked, and the carriage swayed and creaked as he scrambled down from the top seat.
“Everyone out!”
Elizabeth followed the Pritchetts, nearly stumbling on her skirts. Her foot found the first step and froze. A pair of pistols trained upon her, unwavering and baleful. Slate-grey eyes burned with equal intensity above a black scarf. Although every instinct screamed retreat, Elizabeth descended the coach.

The highwayman rode a large black horse with a white blaze on its forehead. He commanded the powerful animal by his slightest touch, moving like one, rider and horse, fluid and instinctive. The highwayman wore all black from his heavy cloak to his mud-splattered boots.
“Richard Crawford-Bowes.” The highwayman’s voice cut through the stunned silence. “Step forward. I would fain make your acquaintance.”
Sir Richard did not twitch.
Provoked by the absence of a response, he pointed his pistol at Sir Richard’s stubborn head. “Mark this well—I never repeat myself.”
“I am he,” he said and stepped forward.

The highwayman circled Sir Richard with the imposing horse. “This is a unique pleasure, my lord. Are you beating the countryside looking for desperate souls to fill your court, or have you reached your quota?”
“Now listen here,” Sir Richard sputtered. “If you persist in this venture, I vow to bring you before the assizes and see you hang!”
The highwayman shrugged. “You deserve nothing more than to share the same fate as the honest men you rob in the name of your Commonwealth. Strange idea that—common wealth. As though the wealth stolen from the King would ever be given to the common man. Deliver your coin or die.”

Sir Richard’s brow darkened. From his pocket, he withdrew a handful of shillings.
A shot fired. Elizabeth jumped and smothered a scream, pressing her hand to her mouth. Shouts and shrieks erupted from the people around her. The highwayman lowered his smoking pistol. Sir Richard remained standing, a foot back from where he had been and pale as chalk.
“My patience is nearing an end,” the brigand said levelling his other pistol. He tucked the spent one in his belt and replaced it with a primed carbine. “A few pieces of silver. I’m sure you have more than thirty.”
Colour returned to Sir Richard, and his thin mouth pressed into a resentful line. “You will regret this.” He drew a larger pouch from his cloak and took a step forward, but the rogue’s next words stopped him.
“Take one more step and it will be your last. I care little for the honour of judges and trust their intent even less. Hand the purse to someone else.” His flinty gaze passed over the huddled couple and singled out Elizabeth. “Come forward, mistress. You’re neither fainting nor quivering.”

Startled, she considered pleading to be left alone but smothered the impulse. She would not show fear to this villain. Taking a deep breath, Elizabeth walked towards Sir Richard. A sheen of sweat beaded his forehead, and his Adam’s apple bobbed in this throat. She held out her hand and tried to keep it from trembling. Her nape prickled as if the pistol pressed against her skin. Sir Richard clutched the purse, glaring at her as though she was the villain.
“Your purse, my lord,” she whispered. “Please.”
Sir Richard hesitated for another moment before shoving it into her hands.
Greedy wretch. Elizabeth’s annoyance with Sir Richard gave her the courage to walk up to the brigand. With every step, her determination grew. She would be quite happy to hand over Sir Richard’s money.

The rogue motioned her to give him the pouch, and when she dropped it into his outstretched hand, she met his direct gaze. Elizabeth expected to see the cold eyes of a ruthless madman, but to her surprise, she did not. There was a hardness in those grey depths, but also a keen, calculating intelligence that heightened her curiosity. He stared back at her boldly, and she could not look away.
“My thanks.” His tone was an unmistakable dismissal.
Elizabeth stood puzzled. Old Nick’s small purse rested under her cloak, the sum of everything she owned. She would have been sick over parting with it but wondered why the highwayman had made no demands on her or the others.
“Was there anything more, mistress?”

She was about to shake her head and back away, but the muffled weeping behind her ended thoughts of retreat. Having reached the end of her endurance, Mistress Pritchett began to cry, soft at first and then with more violence. She would have collapsed to the ground had her husband not supported her. Elizabeth grew outraged for the hysterical woman. The audacity of the scoundrel, with all that he dared, awakened her. “Pray, what is your name, sir, so that we may know the coward who threatens us behind a scarf?” 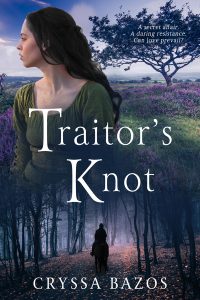 Royalist officer James Hart refuses to accept the tyranny of the new government after the execution of King Charles I, and to raise funds for the restoration of the king’s son, he takes to the road as a highwayman.

Elizabeth Seton has long been shunned for being a traitor’s daughter. In the midst of the new order, she risks her life by sheltering fugitives from Parliament in a garrison town. But her attempts to rebuild her life are threatened, first by her own sense of injustice, then by falling in love with an outlaw.

The lovers’ loyalty is tested through war, defeat and separation. James must fight his way back to the woman he loves, while Elizabeth will do anything to save him, even if it means sacrificing herself. 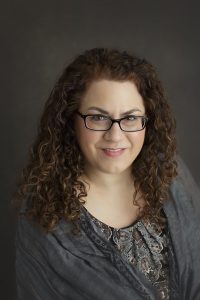 Author Bio: Cryssa Bazos is an award-winning historical fiction author and a seventeenth century enthusiast. Her debut novel, Traitor’s Knot is the Medalist winner of the 2017 New Apple Award for Historical Fiction, a finalist for the 2018 EPIC eBook Awards for Historical Romance. Her second novel, Severed Knot, is a B.R.A.G Medallion Honoree and a finalist for the 2019 Chaucer Award. A forthcoming third book in the standalone series, Rebel’s Knot, will be released November 2021. 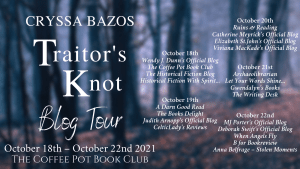