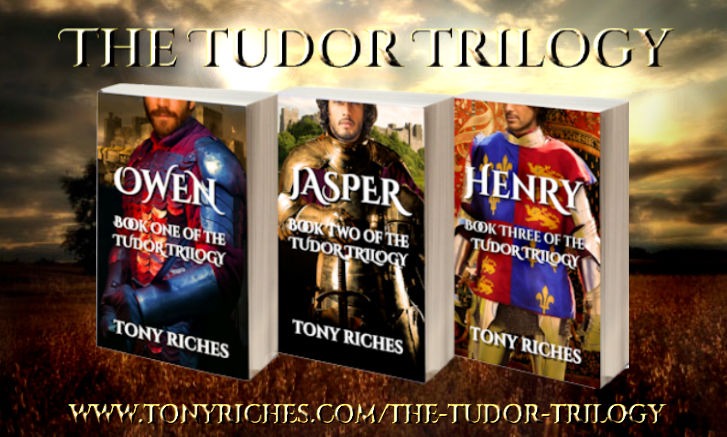 The original idea for writing the Tudor Trilogy came to me when I began looking into the life of Owen Tudor, the Welsh servant who married a queen, and was surprised to find there were no books offering a full picture of his adventures. I soon found out why, as it is so hard to track down reliable information about his life. There are no images of him and even his name is written by scribes as ‘Owen Tidder’ or ‘Owain Tetyr’ and was probably Owain ap Maredudd ap Tewdwror).
I began to collect fascinating details of the lives of Owen’s sons, Edmund and Jasper and realised that if I planned it as a trilogy, Henry Tudor would be born in the first book, come of age in the second and become King of England in the final book.
The research for the first book, OWEN, consisted mostly of reading about the well documented life of his wife, Queen Catherine of Valois. Although I had to piece together the details of Owen’s life by cross-checking different sources and ‘fill in the gaps’ from other records of the period.
Owen’s first son Edmund died from wounds or a form of bubonic plague while in prison in November 1456, barely two months before Margaret Beaufort gave birth to Henry in Pembroke Castle. I visited the scene of Edmund’s death at Carmarthen Castle and found only the gatehouse remains, as the castle was largely demolished to build a Victorian Prison.

Fortunately, Edmund’s tomb was rescued from Carmarthen Priory during the dissolution, so I was able to visit it at St David’s Cathedral, although even there it wasn’t safe. Stripped of its finery by Oliver Cromwell’s army in the seventeenth century, the tomb was restored in 1873 with an engraved brass representing Edmund Tudor by Thomas Waller.
It was left to Edmund’s younger brother to continue the story of the Tudors in the second book of the trilogy, JASPER. Now my research became easier, as he was based at Pembroke Castle (in the town where I was born) and owned a house in Tenby, close to where I now live.

Supporters of King Edward IV forced Jasper and the young Henry Tudor to flee for their lives. The secret tunnel they used to reach the harbour still exists, so I was able to see it for myself and walk in their footsteps deep under the streets of Tenby.
I’ve sailed from Tenby harbour many times, including at night, so have a good understanding of how they might have felt as they slipped away to Brittany. Rather than follow their course around Land’s End I chose to sail on the car ferry from Portsmouth to St Malo in Brittany, where I began to retrace the Tudor’s time in exile.

I’ve read that little happened during those fourteen years but of course Brittany was where Henry would come of age and begin to plan his return. Starting at the impressive palace of Duke Francis of Brittany in Vannes, I followed the Tudors to the Château de Suscinio on the coast. I was amazed to find it has been restored to look much as it might have when Jasper and Henry were there, and the surrounding countryside and coastline is largely unchanged.

Duke Francis of Brittany, began to worry when Yorkist agents began plotting to capture the Tudors, so he moved them to different fortresses further inland. I stayed by the river within sight of the magnificent Château de Josselin, were Jasper was effectively held prisoner. Although the inside has been updated over the years, the tower where Jasper lived survives and I was even able to identify Tudor period houses in the medieval town which he would have seen from his window.

Henry’s château was harder to find but worth the effort. The Forteresse de Largoët is deep in the forest outside of the town of Elven. His custodian, Marshall of Brittany, Jean IV, Lord of Rieux and Rochefort, had two sons of similar age to Henry and it is thought they continued their education together. Proof I was at the right place was in the useful leaflet in English which confirmed that: ‘On the second floor of the Dungeon Tower and to the left is found a small vaulted room where the Count of Richemont was imprisoned for 18 months (1474-1475).’
Entering the Dungeon Tower through a dark corridor, I regretted not bringing a torch, as the high stairway is lit only by the small window openings. Interestingly, the lower level is octagonal, with the second hexagonal and the rest square. Cautiously feeling my way up the staircase I was walking in the footsteps of the young Henry Tudor, who would also have steadied himself by placing his hand against the cold stone walls, nearly five and a half centuries before
When I returned to Wales I made the journey to remote Mill Bay, where Henry and Jasper landed with their small invasion fleet. A bronze plaque records the event and it was easy to imagine how they might have felt as they began the long march to confront King Richard at Bosworth. On the anniversary of the battle I walked across Bosworth field and watched hundreds of re-enactors recreate the battle, complete with cavalry and cannon fire.

The challenge I faced for the final book of the trilogy, HENRY, was too much information. Henry left a wealth of detailed records, often initialling every line in his ledgers, which still survive. At the same time, I had to deal with the contradictions, myths and legends that cloud interpretation of the facts. I decided the only way was to immerse myself in Henry’s world and explore events as they might have appeared from his point of view. I stood in the small room in Pembroke Castle where Henry Tudor is thought to have been born, (within sight of where I was born) and began three years of intensive research about this enigmatic king.
I bought every book I could find about Henry and his times, and also studied the lives of those around him, including his mother, Margaret Beaufort, and his queen, Elizabeth of York. As I reached the end I decided to visit Henry’s Tomb in Westminster Abbey. There is something quite surreal about making your way through Westminster Abbey to the Lady Chapel at the far end. There are many amazing distractions, as you pass the tombs of earlier kings and Henry’s granddaughter Elizabeth I in a side chapel. Henry’s tomb dominates the centre of the Lady Chapel and is surrounded by a high bronze grille. His effigy is raised too high to see, so I climbed a convenient step and peered through the holes in the grille. There lay Henry with his wife, Elizabeth of York, their gilded hands clasped in prayer.
I am pleased to say that after all these years researching the lives of the early Tudors, all three books of the trilogy have become international best sellers. I’d like to take this opportunity to thank all the readers around the world who have been on this journey with me. Although this is the end of the Tudor trilogy, I am now researching the life of Henry’s daughter Mary and her adventurous husband Charles Brandon, so the story of the Tudors is far from over.
****************************
Thank you, Tony for that. And I for one am happy to hear you’ll be writing more books – especially about someone as fascinating as the wayward Mary and her Charles! 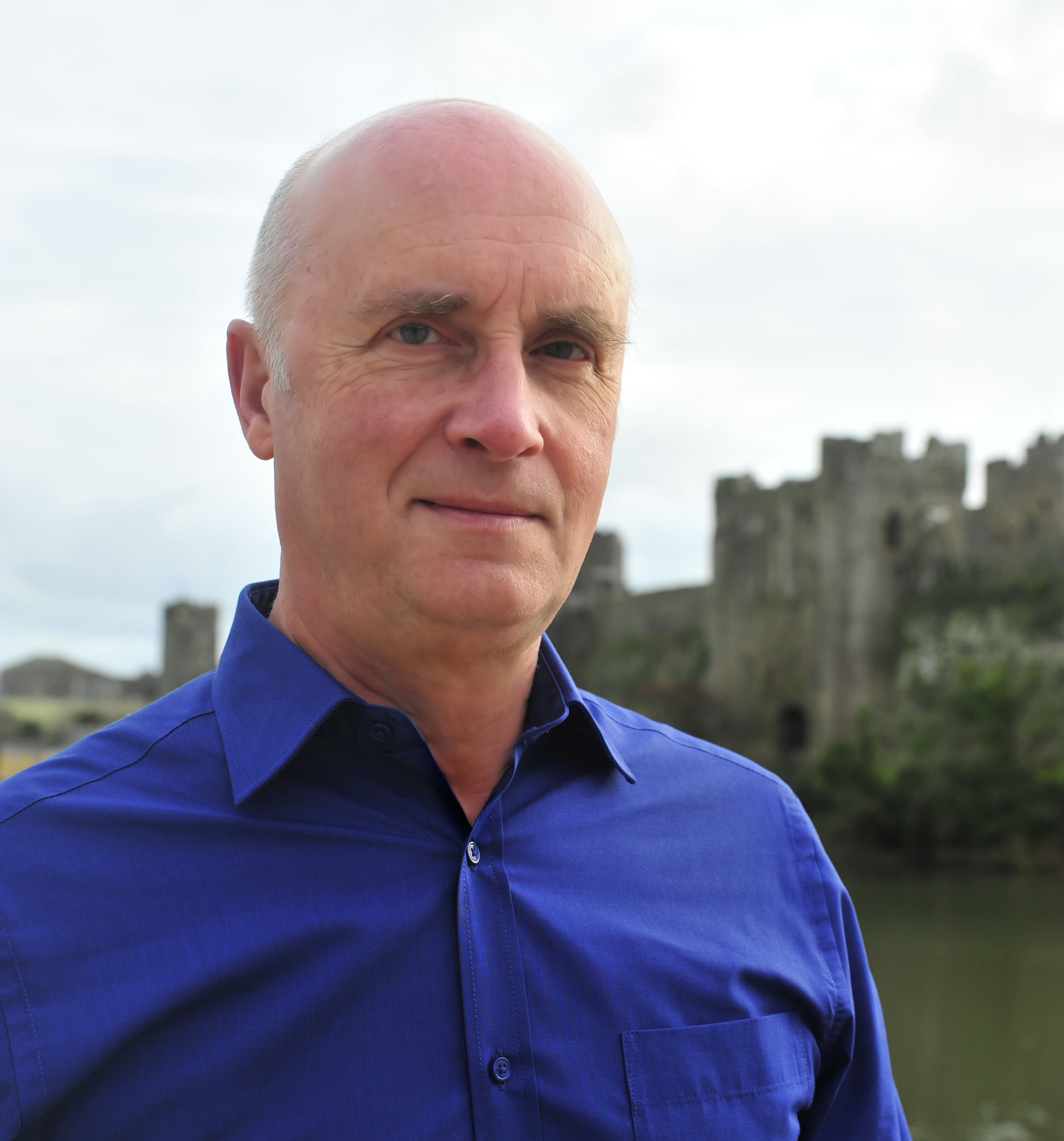 For those of you as yet unacquainted with Tony Riches, he is a full time author of best-selling fiction and non-fiction books. He lives by the sea in Pembrokeshire, West Wales with his wife and enjoys sea and river kayaking in his spare time. For more information about Tony’s other books please visit his popular blog, The Writing Desk and website www.tonyriches.com and find him on Facebook and Twitter @tonyriches.  The Tudor Trilogy is available on Amazon UK  Amazon US and Amazon AU

1 thought on “Researching the Tudors – either there's too much, or too little!”