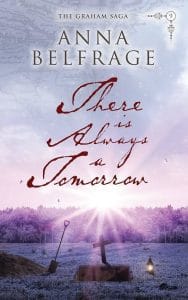 There is Always a Tomorrow

It is 1692 and the Colony of Maryland is still adapting to the consequences of Coode’s Rebellion some years previously. Religious tolerance in the colony is now a thing of the past, but safe in their home, Alex and Matthew Graham have no reason to suspect they will become embroiled in the ongoing religious conflicts—until one of their sons betrays their friend Carlos Muñoz to the authorities.

Matthew Graham does not leave his friends to rot—not even if they’re papist priests—so soon enough most of the Graham family is involved in a rescue attempt, desperate to save Carlos from a sentence that may well kill him.

Meanwhile, in London little Rachel is going through hell. In a matter of months she loses everything, even her surname, as apparently her father is not Master Cooke but one Jacob Graham. Not that her paternity matters when her entire life implodes.

Will Alex and Matthew be able to help their unknown grandchild? More importantly, will Rachel want their help?

Buy There is Always a Tomorrow

Quite a few LOVELY reviews!

Before the second sleep

A chick who reads

Read the first three chapters!
Excerpt There is Always a Tomorrow (1-3) (327KB)