Today, I am happy to welcome Harry Duffin and his upcoming release Island of Dreams to my blog as part of his Coffee Pot Book Club tour. Mr Duffin’s book is set in Cuba, and for many many peeps it was, in fact an island of dreams and future hopes, welcoming people desiring to start anew from all over the world with open arms. This, obviously, was before Batista. Or Castro. Mr Duffin’s book starts a couple of decades prior to the events that left Fidel Castro in charge – more precisely in 1939, when many people saw no choice but to leave their homes in Germany and flee. 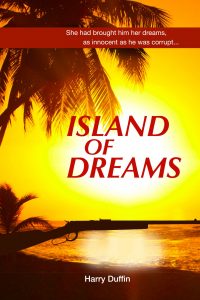 In May 1939, when Professor Carl Mueller, his wife, Esther, and their three children flee Nazi Germany, and find refuge on the paradise island of Cuba, they are all full of hopes and dreams for a safe and happy future. But those dreams are shattered when Carl and Esther are confronted by a ghost from their past, and old betrayals return to haunt them.

The turbulent years of political corruption leading to Batista’s dictatorship, forces the older children to take very different paths to pursue their own dangerous dreams. And – among the chaos and the conflict that finally leads to Castro’s revolution and victory in 1959, an unlikely love begins to grow – a love that threatens the whole family.

Having escaped a war-torn Europe, their Island of Dreams is to tear them apart forever.

If her last client didn’t leave too late Conchita often came to sleep beside Freddie. Not for the sex, though that occasional act with him seemed to cleanse the bad thoughts she sometimes had about her work. He had saved her life years ago and, always, sleeping beside him she felt safe. But an American frigate had docked the day before and Conchita and another girl had gone with its officers to an all-night party at the Hotel Sevilla. So, Freddie had slept alone that night.

The S.S. St Louis remained besieged in the harbour.  That was frustrating for two reasons. With no passengers allowed to leave, Freddie’s dreams of easy money had faded, while at the same time its presence brought unwelcome memories to the surface.

It was ten years almost to the day since he had last seen the Mueller’s. He thought with irony that it was their anniversary. A celebration of the horrendous parting that had left him at first in tears for weeks, and then inside a bottle ever since. He knew it was self-indulgent and weak to blame others for one’s own downfall, but when drunk Freddie cultivated that side of his nature, and fuelled it with bitterness over his ruined career. He preferred that state to his guilt and regret when sober.

Strangely for him, he had woken very early and was brewing a pot of rich black coffee when he saw the young policeman arrive and enter the building down below. There were footsteps on the stair and moments later a knock on the door. Freddie crossed the tiny room to open it. Though they had a deserved reputation for casual brutality, the police didn’t alarm him.

The man was holding a brown paper packet which he held out to Freddie.

Freddie gazed at the package transfixed.

Freddie felt as if he had been electrocuted. For a moment he thought he must be still dreaming. He’d been having nightmares all weekend.

After a moment Freddie reached out and took the package. It felt real. But dreams always did.

‘The other doctor paid me.’

After the policeman had left, Freddie closed the door and locked it, an unusual precaution for him. He gazed at the package for a long time, until the coffee burnt in the saucepan.

As he held the scalded pan beneath the cold water, he continued to stare at the package which, though small, seemed to fill the entire room.

It was too incredible that the Mueller’s were actually on the marooned ship. At first, he thought he had misheard.  But the policeman had described Carl exactly. Tall, thin, distinguished, but now with thick greying hair, not the jet black he had known. Was the rest of the family with him? Being half-Jewish perhaps they’d not been one of the lucky ones allowed to leave? But Carl would never desert his family, not even if it meant his own life. No. They were on the boat. Only a couple of hundred metres across the water, Esther Mueller was there.

Freddie lit another cigarette, sucked the poisonous smoke deep into his lungs and exhaled long and slowly. At last, he picked up the package and turned it over in his hands. Something soft, and something long, thin and hard. With fingers he couldn’t stop trembling, Freddie tore open the packet.

The note inside was brief, but unmistakably from his old tutor. Slowly he unwrapped the thin roll of tissue paper and revealed its contents. Freddie felt a terrible weight descend on him and crush his chest like a vice. His heart pounded insanely. The man who ten years ago had banished him from his life and ruined his prospects of a fine career, was now begging him to save his family. Just as Carl Mueller once held Freddie’s future in his hands, now the Mueller’s fate was in his, in the form of a sparkling diamond necklace.

Ooooo! That was quite intriguing! Will Freddie go with revenge or compassion, one wonders…

At present, there is no buy link for this book, but it will be published in December and will be available on Amazon and KU. 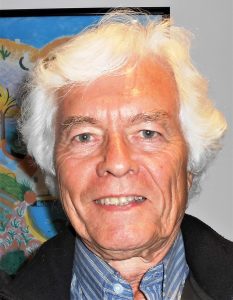 Harry Duffin is an award-winning British screenwriter, who was on the first writing team of the BBC’s ‘Eastenders’ and won the Writers’ Guild Award for Best TV serial for ‘Coronation Street’.He was Head of Development at Cloud 9 Screen Entertainment Group, producing seven major television series, including ‘Swiss Family Robinson’ starring Richard ‘John Boy’ Thomas, and ‘Twist in the Tale’, featuring William Shatner.

He was the co-creator of the UK Channel Five teen-cult drama series ‘The Tribe’, which ran for five series.

He has written three novels, Chicago May, Birth of the Mall Rats [an intro to the TV series ‘The Tribe’], and Island of Dreams, which will be published in December 2022.

Chicago May is the first book of a two-part series: www.chicagomay.com 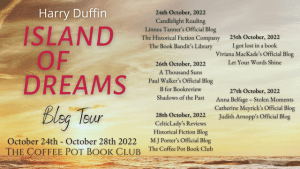