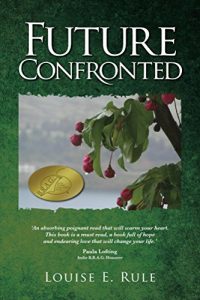 Louise and I have been virtual friends for close to ten years. We’va actually met IRL as well, several years back, but these last few years our contact has become increasingly sporadic, for various reasons. Several years ago, I read Louise’s book Future Confronted, which is a deeply personal and harrowing read about losing a child. I remember thinking that some people have life throwing gigantic spanners at them, and since that book, Louise has had her fair share of more ginormous spanners.

I admire grit. I admire the passion that has had Louise deep-diving into everything from masonry work to gaelic. (I especially admire the gaelic. Dratted difficult language, with little guide to pronounciation in how it is written) So when I heard that Louise had finally finished her book, it was my deepest pleasure to invite her over to talk a bit about her latest baby. With that, over to you, Louise!

Thank you, Anna, for inviting me to talk about my new book, The Touching of Stones, which is set in Scotland in the late thirteenth century. 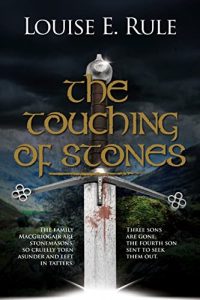 Back in 2013, after publishing my first book, Future Confronted, on Amazon, I decided it was time to get started on the book which had been simmering in my imagination for quite some while. The Touching of Stones was that book, although I didn’t have a title for it back then. All I knew was that it needed to be one of a series about the lead up to the Scottish Wars of Independence. This is a point in history which grabbed me when I was at school. We had learned the potted version, as you do, but that was enough to ignite the pilot light which continues to glow for Scotland, her eclectic history, and her tenacious defenders, her people.

I started with a What if? What if King Alexander III didn’t fall over the cliff to his death during a dark and stormy night? What if he was assassinated? If so, by whose hand, and why? Stories begin in the author’s imagination with a What if? So, it’s that what if? which became the germ from which grew, The Touching of Stones.

The place is on the outskirts of Arbroath, where the MacGriogairs are stonemasons. Their lives are derailed when a French stonemason arrives, asking for work. He stays for a time, and while he’s working, he tells stories of his travels, and how he had worked in the cathedrals of France. 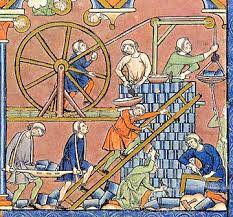 Iain, the eldest son, listens with an open mind. He would like to travel one day, but his father can’t work as he once had. His hands are crippled working the stone, so Iain feels he must stay. Nychol, an impressionable but talented younger son, is drawn in by the stories. He is impatient to travel to France, and his parents think he should stay put. Nychol is disheartened, and when the Frenchman leaves, Nychol holds on to the stories, which strengthens his desire to go to France. He is eager to learn new techniques, and just to be among other stonemasons, learning from them and to revel in their own stories.

His father won’t agree to him leaving, so Nychol decides to leave anyway, and steals off in the dead of night, in severe weather. This creates animosity between his mother and father, but Nychol is gone, and his mother is worried he may never return. Nychol gets captured by soldiers, and pressed into service for the MacRaibeirt fermtoun, and Nychol’s journey takes on a whole new direction.

Iain’s and Nychol’s younger brothers, Artair and Sìm, are unhappy at home. They have no time for each other or their brothers or three sisters. Artair wants to leave because he has no intention of being a stonemason. His desires lie elsewhere. He dreams of being a soldier, of becoming a hero.

Sìm? Well, he wants to leave because he sees himself as different from his entire family. They all have red hair; he has brown hair with thick, tight curls. They have a pale skin which burns easily in the sun, while he is the colour of nutshells. His eyes are also different. The whole family is blue-eyed, while his eyes are odd. The one eye is blue, the other brown. He wonders where he comes from, for surely, he doesn’t belong to this family.

Artair meets a man who cajoles him to do his bidding with the promise of becoming a soldier. Just what Artair has always wanted and sees this as is his chance to do what he wants. Sìm, on the other hand, decides to leave the family that he feels uneasy living amongst. Now the MacGriogair family is split asunder, and surely only tragedy can follow.

(Anna: Sim sounds intriguing! And I look forward to understanding how this family of masons end up involved in the potential murder of a king. Now back to Louise!)

I’m not Scottish, but I am attached to Scotland in a familial way. My maternal grandmother was born in Lanarkshire in 1893. My mother’s family visited often from London, always travelling on the sleeper train, which used to sound very romantic to me. Scotland is also where my mother met my father, who was a policeman, lodging at my great aunt Jessie’s lodging house in Glasgow.

Bizarrely, my family never visited Scotland together. But one day my mother’s cousin Agnes, as broad a Scot as ever I had heard, visited us. Her accent drifted across the room like music. There was a lilt to it, a joy to it, and I was hooked at a mere twelve years of age. The only thing that I, at that time, could not find joy in was the bagpipes. It was like fingernails scratching on a blackboard. However, I find them more enjoyable now. I’m not sure when the transition happened, but I’m glad that it did.

With my love for Scotland, and a yearning to write about the Scottish War of Independence, I started my research burrowing down a myriad of rabbit holes, one after the other. Research is addictive, truly, and eventually I had the idea that my story would be set in both the Highlands and the Lowlands.

I made several trips to Edinburgh to research the castle, the city, listen to the accent. In fact, one day, armed with my phone set to record, I decided to just sit in a café on the Royal Mile, switch it on, and listen. The first group to come into the café were Chinese, or maybe they were Japanese, I’m not certain, and it made me smile. I should have realised what a cosmopolitan place Edinburgh is having visitors from all over the world. Retelling this story to my husband made him laugh. All that way to record Chinese/Japanese people talking. Still, I did get some good recordings, eventually. The Edinburgh accent is soft, friendly, welcoming.
I also visited Stirling Castle, which has a clear sightline to the William Wallace Monument, absolutely amazing. I also visited Bannockburn. I took copious photos and notes as the guide spoke about the battle of Bannockburn and I began to jot down ideas.

Looking up at the statue of Robert the Bruce astride his trusty steed gave me the chills. He and his horse look so fierce. The visitor centre has an array of helms, longbows, mail vests and some claymores. I was challenged, first to try to lift the helm from the table, but could only drag it to the edge, and to lift the claymore. It had its point resting on the floor, with me holding the pommel. I was then tasked with lifting it vertically until it pointed to the ceiling. Okay, I tried, I really did, but when I had it a mere quarter of the way off the floor, I had to give in. It weighs about 2.5kg. It doesn’t sound a lot, but at that angle it seems to triple its weight. I was told that it was to do with the angle, and to remember that a knight would be much stronger than I, having to wield this sword while wearing his helm, which weighed about 1.8kg, and a complete suite of plate armour weighing somewhere between 15 – 25kg. Imagine how strong you would have to be to wear all that and fighting, too. The horse would be a destrier, which, I was told by the guide, is a medieval military term for a warhorse. Can you imagine the sight? The thud of the hooves as the horse charged, the rider ready to fight; it must have been as impressive as it was terrifying.

There was one thing that kept pecking at my mind throughout my research, though. The Gaelic language. This was a new arm of research, and in the end, I decided that the only way to go was to try to get some knowledge of it, at least. Yet another rabbit hole. You guessed it; I began learning it. I adore languages, but learning Gaelic has been the hardest, most challenging language I have ever tried to learn. I won’t give up because it’s enjoyable, and when I realised that I could understand Gaelic when spoken, well, it gave me the spur to carry on learning.

ALBA, on Scottish Television, has a great resource for learning Gaelic, and thanks to BBC’s iPlayer, it’s always there. I’ve also been learning from Jason Bond, a guy on YouTube. He lives in Maine, USA, but used to teach Gaelic at the Sabhal Mòr Ostaig (Great Barn of Ostaig) on The Isle of Skye for several years. Their website is http://www.smo.uhi.ac.uk/ if you are interested in finding out more.

Jason Bond’s way of teaching is the same as you would learn your own language as a child. You listen, you understand, you repeat, you eventually have a conversation, and he teaches the grammar as you need it. He also offers private tuition, but I haven’t yet done that. I have found that using the resources on ALBA in tandem with Jason Bond works well for me.

Thank you again, Anna, for this opportunity to chat about my new book, The Touching of Stones. I am now working on book two, and I am so excited.

2 thoughts on “With perseverance comes results – meet Louise Rule and her latest book!”