Today, I have the pleasure of hosting a stop on Ms Kampen’s blog tour for her recent release The Brantford Wagers. Ms Kampen has set her story in the perennially popular Regency period, and speaking for myself, I love escaping into a well-written historical romance. Besides, the young Ms Vincent sounds like an intriguing and forceful female. 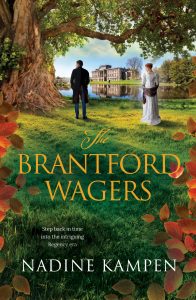 Is Clara Vincent ready to risk it all for love? Clara Vincent is “the artful dodger” when it comes to marriage, especially when her father is bent on match-making. Will her attitude change when she meets two eligible suitors and is drawn into the lives of intensely competitive families? Clara falls unexpectedly in love, but when fortunes are reversed and relationships up-ended, she needs to decide whether to trust James Brantford, who is seeking retribution, or accept the love of the man everyone else believes is her ideal match.

As the Brantford wagers unfold and lay bare the history of past relationships, will Clara be able to learn the truth and finally follow her heart?

The Stancrofts’ cousin Clara had not the good fortune of an easy journey from Wells. A wheel on the carriage broke off during a bad stretch of road, and Clara and Old Perry were forced to arrange for repairs in a small village along the route. With no carriages available for hire, Clara purchased a ticket to ride in the mail coach with Old Perry accompanying her on horseback, her mare tethered at his side.
‘Your father will be upset when he learns you are riding coach,’ said Old Perry nervously.
Clara patted Old Perry on the arm and smiled cheerfully at him.
The road to the next town, though a toll route, was full of holes and ruts. Even with short breaks while the horses were changed, Clara still spent the better part of the day bracing as the coach lurched its way along.

The two travellers gained some rest that evening, sleeping at an inn and appreciating a light breakfast. Once underway the next morning, they had not been travelling long when light rain gave way to a storm system and heavy winds. The coach was moving over a stretch of rough road, laden with heavy luggage and extra passengers on the roof, when the storm began. Clara winced at the repeated cracks of thunder, and there was a sudden heave in the coach as the frightened horses bolted, running out of control. Clara gasped as the coach swayed precariously. She expected the coach to tip at any moment as it swerved wildly along the narrow road.
Old Perry, letting Clara’s horse loose, caught up to the carriage and helped slow down the team. With the team stopped at last, the coachman jumped to the ground to check on his passengers and inspect the luggage. Clara swung the carriage door open and stepped out. She looked around anxiously to see how the boys on top of the carriage were doing.
‘Lads, are you injured?’ she called out. She moved out of the way while the boys climbed down, helping a smaller lad. The young boy had hurt his wrist and was no longer able to hold on to the railing but was otherwise not seriously hurt. Some pieces of luggage had flown off the carriage and the driver was collecting and re-strapping them onto the back of the coach. The other passengers agreed with Clara that the injured boy should travel inside with them.
‘Mr Perry!’ she called out, going around the carriage to find him. She could see him talking to someone in the distance. A stranger had dismounted from his own horse and was holding the reins to Clara’s mare. She could see there was a carriage stopped further back, with a team of horses standing quietly in the rain. It was then that she realised that both men were inspecting her horse’s leg. Alerting the driver of the coach, she hurried towards them.
Quick to assess the situation, she asked, ‘Was she hit by some luggage?’
His hat pulled down to block the heavy rain, the gentleman looked up briefly and nodded, continuing to examine the horse while the woman moved alongside the older man. A small wooden crate pitched from the mail coach had clipped the horse in the leg. Fortunately, the gentleman was travelling with his own carriage, which was equipped with ointments for his horses. He applied a salve and continued examining the lower leg. Clara felt confident, by the simple fact that Old Perry allowed the man near her mare, that he knew what he was doing. Her horse, given its lively temperament, remained surprisingly calm. It seemed comforted, either by the skill of the men or the stillness of the large horse beside it.
‘The cut is not too bad,’ said Old Perry, ‘but there is deep bruising as well.’
Clara stood quietly, watching and listening while the men attended to her horse.
‘My dear, please, go back to the carriage,’ urged Old Perry. ‘You are getting soaked.’
She stubbornly remained where she was, and the other man, tying his scarf tightly around the horse’s knee, finally said, ‘Miss, we are almost done. At least take some shelter.’
Clara moved under some nearby trees. In a few minutes, Old Perry came over to see her. They discussed the matter and made their plans.
‘We have a few options. I can take her to the next village, or the man helping us said he could take the horse to his place, which is near to Middlegate. He says there is also a decent stable in the town behind us, which is closer, with a fellow there who is supposedly good with horses.’In
easy agreement when it came to care of their horses, Clara consented to Old Perry’s preferred plan and he, unhappily, agreed to hers. She would travel on to Middlegate alone. From there, the journey into Finstead was an easy distance and she would make her own arrangements. He would go back to the town behind them and send word to her.

Clara thanked the stranger for his help. He briefly tipped his hat in acknowledgement, then turned to speak again with Old Perry. The driver called out to Clara, and with a few last words and another quick thank you, she returned to the carriage. Back inside, she pulled her wet cloak tightly to her body, and waved at Old Perry through the coach window, trying to catch a final glimpse of her mare.
With water seeping into the coach, Clara used her cloak to wipe away the droplets. The boy with the injured wrist sat at her feet, leaned into her, and was soon asleep. Despite feeling chilled, she arrived in Middlegate surprisingly none the worse from her travels. At the age of five and twenty, Clara Vincent’s joints did not ache, nor did her knees buckle when she claimed the steady ground. She looked, in fact, as though she had been refreshed by the journey. 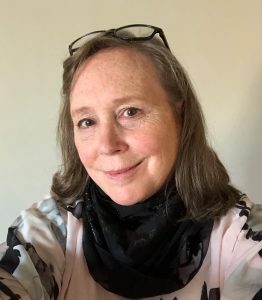 Author Bio: In her début novel, The Brantford Wagers, Nadine Kampen draws on her passion for stories that bring a smile and warm the hearts of the reader. The author immerses the reader in the fictional world of traditional historical romance, set in the memorable Regency England period, sharing the hopes, schemes, and antics of her characters.

Prior to her career as an author, Nadine served as a regional marketing manager with an international consulting firm and as a communications and marketing director on university campuses. Earlier in her career, she worked in public relations and journalism, and was co-author and project lead for five non-fiction books comprising The Canadian Breast Cancer Series, published in 1989.

A resident of Winnipeg in Manitoba, Canada, Nadine loves relaxing with family and friends, reading and walking, playing tunes on her 1905 Bell piano, and gardening. 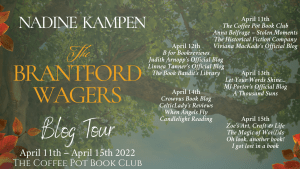