It seems to me various of my writer friends are spreading their wings into new genres. Today’s guest, Helen Hollick, is doing it because she felt a need to refresh herself, do something entirely different to what she’s been writing lately. And while I am a big, big, big, big (need I go on?) fan of pirate Jesamiah Acorne and his adventures in the 18th century, I fully understand why Helen enjoys writing something different. It sort of shapens the mind,  while actually relaxing the soul. Diving into a new genre is a way to remind yourself of why you write – mostly for your own sake 🙂

Thank you, Anna. I must begin by saying, for readers who are anxious to know, that I haven’t abandoned my pirate, Captain Jesamiah Acorne, or the Sea Witch Voyages (Anna: YAY!!!!), but during the weird year that was 2020, with lockdown, Covid worries and such, I found I couldn’t concentrate enough to write the next in the series. I wanted to do something different, something lighter and fun… not that writing about Jesamiah isn’t enjoyable, or that a murder can be described as ‘light’ or ‘fun’!

By coincidence, a couple of years ago when I met up with Alison Morton for an author ‘get-together’ in Bristol, we both mentioned that we were wondering about trying our hand at the ‘murder mystery’ genre. Ideas are all very well, but you need a plot, a story, characters (goodies and baddies), location, period setting…research… and time to write it! 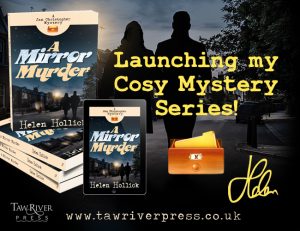 At the back of my mind I was also mulling over how I could make use of the decade or so of experience that I had gained while working from 1969-1982 as a library assistant in my, then, home town of Chingford, north London. All those garnered anecdotes – some of which are hilarious… but I must add, I have no experience of murders or police crime! I gain my knowledge through reading other authors’ books. (And Endeavour and Heartbeat on TV is useful for the 1970s!) And then those lightbulb-moment ideas expand: ‘What if I..?’  Followed by the characters tumbling in, almost as if they have been waiting outside a shop waiting for the sales to start – the door is opened and in they rush: ‘Hello Jan! Hello Laurie, hello DCI Christopher!’

I had the plot, the story – I even knew ‘whodunit’! (Anna: always a good starting point when writing a mystery, I would imagine 🙂)

One thing I did find difficult was getting the facts right. 1971 seems only yesterday but it’s actually fifty years ago! No computers back then, no internet, no mobile phones. I lived with my parents, we had one telephone in the front hall (and even that was a shared party line), one black and white TV. When I left school us girls were expected to be shop assistants, hairdressers, typists or housewives and mothers – not meaning any disrespect to these, but at the lower level of Secondary School education, we were not thought bright enough to consider anything even remotely intellectual.

Like me, in A Mirror Murder Jan Christopher knew that she wanted to write, but her ‘I want to be a writer’ was scorned by the teachers because she couldn’t type. (True story, that bit!) A library assistant was regarded as one of the more elite jobs. Even so the librarian was always addressed as ‘Mr’, never by his first name. Equality was only on the brim back then, and if you were shy and naïve – like I was – well, you didn’t question anything, just did, or accepted it.

Jan, my main character (her full name is January, but she only uses ‘Jan’) is a little bit like I was at eighteen, shy, not worldy-wise, but I wanted to give her more opportunities than I had, bring out her confidence, her conviction in herself. All helped, of course by DC Laurie Walker who becomes her boyfriend.

I also thoroughly enjoyed writing a little bit of fictional revenge into my story. One of the librarians at a library where I was sent ‘on relief’ to cover for staff who were absent, was a horrid bully. I hated going there, he always picked on me. Well, I’ve got my own back in A Mirror Murder – I’ve made him experience the displeasure of the Chingford CID! But ssh, no spoilers… 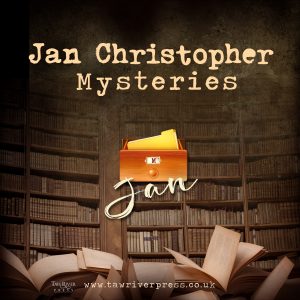 DC Laurie Walker, who looks a little like a young Cary Grant, is entirely made up, I suppose the nearest to real life would be that my first boyfriend’s dad was a policeman! But will romance develop between Jan and Laurie? Or will Laurie’s police work – especially when murder is involved – end their relationship? Ah well, you’ll have to wait for Book Two A Mystery Of Murder to find out (but read A Mirror Murder first!) 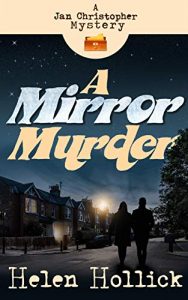 The first in a new series of cosy mysteries set in the 1970s… Will romance blossom between library assistant Jan Christopher and DC Laurie Walker – or will a brutal murder intervene?

Eighteen-year-old library assistant Jan Christopher’s life is to change on a rainy Friday evening in July 1971, when her legal guardian and uncle, DCI Toby Christopher, gives her a lift home after work. Driving the car, is her uncle’s new Detective Constable, Laurie Walker – and it is love at first sight for the young couple.

But romance is soon to take a back seat when a baby boy is taken from his pram,  a naked man is scaring young ladies in nearby Epping Forest, and an elderly lady is found, brutally murdered… Are the events related? How will they affect the staff and public of the local library where Jan works – and will a blossoming romance survive a police investigation into  murder?

Anna: Does that sound interesting or what? Well, I certainly thought so, which is why I’ve bought and read the book. And no, there’s not a pirate in sight, but somehow, I got over it, as evidenced by my review:

January Christopher wants to be a writer, but her teachers at school more or less laugh her out of the room when she expresses as much, saying that it is quite, quite impossible as dear January (Jan, she hisses, I call myself Jan) can’t even type. Already here, Ms Hollick presents us with quite the window into a world not much more than half a century distant, but so very different from ours—especially if you were a girl.

Jan navigates a world with constraints, many of them imposed on her because of her gender, but she is fortunate in her aunt and uncle and, to some extent, in her job as library assistant. In her free time she writes, but her days she spends at the beck and call of the rather unlikeable head librarian. (Who, to my delight, gets his comeuppance in a rather entertaining manner)

And then one of the more regular visitors to the library is found dead, apparently killed by the shattered mirror found beside her. Through a series of events Jan is suddenly indirectly involved in a murder investigation, together with her uncle, DCI Christopher, and his new sidekick, the rather handsome Laurie Walker.

The hesitant relationship between Jan and Laurie is beautifully depicted, without going all sugary-sweet. After all, Jan may not know how to type, but she is a sensible and intelligent young woman who may yearn for love and romance but who stays true to herself. It is very easy to like Jan—and Laurie—and to be somewhat touched by their innocence.

Ms Hollick set out to write a cosy mystery, and she has achieved just that, a not too convoluted story featuring characters it is easy to like and relate to. Reading A Mirror Murder is a bit like putting on a favourite jumper when it is cold outside, leaving you quite warm—and cosy—inside. 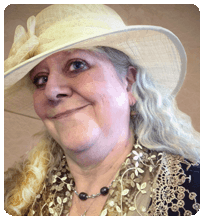 Helen and her family moved from north-east London in January 2013 after finding an eighteenth-century North Devon farmhouse through BBC TV’s popular Escape To The Country show.

First accepted for publication by William Heinemann in 1993 – a week after her fortieth birthday – Helen then became a USA Today Bestseller with her historical novel, The Forever Queen (titled A Hollow Crown in the UK) with the sequel, Harold the King (US: I Am The Chosen King) being novels that explore the events that led to the Battle of Hastings in 1066. Her Pendragon’s Banner Trilogy is a fifth-century version of the Arthurian legend, and she also writes a pirate-based nautical adventure/fantasy series, The Sea Witch Voyages.

Her non-fiction books are Pirates: Truth and Tales and Life of A Smuggler. She also runs Discovering Diamonds, a review blog for historical fiction. She is currently writing more Voyages for the Sea Witch series and the next in the Jan Christopher Mysteries series. She has other ideas for other tales – and would like the time to write them!