I find it very improbable that there has ever been a little boy who looked up from his morning porridge and told his proud parents that when he grew up, he wanted to be an executioner. Nor do I think any parent would have been overly thrilled had their beloved son expressed such a desire. Being an executioner has never been a career choice to endear you to your neighbours or family. While our ancestors may have liked to witness a good hanging or two, they were wary of bonding with the man responsible for this gruesome entertainment. After all, someday it could be them on the receiving end of the brutal justice dispensed by the executioner. It didn’t take much to be condemned to death in the good old days—steal a horse and you’d swing.

If you visit the Old Town of Stockholm, you can find a narrow little street called Priest’s Street. It ambles through the truly old parts of Stockholm and was named for the fact that several of the city’s priests lived on it. The northern end of this street, however, had an entirely different nickname: Hell’s Alley. Why? Well, among other reasons because this was where the city executioner lived and NO ONE wanted to live nearby. Somewhat ironic, that the same street started off in heaven and ended in hell… Being the city executioner in medieval Stockholm had more downsides than upsides. Usually, the executioner was someone condemned to die who’d been granted the mercy of staying alive as long as he faithfully executed ( ? )his office. Just to make sure this upgraded ex-con didn’t run off, he had both his ears cut off and was branded with the city mark. Not exactly fringe benefits to aspire to…

However, not all countries had as brutal an approach to the executioner. In many places, the office came with lodgings and a good salary and besides, someone had to do the dirty deed, right? Very often, the job passed from father to son. This was the case with Richard Brandon, the Common Hangman in London in the 1640s. His father, Gregory Brandon, had been the hangman before him, and had somehow managed to acquire a coat of arms to go with his name and chosen profession. Clearly, Gregory did not walk about without his ears, no, he was proud of his profession and does not come across as a cuddly person. At one point he was even accused of murder but wiggled out of that tight spot by claiming benefit of clergy. This, of course, makes one wonder how he could do that – were executioners also priests?

Rumour had it that Gregory was the grandson of Charles Brandon, the dazzling Duke of Suffolk who was Henry VIIIs BFF. The duke had sired an illegitimate son who purportedly was Gregory’s father, but the timing is wrong, as Brandon’s illegitimate son died well before Gregory was born. Still, Gregory Brandon had no reason to refute the rumour. Being descended from someone as well-known as Charles Brandon was not exactly bad for business and added a certain flair to Gregory’s (probably rather dull) ancestral tree.

Gregory was kept busy during James I’s reign. And once he retired, he passed the baton to his son. Did Richard dream of another life? No idea. Maybe wielding a head axe appealed to him. Supposedly he spent his childhood practising his axe-work on stray cats and dogs, and as his father grew older, Richard helped him with his duties, thereby perfecting his noose-tying skills. But it was the axe that was Richard’s favourite implement, and so good was his eye, so steady his arm, that most of the people he executed had their head severed by the first blow. Something to be grateful for, I suppose.

By 1639, Richard had replaced his father as Common Hangman. The first few years of his tenure were marred by an accusation of bigamy, and for a while Richard lingered in Newgate before being released and allowed to return home to Whitechapel and his wife Mary. (Whether she was his “real” wife or the one for which he was accused of bigamy is unclear) 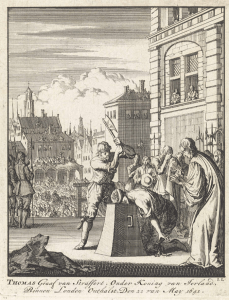 In 1641 our Richard stepped into the limelight when he executed Thomas Wentworth, Earl of Strafford. Thomas was a loyal servant of the king whom Charles I abandoned when parliament turned against him. The king could have refused to sign the death sentence—but he didn’t. To be fair to Charles, he had a very volatile situation on his hands, and it didn’t help that the bishops were divided on the issue, some urging the king to refuse to sign, others insisting he should. Still, Wentworth’s death for being loyal to his king would weigh heavily on Charles’ conscience. As it should.

Soon enough, that volatile situation escalated into full-blown civil war and the coming years were turbulent. People died in the battlefield, of wounds and injuries. Some died because of their crimes, and if they were sentenced in London, it is likely Richard did the killing—oops, execution.

In January of 1645, Brandon added another famous scalp to his belt when he executed the Archbishop of Canterbury, William Laud. I have little time for Laud, whom I consider to have fanned the flames of religious intolerance and thereby contributed to the outbreak of the English Civil War, but beheading an infirm old man seems a bit harsh. In Laud’s case, Charles I issued a royal pardon, but by then Charles’ word carried little weight in England.

In January of 1649, Charles I himself was tried for treason by Parliament. Charles refused to plead, insisting that the so-called court had no right to try their king. Those in charge disagreed and on January 29, 59 men, now commonly known as the Regicides, signed Charles’ death sentence. It was time to call in the services of Richard Brandon, and this time he’d be spilling royal blood.

Brandon refused to kill the king. “No, no, no!” he might have said, backing away from the Parliamentarian officers.  This did not help. The company of troopers dispatched to fetch him did just that, and on January 30 a disguised Richard Brandon was standing on the scaffold, wearing a false beard and periwig. He had to wait a long time for the king to appear, as Parliament was rushing through an Ordinance making it treason to claim the throne after Charles I was dead. Finally, the legalese was done and Charles was ordered to present himself on the scaffold which had been erected beside the Banqueting House. The king, famously wearing two shirts so as not to shiver, was calm and collected. He spoke his piece, kneeled, and at his signal the axe came down. A perfect blow, it severed the king’s head neatly. 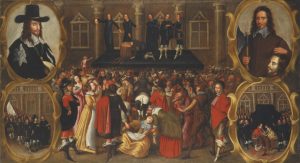 An hour or so later, Richard was back home in Whitechapel, 30 pounds richer. He had also received one of the king’s handkerchiefs in recognition of his services. And an orange, studded with cloves, which he sold for ten shillings. Richard kept his head down. Bragging about being the one who chopped off the king’s head was not the smart thing to do, not when so many were appalled by the deed. Besides, Richard was not proud of what he’d done. Rather the reverse.

In March of 1649, Richard did some more axe work. This time, he dispatched the Earl of Holland, the Duke of Hamilton and Lord Capel with the same axe that had ended the king’s life. But he was not his usual self and complained of headaches, saying he’d been afflicted by relentless pain ever since that day in January. Richard Brandon, Common Hangman and axeman extraordinaire, dispatcher of cats, dogs and who knows how many unfortunate souls, was plagued by guilt for his part in the king’s death. Or maybe he was worried about the consequences for his immortal soul: spilling the blood of an anointed monarch was likely unforgivable —or so he purportedly told the person to whom he confessed that he had executed the king, some days before his death. 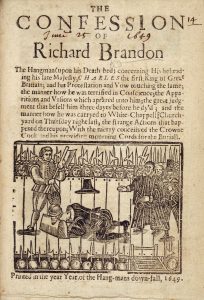 Richard died in June of 1649. Prior to expiring, he admitted he’d been the executioner wielding the axe when Charles died. Not that the identity of the man who’d severed the royal head was a secret: various pamphlets circulated naming Brandon as the man on the scaffold. Some time after his death, a note was added to the burial register, identifying “R Brandon out of Rosemary Lane” as the man who lopped off the king’s head. However, royalist propaganda spread a different story, stating the common hangman had refused to do the foul deed, thereby obliging two troopers to handle the axe themselves.  Nothing points to this being the truth.  Instead, Richard Brandon, accused bigamist and proud inheritor of his father’s job as London’s hangman, is the likely candidate for the man who brought down the blade that so expertly ended Charles Stuart’s life.