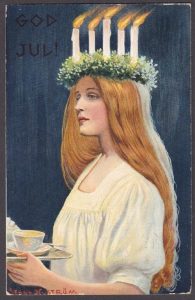 St Lucy’s Day – or St Lucia as we say here in Sweden—is a celebration of light when winter is at its darkest. Prior to adopting the Gregorian calendar back in the 18th century, the Swedish calendar had St Lucia falling on the darkest day of the year, the midwinter solstice, and…What? You’ve never heard of the Swedish calendar? Allow me to clarify:

Back in the really good old days, most European countries used the Julian calendar. This calendar was developed back in Roman times (and yes, it is named after Julius Caesar, which shows just how old it was) and had on average 366 days per year. Problem with that is that the year isn’t 366 days long, it is 365,25 days long, and over time, the drift between the Julian calendar and reality became noticeable—well, it was noticeable four times a year: at the equinoxes (when day and night are the exact same length – they occur once in spring, once in autumn) and at the solstices. During the 16 centuries or so that the Julian calendar was the only one in use up here in Europe the drift amounted to roughly nine days. Obviously, we couldn’t continue working with such a defective calendar—or so the powers that were thought. Which is why, in the late sixteenth century the Holy Church presented the world with a new calendar, the Gregorian calendar, named after pope Gregory XIII.

Now, the reason why adjusting the calendar was so important to the Church was that Easter is a holiday that is calculated based on the equinox (Easter always falls on the first Sunday after the first full moon after the vernal equinox) Already the Venerable Bede noted that the calculation of Easter based on the calendar resulted in an error as the equinox according to the calendar did not correspond to the real equinox. Back when dear old Bede was alive, the difference was only three days, but still: for those who wanted to celebrate Easter correctly, this was a major issue—and an issue that grew over time. 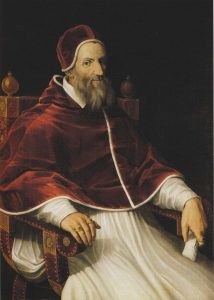 In 1582, Pope Gregory ordered the new calendar implemented. This was done in October, with the 4th of October followed seamlessly by the 15th of October. I am guessing this was VERY confusing for everyone responsible for dating documents and such. Things were to become even more confusing, as most Catholic countries embraced the new calendar already in 1582. So France, Spain, Portugal and the Holy Roman Empire leapt ten days ahead in one fell swoop. The rest of Europe went “hmmmm” and dithered. For Protestant countries to adopt a popish calendar was something of an issue—especially as Europe was embroiled in the bitter counter-Reformation, with various wars ongoing between Catholics and Protestants. Things weren’t going to get better: after the defenestration in Prague in 1619, the Thirty Years’ War would engulf most of Europe.

Thing is, no matter how much it irked the non-Catholics to admit it, the new calendar was better—starting with the fact that it was more exact, which, if one thinks about it, is something one sort of wants a calendar to be. Still: the Protestant countries stubbornly clung to the Julian calendar for well over a hundred years more. Present day Germany, Switzerland, Denmark and Norway switched in 1700. And Sweden went one up: they implemented their own calendar in 1699. *sigh*

Okay, so Sweden wasn’t trying to invent its own calendar. Instead, those in charge of calendars and other important matters in Sweden had hit upon the brilliant idea of gradually moving into the Gregorian calendar. How? Well, the new Swedish calendar had no leap years and was to be in use between 1699 and 1740 at which point it would have become aligned with the Gregorian calendar and everyone would have been happy.

It didn’t work. Yes, the 1704 leap year was skipped, but then the Great Northern War broke out and our oh so bellicose and famous king, Karl XII (and no, I am not a fan, as you can gather by reading this post) decided that there was no time to go faffing about with a new calendar so he promptly reverted to using the Julian calendar. Great. Everyone was confused big time, but at least they could continue celebrating St Lucia on the darkest day of the year as December 13th in the early 18th century according to the Julian calendar was more or less spot on with the midwinter solstice.

And after this deep-dive into calendars, we are now back to talking about St Lucia. Don’t you just love it, how I go all circular on you?

Ask any Swede to name you a couple of saints and chances are they will all say St Lucia. Whether they will be able to name all that many more is doubtful. St Birgitta, St Olof and maybe St Knut may crop up in the conversation as may St Franciscus. In general, though, Swedish people don’t know much about saints. Or God. We are among the least devout people in the world, our religious exposure restricted to visiting church on the first Sunday of Advent, once during Christmas, and perhaps—perhaps—at Easter.

Despite our agnostic outlook on life, Swedes love St Lucia. All Swedish children have at some point in their life dressed in white and entered a dark room in procession with a lit candle in their hand offering the only illumination. High voices have sung about the dark that surrounds us, about a ray of light that promises a brighter tomorrow and a return of sun and warmth to our dark, dark corner of the world. 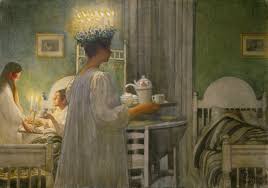 Where the girls don white long chemises, girdled by red ribbons or glittering tinsel, the boys wear long night-shirts and elongated caps decorated by stars. They sing of the guiding star, of the miracle in Bethlehem and leading the whole procession is the Lucia herself, adorned with a crown of burning candles (and it hurts something awful when the hot wax drips onto your head, but hey, you’ve been chosen as the Lucia, so you smile and bear it)

So why St Lucia? And why up here, in a Protestant country so far from Lucia’s birthplace, Sicily?

As to why up here, well I suppose we must remember that Sweden was a Catholic country for several centuries before it became Protestant. St Lucia was a popular saint in many places – her day was often the kick-off of the Christmas festivities and our long-gone ancestors liked festivities as much as we do.

As to why St Lucia, she is the patron saint of the blind, of those that stumble through darkness. That sort of fits, in a country that has so many months of short, short days. Our saint was born around 280 A.D. in Sicily and grew up in a society where Christianity was forbidden and the deity to adore was the Emperor of Rome. Lucia was having none of that. She found Jesus when very young and drove her family to distraction by refusing to marry their chosen groom—because he was not a Christian. She then went on to refuse to pay lip-service to the Emperor, insisted that there was only one God and he was not the person represented by the marble bust she was expected to offer a sacrifice or two. The Sicilian governor tried everything to make her acquiesce, including the anything-but-nice threat to have his soldiers rape her into obedience. Turns out God did have his hand over Lucia, because when the soldiers approached to drag her off to have their “fun” they couldn’t budge her.

The governor had had it with this stubborn woman. He ordered wood to be stacked around her so that she could be burned alive. Didn’t work, which was when the governor  ordered her eyes poked out and then had her killed with a sword. This did work, strangely enough…If you want a longer and more vivacious description of the impressively stubborn and daring Lucia, her worm of a greedy bridegroom and the obnoxious Paschasius, governor of Sicily, I suggest you go here. 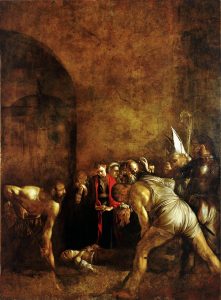 Anyway: there was Lucia, dead and bloody with no eyes. But God decided she couldn’t go into the afterlife without her eyes, so they were miraculously restored to her. Not that it helped Lucia much—she was still as dead as a door-post—but having her eyes restored to her like that made her the obvious saint to put in charge of all those who have lost their sight. It also made her the obvious saint to venerate when it is so dark outside one can’t see the hand in front of you, which is why the fathers of the Church decided St Lucia was a December saint.

Today is St Lucia’s day. And whether we are talking Gregorian of Julian calendar, I am (not) happy to report it is very, very dark out here in the north. But wait: in the distance I can hear singing, and isn’t that the wavering light of a candle coming my way? St Lucia is here, peeps. She is here, bringing words of comfort and joy to those of us stuck in the midwinter night. 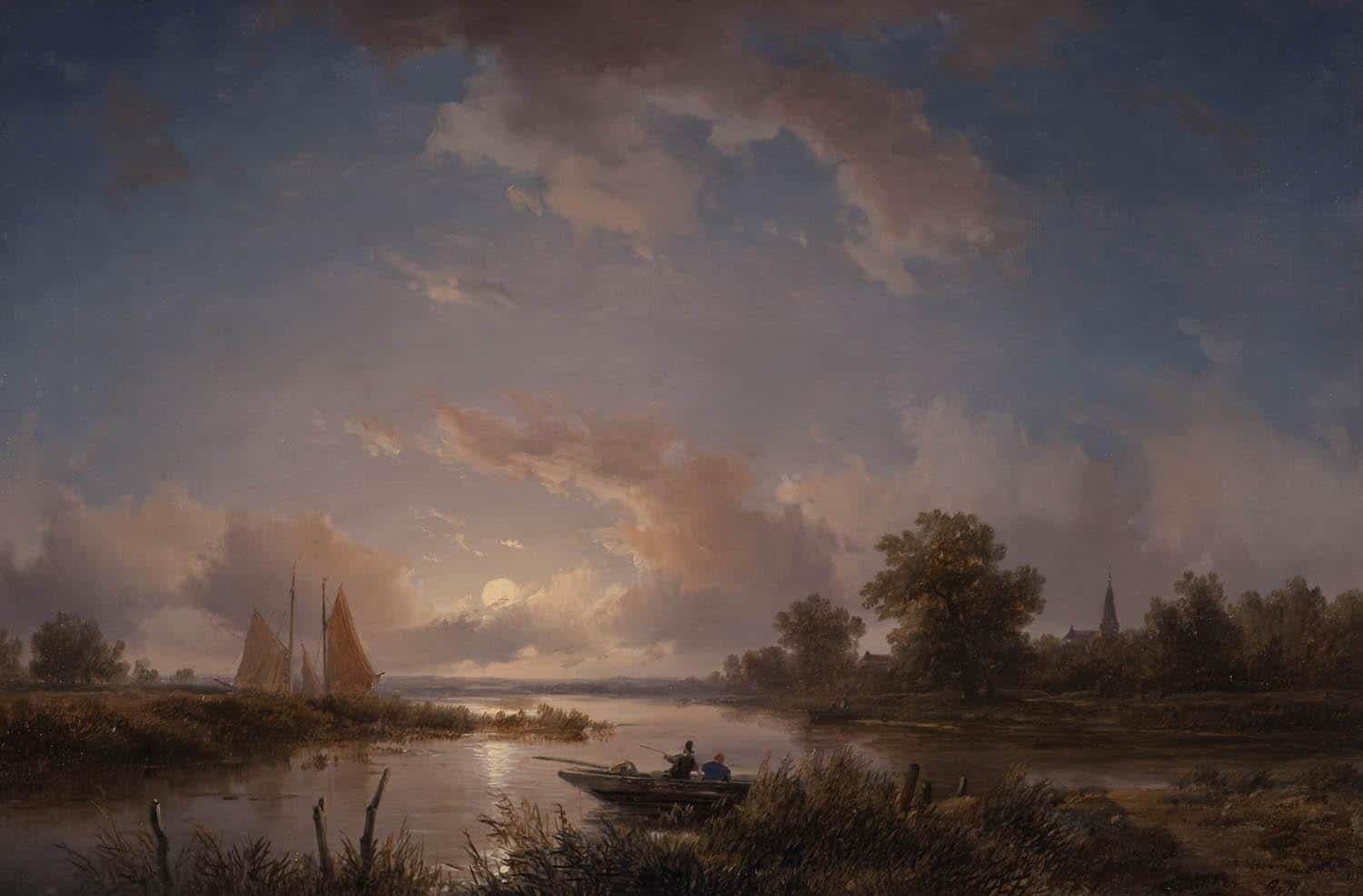 “See?” she says, pointing to the east. “Dawn is coming, soon the skies will glow in pink with the returning sun.” She is right: after night comes day, after winter comes spring. It did so when Julius Caesar developed the Julian calendar. It did so when poor St Lucia was martyred. It did so when pope Gregory XIII ordered that a new calendar be implemented. It even did so when Karl XII abolished the short-lived Swedish calendar and threw the country back into Julian times.

And you know what? The promise of returning daylight is just what we need when night is at its darkest – which is why St Lucia is Sweden’s favourite saint. In fact, she’s the only saint we celebrate!