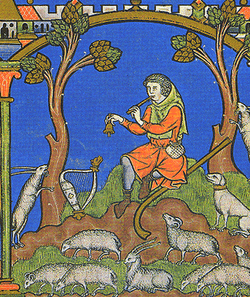 I seem to be on a woolly streak of late. First a post about tartan some days back, and today a post about sheep. Well: it’s not about sheep, it’s about wool, and seeing as no sheep equals no wool, that per definition means you cannot talk about one without mentioning the other.
Sheep have a reputation for being incredibly stupid. Not that I can boast of any in-depth relationship with a sheep, but what interaction I’ve had rather indicates that they couldn’t care less about us humans, they’re more into grazing and staring unstintingly at us if we get too close. I can also tell you they weigh a lot. With or without their fleece, lifting a sheep requires serious arm muscle.
Sheep are one of those animals that were domesticated very early on. Originally, mainly as meals-on-hooves, but over time as a source of wool, our forebears having discovered that wool is quite the thing if you want clothing that retains warmth even if it is damp. I imagine those nomads from whom we all descend quite often found themselves at the mercy of the weather, ergo damp clothes were probably a recurring event in their lives.
Wild sheep tend to be brownish. Domesticated sheep quickly went white, seeing as it is far easier to dye white wool brown than brown wool white, if you see what I mean. It was something of a lucky coincidence that white is a dominant trait – at least for our forebears who were doing their first forays into genetics – and so sheep are mostly depicted as being white. Except for the black sheep, that is. The scapegoat, if you will, the one who does not conform. (Incidentally, in Sweden the nursery song is Bä,bä vita lamm – Ba,ba, white lamb. Obviously, us Swedes don’t rate black sheep all that much…) 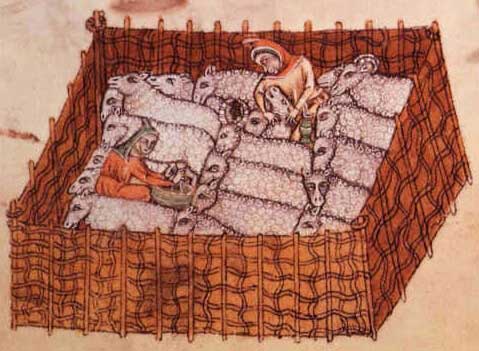 Anyway: man ambled about with his sheep, his goats. At some point, man domesticated cows and pigs, and pigs aren’t that much for ambling really. I mean, they like a good day out in the forest eating acorns, but walking long, long distances to graze isn’t quite a piggy thing. Besides, man had discovered how to sow crops, and wheat and stuff does not go walk-about, which is why man eschewed the nomadic existence to instead become a farmer. Well, not all men. Some preferred to hunt and trade their meat for whatever the farmer produced.
Over time, man began amassing wealth. Lots of land was wealth. Lots of sheep, cows, goats were wealth. Lots of wives…yes, also a sign of wealth, but hopefully even that ancient male distinguished between his sheep and his women. And I guess most men weren’t rich enough to have more than one wife, which probably markedly upped the potential for domestic bliss. Women are somewhat possessive when it comes to their men. 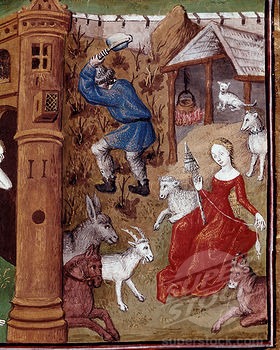 Civilisation picked up speed, and we’re going to whizz by huge chunks of it, and suddenly we are in medieval England. At the time, sheep were everywhere, one could say. Sheep were the mainstay of English wealth, the English sheep having quite the reputation for their high quality wool. Monasteries financed their human flock by keeping huge flocks of sheep, the man of the manor did the same, the income generated by the wool adding that little extra to a life mostly dominated by a lot of pea-soup and porridge. Wool was used to pay the ransom for Richard Lionheart (50 000 sacks of high-quality wool were put forward to contribute. To put into perspective, approximately 40 000 sacks of wool were exported during the peak years of the wool trade in the 14th century).
Effectively, England was a raw material producer. English sheep were sheared, the fleeces were washed, skirted, picked and bundled and transported abroad where others carded and spun after which the wool thread was woven into high quality cloth by Flemish or Italian weavers. Eventually, some of all this high quality stuff found its way back to England where it was bought by the well-to-do. The added value in this financial operation remained in other than English hands, with Flemish and Italian cloth merchants growing very fat and happy.

BUT. No wool, no cloth, no income. Obviously, there was more than English wool around – specifically a lot of Spanish wool. Truth be told, Spain was the leading supplier of high quality wool, even more so since they cross-bred English sheep with their own native breeds in the 12th and 13th century, thereby creating that jewel among sheep, the Merino. Merino wool was of superior quality to anything else on the woolly planet, and prior to the 18th century attempting to smuggle a Merino out of the country was punishable by death. Before Spain “discovered” all that gold in the New World, their primary source of wealth, just as for England, were their sheep.
So imagine you were the purchaser for a Tuscan mill. Off you went to scour the various markets for high quality fleece, and in this case you decided to skip the expensive Spanish stuff and look for a bargain elsewhere. England was full of sheep – and other merchants swooping down to buy up what they could. Chances were you might end up with no wool unless you got there early or offered a premium price. Alternatively, a new approach was needed to ensure constant supply.
The Italians, being a savvy people with an innate aptitude for trade, had already in the early 13th century developed some sort of rudimentary financial market. Initially, it was more a question of advancing money to a farmer with the future crop as collateral, but soon enough these agrarian “futures” spread to other things. Like wool. That monastery out in the wilds really, really needed a new church, but at the rate of their annual income it would take them twenty years to finance it. Enter the creative wool-buyer:
“I tell you what: I’ll advance you the amount you need, and instead you sell me your wool for the coming twenty years at a fixed price.”
“What, all my wool?” the abbot said, and then they’d haggle for a while, before agreeing on fixed quantities and fixed prices.
As a financial professional, I must admit to being quite fascinated by these very early “futures” – goes to show that trade in medieval times was, in its own way, far more innovative than we generally give it credit for. The transactions were documented – several hundreds of these contracts survive, detailing the seller, the buyer, the price and delivery schedules. Advances have been recorded, there are contractual consequences should the seller not deliver, and all in all, these are quite sophisticated financial instruments. I would imagine that in some instances these contracts were sold on, but in general the purpose was not to speculate on the price in wool, but rather safeguard its supply.
Now the English kings were fully aware of how important the wool trade was for their economy. At times, desperate times required desperate measures, which was why in the 1290s Edward I confiscated all the wool from foreign merchants in England. He then sold it again and lined his coffers with the money required to continue his bellicose efforts. Wool was also taxed, creating a nice steady revenue – soft, fluffy stuff financing hauberks and swords, war-steeds and crossbows.

Edward I’s high-handedness was quite the blow to the advance contracts on wool. And in 1337, his grandson, Edward III, attempted to create a wool monopoly, the Wool Company, with designated buyers purchasing all English wool and selling it on as it benefited the crown. Not only did Edward “borrow” the income generated by all this wool to finance his armies, he also took the opportunity of starving the Low Country textile mills of wool, thereby causing substantial unrest and poverty among the former textile workers. This was Edward’s way of punishing the Flemish rulers for their support of the French King in what was soon to escalate to the Hundred Years’ War.
Ultimately, the Wool Company was not successful, but it was definitely the death-knell to the innovative structure of the wool future, seeing as the number of new advance contracts declined sharply afterwards. 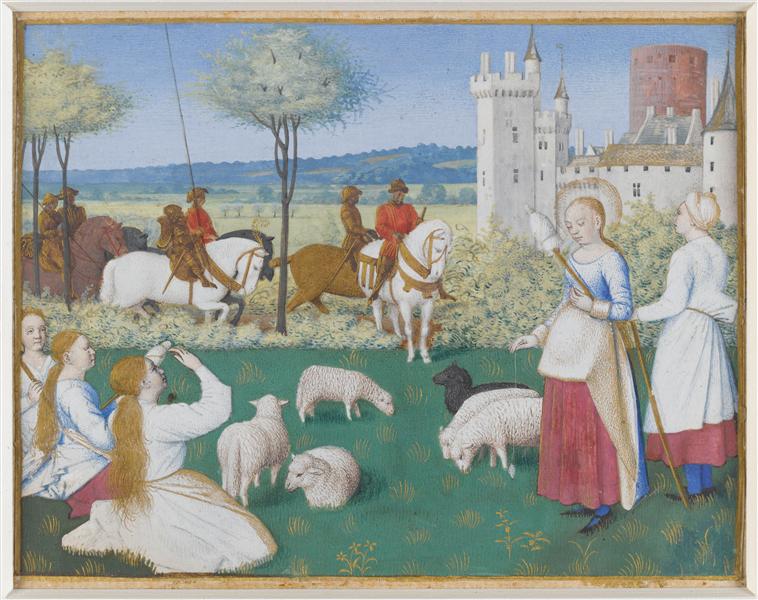 England’s wool export, however, continued to thrive, and throughout the 14th century wool remained the single most important source of wealth for England, which is why Edward III ordered that his Lord Chancellor should sit on a bale of wool, the “Woolsack”, a constant reminder to all those present that without those little critters that went ba-ba, England would plunge into obscurity and poverty.
These days, Australia is the world’s biggest wool producer, followed by the US, China and New Zealand. Together, they produce 60% of the total world production, while the UK, once such a dominant player, delivers 2% or so. And Spain is no longer on the top-ten list, although indirectly it is, seeing as the Merino remains one of the most important sheep breeds around.
P.S. Should you want to know more about the wool trade and those advance contracts, I recommend “Advance Contracts for the sale of wool in medieval England: an undeveloped and inefficient market?” by Bell, Brooks & Dryburgh (University of Reading)