My great-grandmother, Sigrid, had nine children. When she was pregnant with the last of these, her husband told her he “ couldn’t cope” and upped and left. Nice guy. And yet Sigrid never uttered one single negative word about him.
“He was a weak man,” she’d sigh. “How can I blame him for that?”
I would. As I struggled to feed my children, as I spent hours foraging for nettles in the spring and mushrooms in the fall to fend off starvation, I’d curse this irresponsible oaf that walked out on me when I needed him the most. Not once did he send money, not once did he write – it was as if he had ripped out the pages containing his wife and offspring from his book of life. While she never blamed him, her children most certainly did, a certain acidity tingeing their voices whenever they talked about their father. Him disappearing caused them to grow up in poverty, any dreams of studying beyond the seven years of mandatory school crushed by the need to begin earning money.

The above isn’t uncommon, not then, not now. Women and their children are abandoned every day, left to cope while the male butterflies that populate the world flutter on to new, prettier flowers. Not that I’m insinuating all men are butterflies – no way. Most men are conscientious and devoted fathers, but when a parent does walk out it tends to be the father, not the mother. Maybe this reflects the prevalent view that children are mainly the mother’s responsibility – that’s how things have been ordained throughout the ages. Or maybe this just proves that some boys never make it over the threshold to manhood. Interesting, isn’t it, that while all girls chafe at the strings that hold them back from becoming adults too soon, quite a few boys never want to make that transition (Peter Pan f.ex). This just goes to show that women are much more realistic than men – the romantics in this world are men rather than women.

I have often wondered how my great-grandfather, Carl, explained his behaviour to himself.
“Like a rabbit; the dratted woman kept on getting pregnant” must have fallen flat, given that he was an active participant in the actions leading up to babies.
“She’s better off without me.” Well, even Carl couldn’t believe a lie the size of an elephant, could he? No, he knew that leaving his family was the equivalent of condemning them to the poor house – and his wife to the silent insinuations that somehow she must have been to blame, because Carl was such a nice and upright man.
“I have dreams to fulfill, places to see! She was choking me, holding me back, and all those children … I never wanted more than two!” Huh. And what about her dreams? Or did he believe being the single mother of nine kids was her favourite fantasy?

All those men who walk out leave a wake of abandoned children behind. Sons who will either emulate their father’s sorry example, alternatively become ferociously protective of their future offspring. Daughters who will have no standard against which to measure their future husbands and probably end up marrying men as good for nothing as their own father was. Children who become adults far sooner than they should as they try to help their mother – if they don’t take off the moment they can, sick and tired of growing up with mothers who can never quite make ends meet.

Sigrid’s life became a nightmare. Her eldest daughter was taken in by Sigrid’s parents, the younger children she had to cope with on her own – including the newborn baby. The whole family lived in a one room accommodation – not so uncommon at the turn of the last century, but a come down for Sigrid, raised on a well-to-do farm before marrying her successful engineer husband.

Somehow Sigrid coped – most mothers do, don’t they? Let me rephrase that; somehow most single parents do. Despite financial uncertainty, despite going bowlegged with the weight of responsibility on their shoulders, they struggle on, putting the well-being of their children first. Testament to just how successful Sigrid was in creating a warm, loving home are her children (well; were. Most of them are dead by now). I’ve grown up hearing stories about her, stories told with so much love and admiration for this woman who never bewailed her fate. Sigrid was one smart lady; instead of drowning in a sea of bitterness, she rolled up her sleeves and got on with her life. It must have been horribly hard at times, but Sigrid didn’t expend her energy on complaining – she invested her time and efforts in her children.

All over the world, single mothers today are doing just that, sacrificing their dreams and hopes so that their children can continue holding on to theirs. And today the burden on the single parent is higher, because most of us live far away from kin and relatives, the extended family that once acted as a social safety net round people like Sigrid no longer exists. The least they deserve is a flower to cheer them up … (And this is one stubborn rose, flowering despite the snow!) 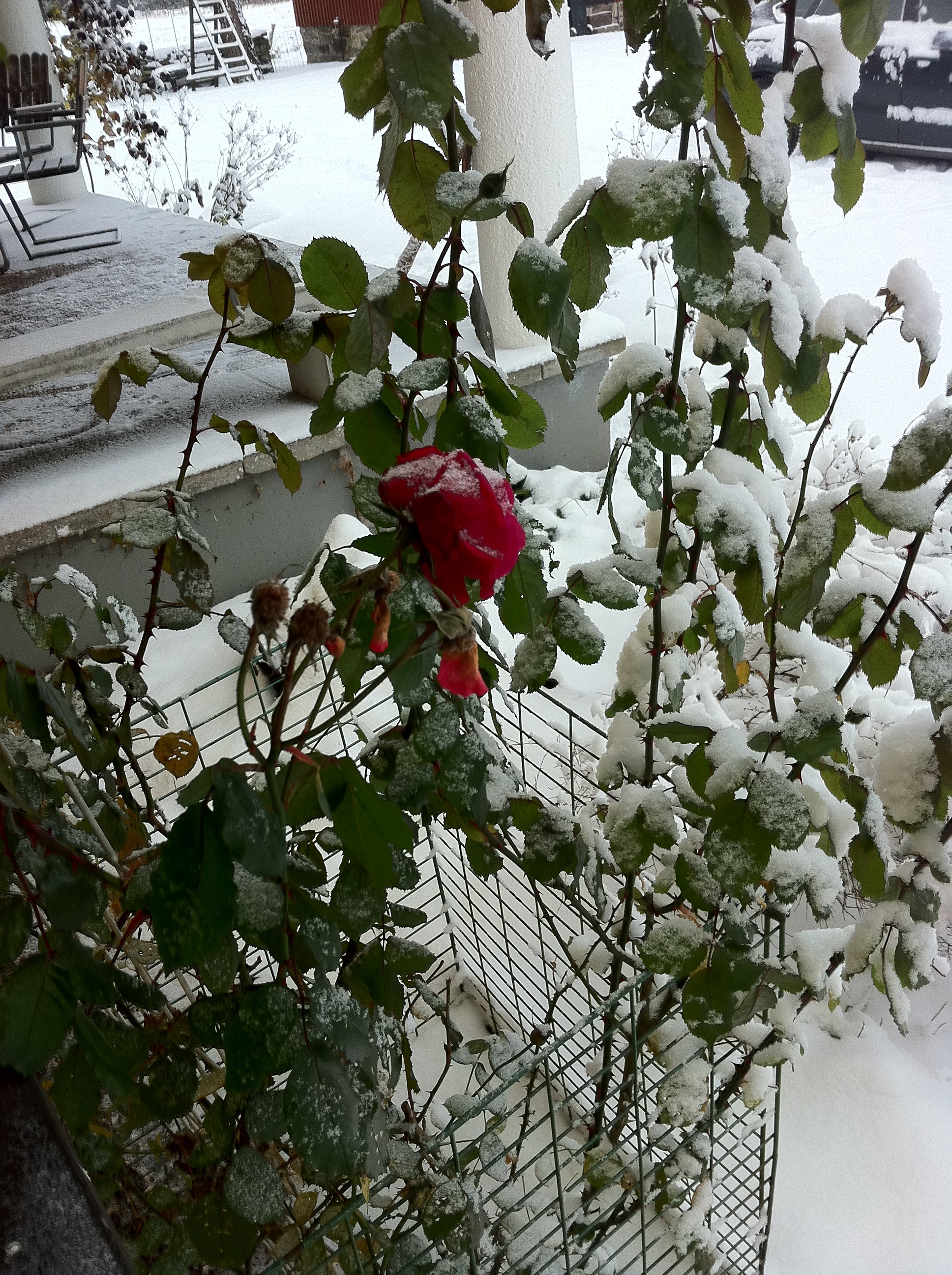 So what about Carl, what happened to him? According to my mother’s uncles, the man moved very far away and remarried – wait wait; became a bigamist, as he never divorced Sigrid. There were two new children, and Carl settled down to a life of structured peacefulness, far removed from the life Sigrid was living. Nowadays I tend to agree with Sigrid. Carl was weak, not bad, and so he deserves pity rather than ire. Besides, I’m sure he spent many a sleepless night thinking about his Sigrid – nine children in thirteen years speaks of an element of passion.

All the people presently on this planet have a common denominator, we had an ancestor like Sigrid. Our forebears did not collapse to freeze in the snow, despite advancing ice age, sabertooth tigers and other challenges they soldiered on. They didn’t say “WTF” and take off when for the third time in one year their crops were consumed by locusts. They didn’t shake their fist at the sky (well, maybe they did) and yell “Enough! I’ve had it!” whenyet again the dratted wolf took their sheep. When teh going got tough, these our progenitors didn’t stop walking. They might have had to crawl at times, there were days when it was touch and go, but ultimately they gritted their teeth and never gave up. Like Sigrid, they endured, holding on to the hope that tomorrow would be better than today, if not for them, at least for their kids. In many ways, Sigrid wasn’t anything out of the ordinary, she was just another mother. Just another mother … Where would the world be without mothers, without fathers?  I guess that’s what life boils down to in the end; being a good enough parent to see your children safely on their way, hoping they will do the same for their childen, an endless chain of offspring extending into the future. Just another mother … what better epitaph can there be?

1 thought on “Just another mother”