In a previous post I told the story of Marie de Blois. This lady was an abbess, seemingly content as a nun, when she became the heiress to Boulogne, thereby attracting the unwanted attention of one Matthew of Alsace who abducted her, forced her to marry him and fathered two girls on her before submitting to the church and returning a somewhat tarnished Marie to her religious life. 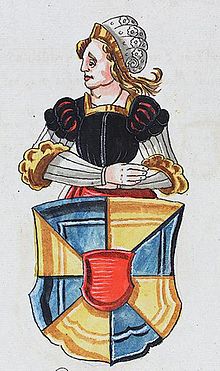 Today, I thought we’d spend some time with Marie’s eldest daughter, Ida of Boulogne, who was as wealthy and as tempting an heiress as her mother had once been. Obviously, suitors were lining up for her hand in marriage from the moment it became clear she was the legitimate heir to Boulogne. In 1181, Ida married one of these gentlemen, in accordance with the wishes of her uncle, Phillip of Flanders. But her first spouse, Gerald, was not long for this world, and no more than a year later, Ida was back on the marital market. (And thank heavens Ida’s mother wasn’t around by then: she’d have been quite distraught by what would happened to her daughter…) This time, Ida’s new husband was a certain Berthold, close to 35 years older than her.
Whether the Berthold and Ida union developed into a winter-spring romance is unknown. What is known is that Berthold expired already in 1186, and so Ida was back to being a merry widow. By all accounts, Ida was rather merry—and more than eager for an amorous adventure. As per Lambert of Ardes, her roving eye fell on the handsome and Arnold of Guines and she fell passionately in love, doing her very best to seduce dear Arnold. Not that Arnold seems to have been averse to the idea. According to Lambert, he either loved Ida back or pretended to do so, his eye on the tempting prize of Boulogne. What can I say? Men!
However, the Ida and Arnold union was never to be, no matter how they batted their eyelashes at each other. Instead, a certain Renaud de Dammartin entered the scene, his eyes very firmly affixed on the marital prize that was Ida.
Initially, Renaud attempted to advance his suit through the normal channel—he spoke to Ida’s uncle, the Count of Flanders. This gent probably looked the young Renaud up and down and smirked before showing him the door. After all, Dammartin may have been of good French noble blood, but his family was not exactly rich and powerful. Plus, of course, Renaud had a wife. Well, he’d had a wife until he set this inconvenient appendage aside and decided Ida was more to his taste.
Seeing as Renaud’s spurned wife was a cousin of Philippe Augustus, the French king, I dare say we can assume the French king was aware of Renaud’s intention to wed Ida. Not, according to Philippe Augustus a bad idea, as by doing so Renaud would bring Boulogne under the influence of the French king rather than the Count of Flanders, and Philippe Augustus was rather fond of expanding the territories he controlled—a sentiment he shared with most of his contemporary kings. 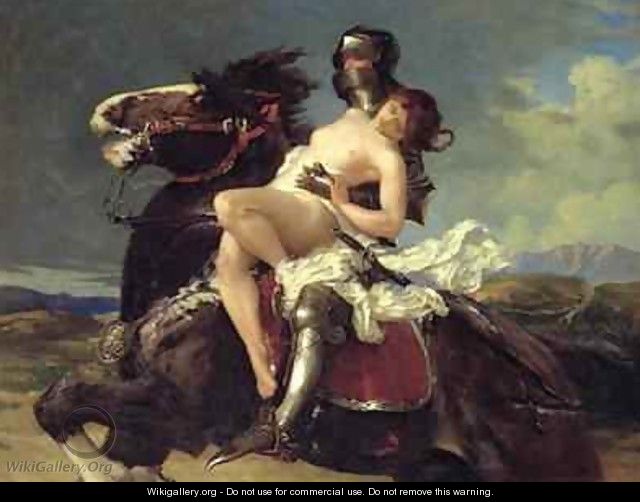 As you’ve already gathered, Renaud was all for expanding his own territories, and the fact that his bride was some years older than him was no deterrent. In view of the Count of Flanders’ opposition to the match, Renaud decided to take matters in his own hands and resorted to the age-old tradition of abducting his intended and carrying her back to Lorraine with him. How unwilling Ida was is something we don’t know. By all accounts, Renaud was the medieval version of Dark & Dangerous, and some women just can’t resist such men.
Whatever the case, by the early 1190s Ida was wed to Renaud, and there is even a little story whereby the love-sick (or seriously pissed off at having the prospect of ruling Boulogne stolen from him – take your pick) Arnold rode after her but was lured into a trap and imprisoned, supposedly with Ida’s collusion. Whether this is true or not is difficult to assess. What is indisputable is that Renaud became Count of Boulogne through his wife and soon enough there was a little daughter, Matilda.
This Renaud is one of the more fascinating characters of the late twelfth century. Of an age with Philippe Augustus, he was raised with the future French king, and by all accounts Renaud and Philippe Augustus were firm friends—until Renaud was ordered by his father to join the Plantagenet side in the endless conflicts between the Angevins and France.
Somehow, Renaud and Philippe Augustus managed to salvage their relationship, and as the Plantagenets spent most of the 1180s fighting each other, Renaud did not end up in the unenviable position of having to meet his friend in battle. In 1189 Philippe Augustus joined forces with Richard Lionheart (likely Renaud was with Richard) and together these two young lions crushed the aging Henry II with Renaud in the happy position of not having to choose between his present master (Richard) and his liege-lord (Philippe Augustus).
By the time Renaud carried off Ida, he already had a reputation as a skilled fighter and leader of men. He was also fond of the good life and was something of a patron of the arts, a true renaissance man before the term was even invented. I imagine that after the somewhat decrepit Berthold Ida appreciated her young and vibrant husband, albeit that there must have been moments when Renaud’s continued allegiance to Richard caused Ida moments of severe worry.
As many of you will know, the Richard & Philippe Augustus relationship crashed and burnt when these two kings went off on a crusade together. Philippe Augustus did not like it that Richard hogged all the glory, and so he abruptly left the scene and returned to France. Once Richard had made it back home (and an arduous journey that was, what with being locked up by the Holy Roman Emperor for 18 months or so while his mother collected the huge ransom demanded to set Richard free) he spent the rest of his life waging war on Philippe Augustus – with Renaud on his team.
Fortunately for Renaud, Richard died already in 1199. This was most unfortunate for a lot of other people, but I imagine Philippe Augustus did a happy dance, while Renaud wept for a while before taking the opportunity to mend his fences with his king. Philippe Augustus welcomed Renaud back with open arms, even more so when some years later Renaud was instrumental in taking Chateau Gaillard from the Angevins. Renaud ended up showered with honours and lands, and life was good to Renaud and Ida. For a while.
In 1211, Renaud refused to appear before Philippe Augustus in a legal matter. Philippe Augustus retaliated by seizing Renaud’s lands. A wiser person might have recognised this as a moment when it would make sense to do some brown-nosing—after all, so far the French king had always forgiven his dear childhood bestie Renaud—but Renaud was having none of it. Miffed, he decided to renew his alliance with the Angevins, more specifically John.
How on earth Renaud came to the conclusion that John was a safer bet than Philippe Augustus I have no idea. But suddenly Renaud was riding to war against his liege-lord and this time Philippe Augustus was enraged. This time, Philippe Augustus vowed, Renaud would pay. This time, Renaud de Dammartin was branded a traitor.

At the Battle of Bouvines Philippe Augustus smashed any hopes the Angevin kings might have had of regaining their lost lands. Not that King John was anywhere around when his nephew, Holy Roman Emperor Otto, and his half-brother William Longsword together with Renaud and Ferdinand of Portugal (and Flanders) met the French army.
With roughly 9 000 men on either side and the excellent Flemish infantry under the command of Otto, at first things did not go well for the French, whose undisciplined infantry lost heart when faced with the Flemish. Philippe Augustus had no choice but to join the battle himself, leading his cavalry in a charge that broke the Flemish infantry and almost cost him his life.
Soon enough, the French had their enemy on the run—except for Renaud. With a group of around 700 Brabant pikemen, he made his stand, having every intention of selling himself dear. I guess he knew that this time there’d be no mere slap on the fingers should Philippe Augustus take him prisoner.
For hours, Renaud and his men stood firm, no matter what the enemy threw at them. Long after the battle was over they refused to yield, a knot of desperate men surrounded by a sea of blood and death. Ultimately, of course, it didn’t help. Philippe Augustus ordered 3 000 men to charge the stubborn Renaud and his men. Under such force, the brave Brabant pikemen buckled, and in the resulting melée Renaud was not killed. Much, much worse, he was taken captive and hauled before the French king.

What Ida thought of all this we don’t know. I dare say she was less than delighted when Philippe Augustus stripped Renaud of all his honours, all his lands, and instead gave them to his bastard son Philippe Hurepel. But at least she had Boulogne, albeit that the French king was keeping a very narrow watch on things. If Ida interceded on behalf of her husband is yet another thing we don’t know. I think she realised it would have been fruitless, but maybe she at least requested to be allowed to see him? Somehow, I suspect the answer was no…
Ida died some years after the Battle of Bouvines. Boulogne passed to her daughter Matilda, but Philippe Augustus was not about to let this juicy morsel pass him by, which was why Matilda was given to Philippe Herupel as his wife. One wonders how that must have felt, to marry the son of the king that presently held your father locked up in the dark somewhere.
As to Renaud, he was to live out the rest of his life in very harsh captivity. Legend has it that he was kept chained to the wall by a chain so short it made most movements impossible. Legend also has it that when he realised he would never be released—not even after the death of Philippe Augustus—he committed suicide, killing himself on the anniversary of Ida’s death. One last flamboyant gesture or an act of despairing love? We don’t know. We will never know.

3 thoughts on “The abducted heiress and the gallant traitor”