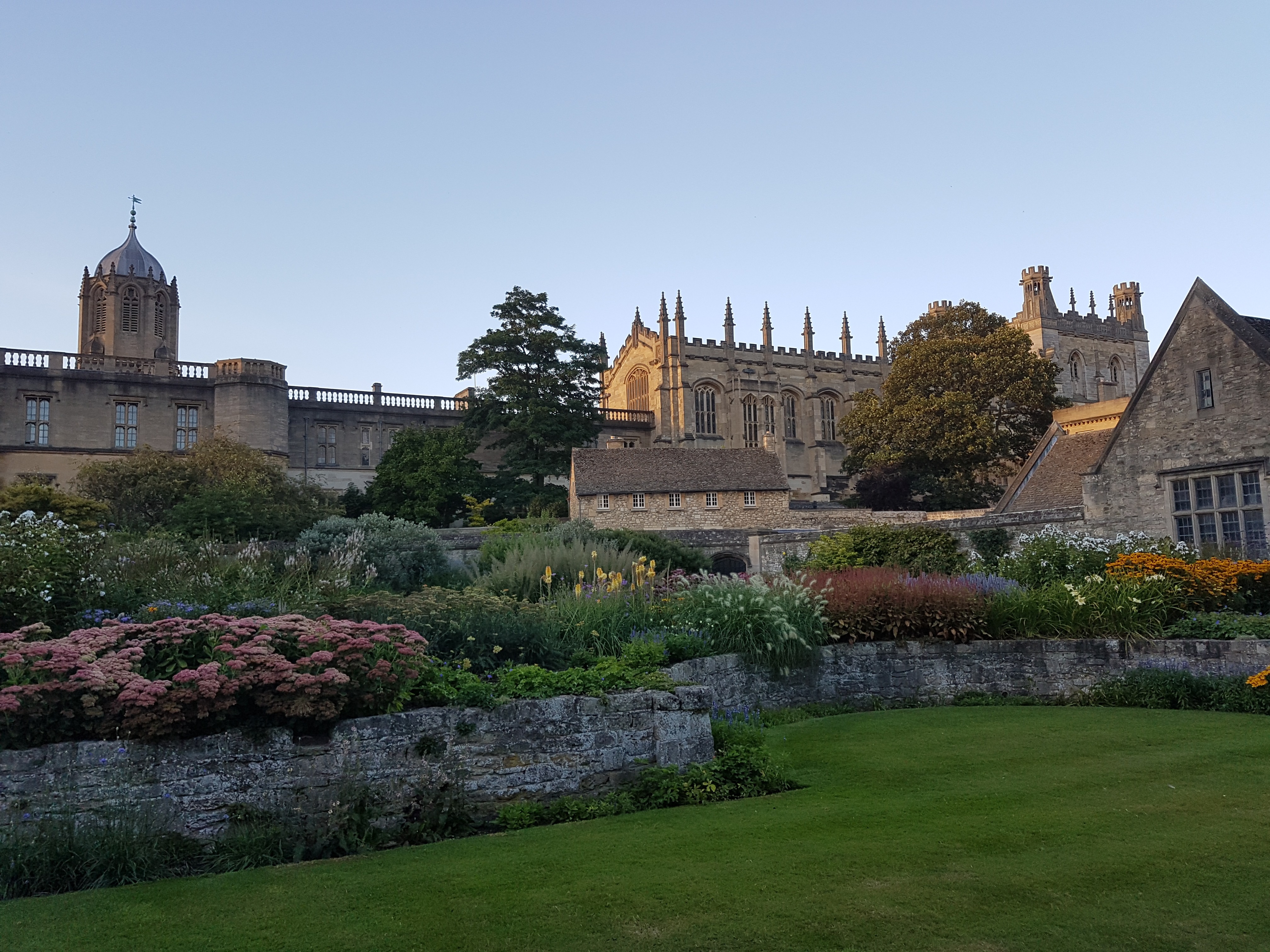 I have recently been in Oxford. Hubby and I have been excited for months about going to Oxford, and as both of us are avid Morse and Lewis fans, we were expecting to see a city defined by little bridges over various waterways, punters propelling boats laden with languid girls and huge picnic hampers forward, very many pubs set in pastoral surroundings, plus the ubiquitous yellow stone which gives Oxford that soft gilded look.
There’s a lot of golden stone. Yes, there are bridges, but not all that many are quite as picturesque as the ones that feature in the TV show. And there are very, very, very many buses. Like an army of buses. Never see them on telly. Never hear the noise they make – or inhale the exhausts. Okay, okay: I know that TV programs rarely smell – but even if they don’t, the visuals convey an expectation of smell. Take Poldark, for example. You see Aiden Turner, and you know he’ll smell of leather and horse and warm linen (or damp wool).  You see John Thaw as Morse, zooming about in his Jaguar, and you do not think exhausts. You think a subtle male after-shave with patchouli or sandalwood tones, you think of the smell of stale tweeds, of crisp cotton shirts. So somehow, buses never figured in our preconceived view of Oxford.
(And as an aside, will someone please teach Aidan Turner to scythe? Yes, he is bare-chested, yes, he is sweaty and sexy, but you can get all that and still handle the scythe properly. Neither here nor there, in this post about Oxford – but I blame it on BBC and their gearing up to Poldark Season 2) 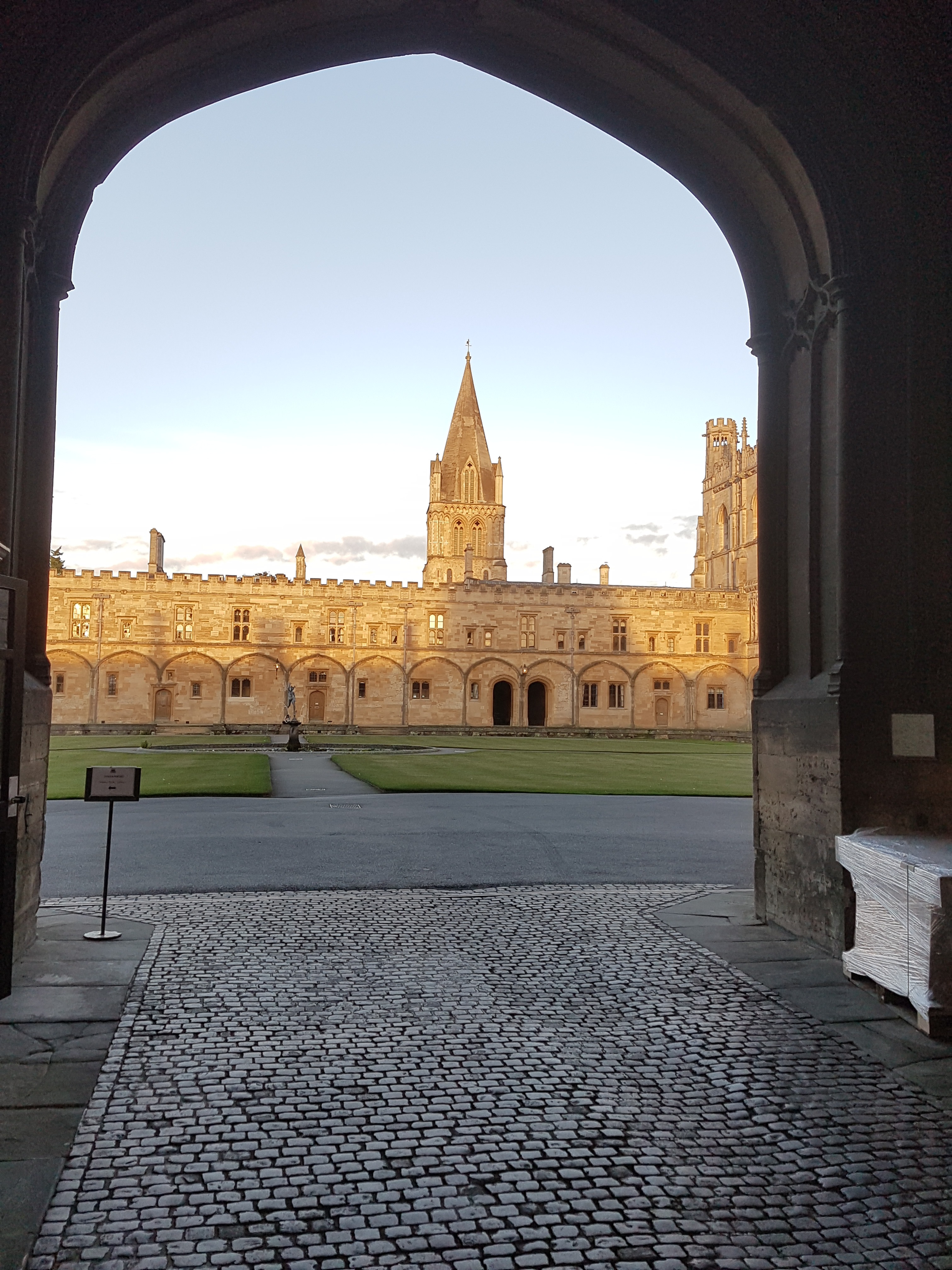 Back to Oxford as a crime scene: after one day’s 20 kilometre walk (following upon 22 kilometres the day before) I am happy to report that Oxford offers a plethora of possible kill spots, so in this aspect we were not disappointed – at all. There a pool of muddy water that could easily hide a body or two, here a canal path where a late night wanderer could be bludgeoned to death. There are an endless source of beautiful green college quadrant just waiting for a body to be neatly displayed atop the grass, and the glorious Oxford building themselves are like unmarked canvases, waiting for a suitably gruesome – if elegant – murder. Thick foliage along the waterways, numerous bridged from which to hang someone – yes, all in all, most satisfactory.
Also, Oxford offers an impressive intellectual resource. Murderers who are shaped while quoting obscure Greek tracts or while exploring genetic algorithms will not stoop to something as simple as shooting someone and then toss the gun in the water. Actually, in the UK shooting someone isn’t all that simple, as gun laws make access to guns fairly difficult. But still: murderers who decline Latin verbs instead of counting sheep to fall asleep have the potential of offering something extra in their Modus Operandi, don’t they?
So I guess it all comes down to the buses – and the fact that nowhere did we spy a maroon Jaguar, or a harried Lewis with Hathaway in tow. But in the end, it didn’t matter all that much, as we feasted our eyes on so much beauty – and history. 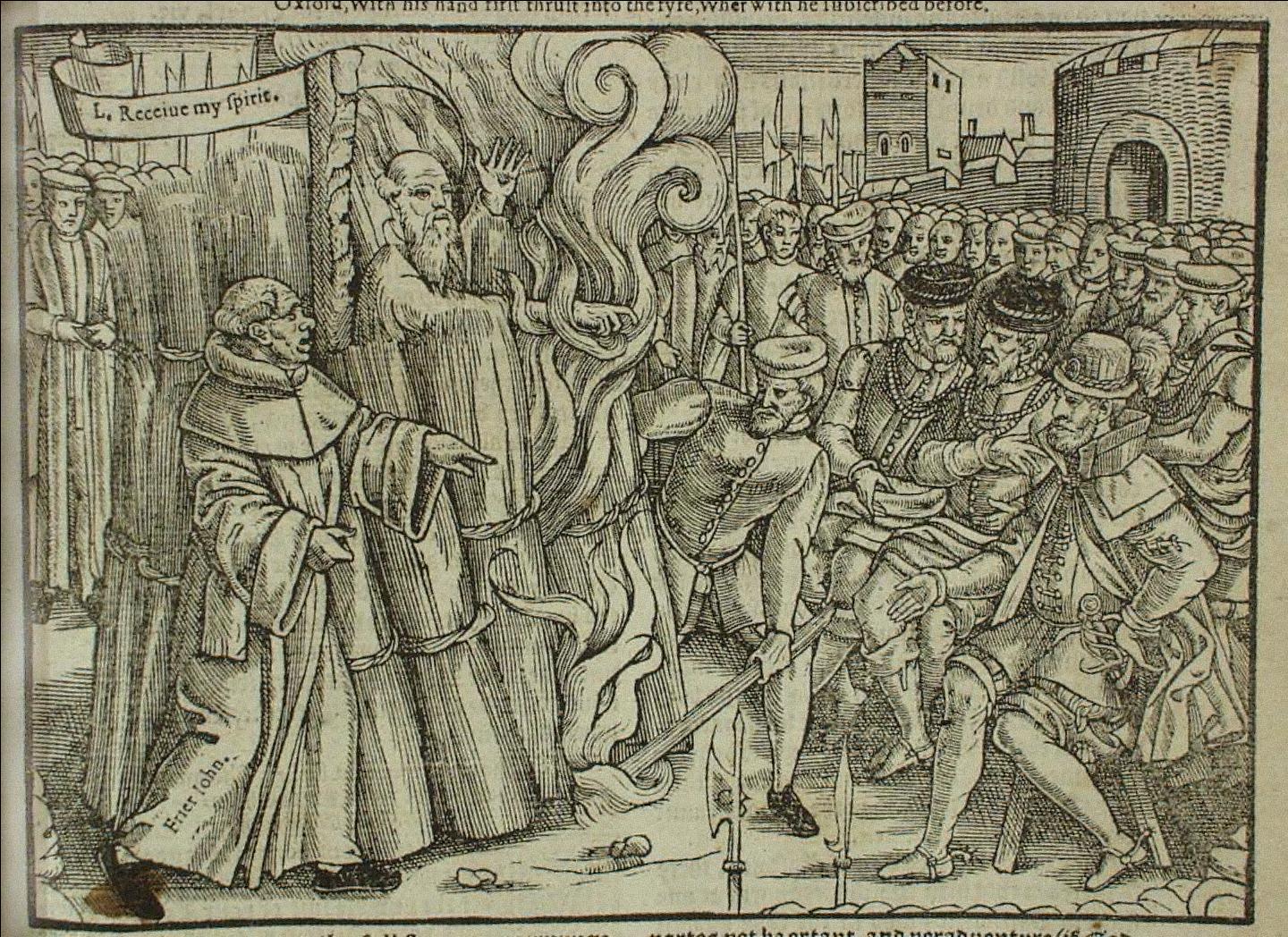 I saw the spot where, in 1556,  Thomas Cranmer decided to retract all his previous recantations – and how brave is that, when you know that standing by your beliefs will see you burnt at the stake? Mind you, the Archbishop had been doing quite some recanting for some time after seeing Latimer burn as a heretic, but so far those recantations had not saved his life – Mary I was determined to make an example out of the men who’d masterminded the birth of the Anglican Church – but at least he’d have been spared the fire. Still: on the day of his execution, Thomas Cranmer found his guts and told the assembled people that he now recanted all his recantations, that the pope was the equivalent of Antichrist, and that he would be more than happy to burn for his faith, ensuring the hand with which he’d signed the previous recantations burned first. So up he went in flames, and the Anglican church had one of its first martyrs. 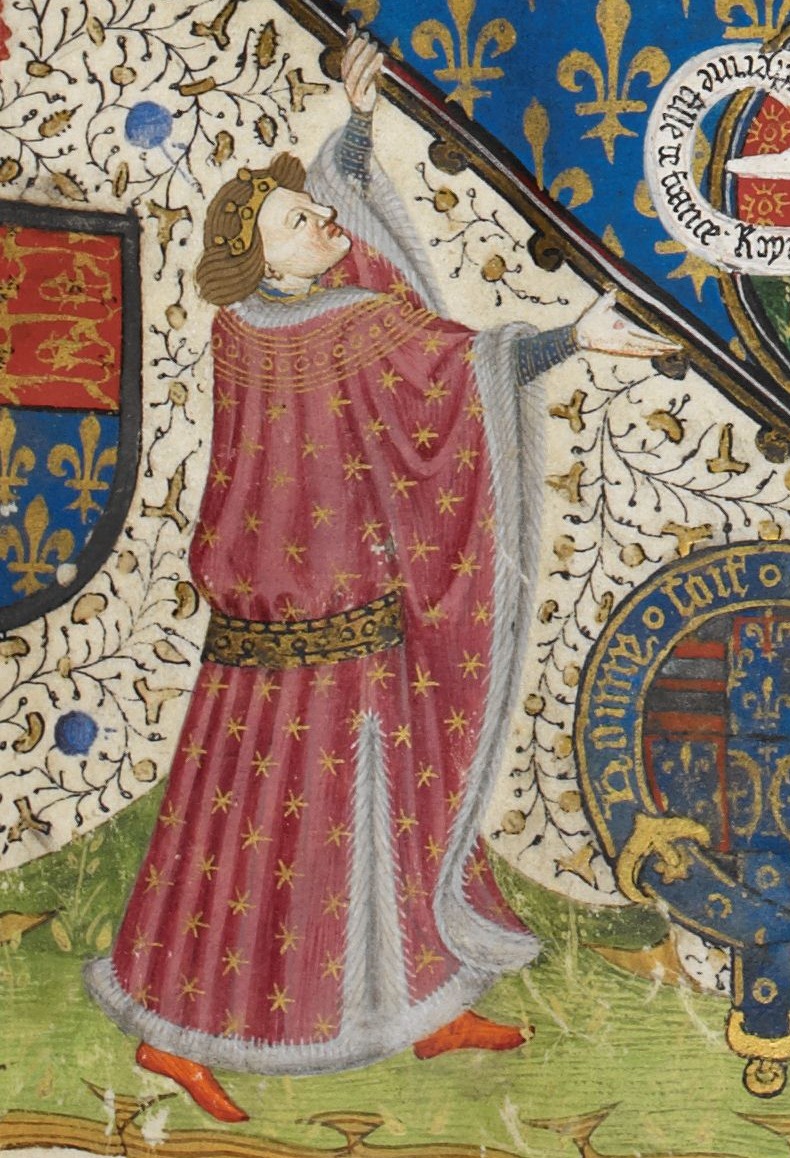 I stood in awe inside the Bodleian, thinking that Humphrey of Gloucester would approve of how his precious collection of books had been housed. Humphrey is a deliciously complicated character – a scholar educated at Oxford, the son, brother and uncle of kings all named Henry. Astute and gifted with obvious diplomatic skills, he was also an accomplished military leader, actively taking part in Henry V’s campaigns in France. Sadly, these days he is mostly remembered for his second wife, Eleanor Cobham, who was accused of using witchcaft in an attempt to kill the king (by then a weak and confused Henry VI) so as to replace him with her husband. Eleanor was obliged to do public penance, divorce her husband, and was locked up for the rest of her life. Humphrey took the resulting scandal badly and retired from public life, submerging himself in his beloved books – the ones that were then gifted to the embryonical Bodleian library (at the time, it wasn’t called the Bodleian – that came later). I am guessing this learned, if tragic,  15th century duke would have gambolled about like a lamb on a spring meadow had he been able to see just how many books the Bodleian now contains. 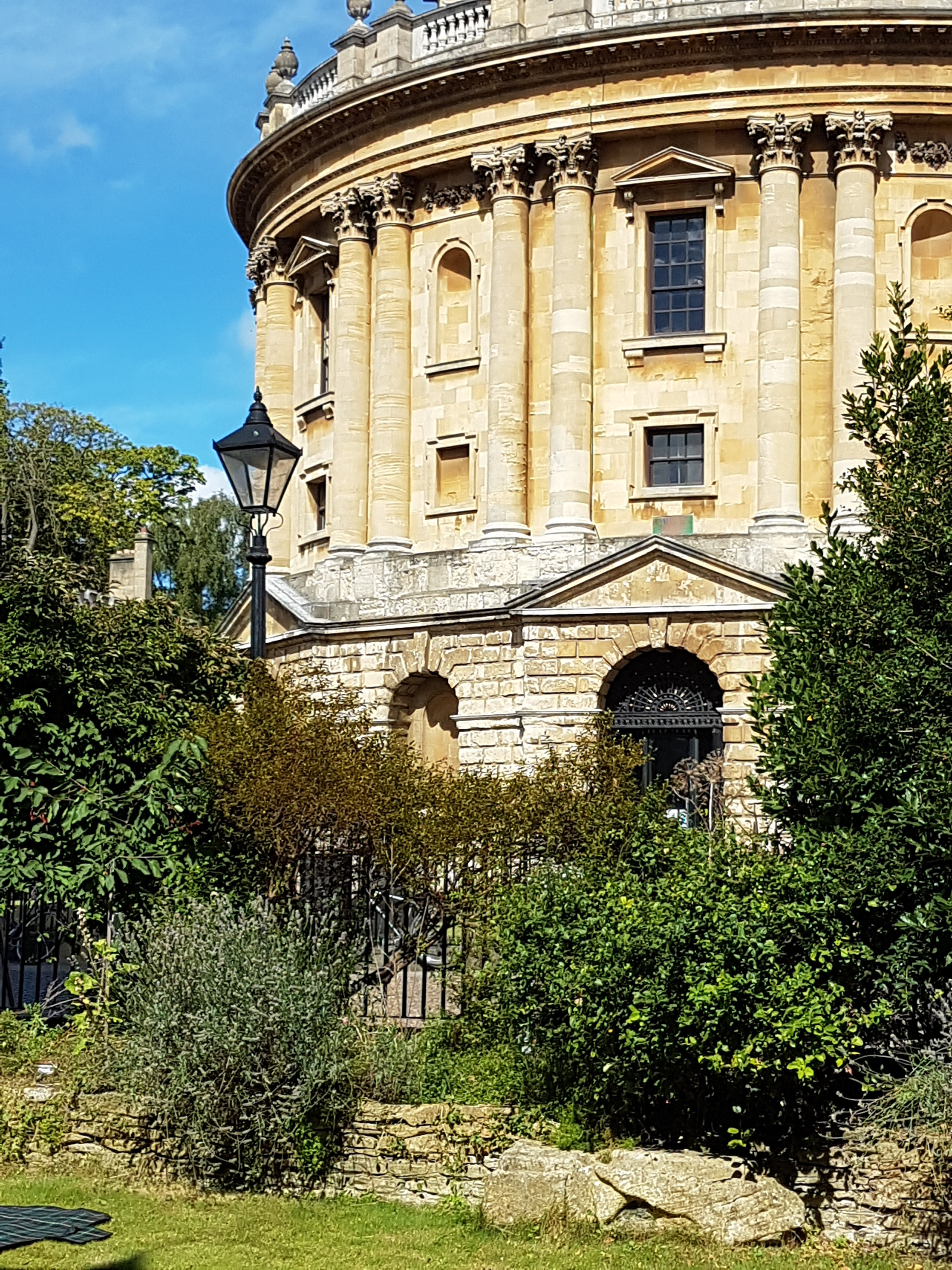 We drank tea while gawking at the Radcliffe Camera, walked my way through one more narrow street after the other. Inside the Cathedral, I made happy sounds at the patch of restored ceiling which gives us a glimpse of what a church would have looked like pre-Reformation. Red and green and blue and white and red, and the walls would have been crammed with depictions of Bible stories. Medieval life was nothing if not poly-chromatic.
In the cathedral, I also saw something I’ve never seen before: a guard box. Set some distance from the floor, this was an ornately covered wooden box that would fit a man or two, adequately hidden from sight while spying on those that came to kneel before the tomb of St Frideswide. This saint was a most pious 7-8th century lady who is the patron saint of Oxford and has the distinction of choosing God before a royal husband, hiding among the pigs to evade her determined spurned groom, and founding an abbey once said groom gave up (either due to death or being blinded, depending on which version you believe). Should any of those devout pilgrims at her tomb succumb to the desire of attempting to help themselves to a little relic or two, the gent in the box would go “Aha! I see you, and now I’ll have you hauled off to hang.” I imagine it sufficed with having the box there – a bit like present day speeding cameras that do not always contain a camera, but still have a most deterring effect.
In summary, our endeavour to find Morse turned out to be a most pleasant and educational one – bar all those buses. But I must admit that every time we turned a corner, I was hoping for a glimpse of the grumpy inspector and his loyal shadow. Or Hathaway. I rather like him. On the other hand, not finding them gives me a fantastic excuse for returning to Oxford at some future date in yet another (futile) attempt to find them.

10 thoughts on “Where is Morse? Of a visit to Oxford”