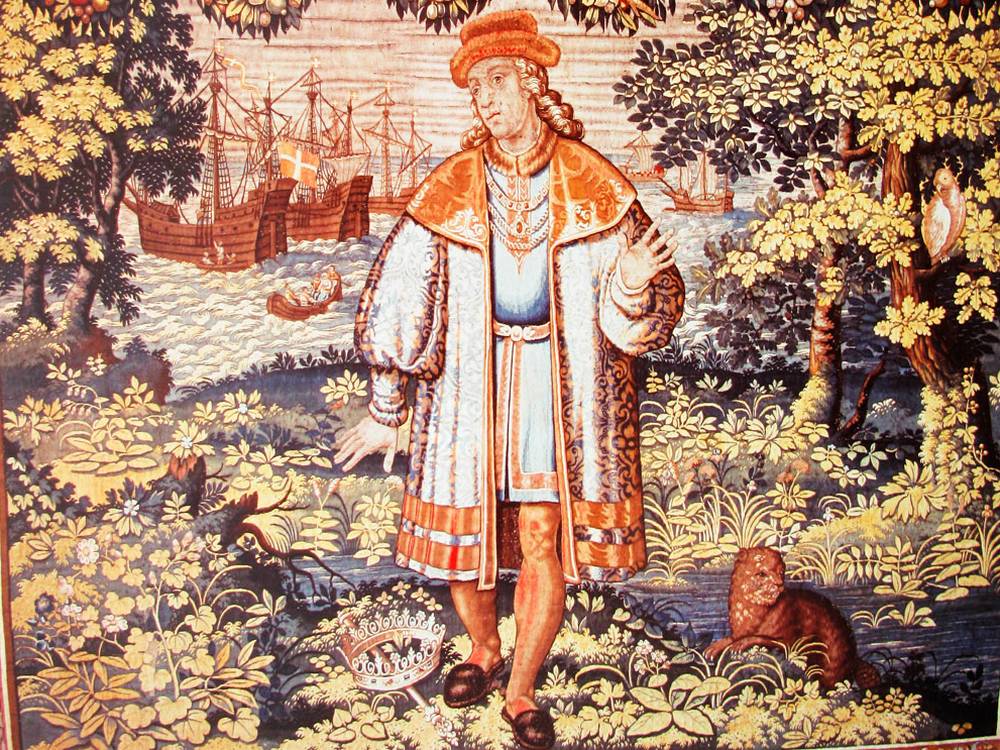 In a recent post, I wrote about Margareta of Denmark, a rather impressive woman who ended up as the de facto ruler of Sweden, Denmark and Norway.

When Margareta died in 1412, her adopted son Erik of Pommerania took over the reins of government, and I suspect this thirty-year-old man was more than thrilled to be calling the shots on his own. After all, living under the thumb of someone as competent as Margareta must have been a chore.

By all accounts, Erik was a handsome man. Close to 190 cm tall, he had an impressive physique that helped when he needed to display his royal attributes. He also seems to have been an intelligent man, and in many ways he held ideas well before his time – not something that endeared him to his contemporaries, rather the reverse.

Erik’s reign is a turbulent and messy part of Scandinavian history. His kingdom(s) was beleaguered by the Hanseatic League and the Teutonic Knights. His reforms were met with grumblings by the privileged classes, and his attempts to centralise the government of his three kingdoms in one place caused loud complaints. Without going into detail, let’s just say that while Erik began as a king he would end as an embittered pirate, exacting his revenge on every Hansa ship he could find.

Whatever one might think of Erik, he most certainly does not qualify as a footnote in history. His wife, however, does.

Philippa of England was the daughter of Henry IV of England, born some years before her father was forced into exile by his royal cousin, Richard II. As we all know, Henry returned in July of 1399, officially to reclaim his ancestral lands. As we also know, Henry didn’t stop until he had deposed his cousin and made himself king instead.

In difference to Richard II, Henry had a nursery full of children he could use to advance his interests. He seems to have been a devoted father – something he inherited from his own impressive father, John of Gaunt – but ultimately royal children had an obligation to marry as was best for the kingdom, which is why little Philippa was betrothed to Erik. She was a child, he was a young man – not an unusual situation in the Middle Ages. At the age of 12, little Philippa was dispatched to her new kingdom. It is said her father was grieved to see her leave, and I suppose the child-bride herself would have suffered major qualms upon boarding the ship that was to take her away from her home. Being a good daughter of England, I imagine Philippa may have wept in privacy – but never in public.

A young girl arrived in Copenhagen in the autumn of 1406, and some weeks later the child was married to her much older bridegroom in the city of Lund (these days a Swedish city. Back then very Danish…) That royal wedding actually set a future trend: little Philippa was all dressed in white, and while it would be centuries before other women cottoned on, these days a white wedding dress is de rigeur.

Royal brides were expected to give their husbands heirs. With a bride as young as Philippa, the marriage was not consummated immediately, but at some point the English princess must have been deemed old enough to take her husband to bed. And as there seems to have been some affection between the spouses, maybe Erik took to visiting his young wife often, but whatever the level of activity, initially Philippa did not conceive – or at least not to the point of it ever becoming public information.

We don’t know much about Philippa, but from what little we can glean, she was mostly situated in Sweden (all her dower lands were in Sweden) which she ruled more or less on her own. At times, she acted as her husband’s regent in the other Scandinavian kingdoms as well, and general opinion seems to be she did a good job of it. The queen was well liked, she was handsome and kind, and all that was truly missing was that elusive heir.

Due to the political turbulence of the time, King Erik was often away on one mission or the other. Being at loggerheads with the powerful Hanseatic League, made it politic to now and then sort of go AWOL. Every time he was out of town, he surrendered the royal seals to his wife. Given that Philippa mostly lived in Sweden, and Erik was on a constant perambulation from one kingdom to the other, now and then with an excursion into other foreign countries, I get the impression the royal couple was not exactly welded at the hip – but that was not particularly unusual in a world where heiresses married heirs with huge landholdings to manage between them.

After years of no babies, Philippa was suddenly confirmed as being pregnant. She was almost 35 years old at the time, and for a first time mother in the 14th century, she was considered quite old. People worried about her health and that of the child – fears that proved correct when the queen was delivered of a stillborn son. In January 1430, Philippa died. She’d been queen of the joint Scandinavian kingdoms for more than 23 years – years in which we must assume her Englishness was submerged under the culture and language of her new homeland. She lies buried in the convent of Vadstena – yet another great reason to visit this picturesque little Swedish town, once the seat of so much royal and spiritual power – and no one really knows who she was anymore.

So lived and died a woman very long ago, leaving little trace in history. Except, of course, for that incident in Copenhagen. The Danes have a  special place in their hearts for Queen Philippa. Why so, you may ask, and it all comes back to the events of 1428, when the Hanseatic League attacked Copenhagen in full force. At the time, King Erik wasn’t in residence – some of his less than impressed subjects insinuate this was very much on purpose, the king had simply fled. I’m not so sure I believe that, seeing as Erik had a long-standing ongoing powerstruggle with the Hansa people. Whatever the case, Erik wasn’t at home. His wife, however, came to the rescue. As described in one of H.C. Andersen’s stories, Queen Philippa rallied the Danes, showing her “royal heart and royal courage” as she stood on the barricades and cheered the defenders on. With her blond hair whipping about her face (artistic licence, people. The lady may have been brown haired or bald – we simply don’t know) she helped her subjects hold fast against the wannabe invaders. And once the Hansa ships has been adequately trounced, the fair lady went among the sick and wounded, tending them with her own hands.

In conclusion, I suppose Philippa proves that no one is ever a foot note, because all of us have done something that affects other people and therefore history – in one way or the other. Philippa helped inflict defeat on the previously so powerful Hanseatic League. A turning point – one of many, to be sure – that would result in the eventual demise of this merchant oligarchy. Not bad, for a woman relegated to the fringes of history.

6 thoughts on “A footnote in history”